Judge Andrew Napolitano
|
Posted: May 05, 2016 12:01 AM
Share   Tweet
The opinions expressed by columnists are their own and do not necessarily represent the views of Townhall.com. 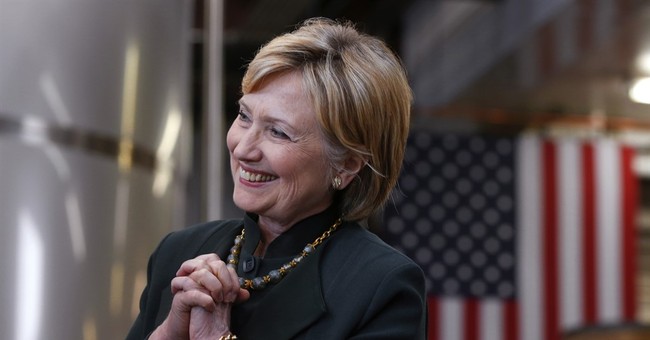 Last weekend, Hillary Clinton dispatched her husband, former President Bill Clinton, to offer a defense of her alleged espionage. The espionage allegations against her are that in order to escape public and Obama administration scrutiny, she had all of her emails as secretary of state diverted from a secure government server to a non-secure server in her home in Chappaqua, New York, and, in so doing, failed to protect state secrets in at least 2,200 instances during her four-year tenure.

The essence of her husband's defense is that the secrets were not secrets when she saw them and the investigation of her is all "a game."

We know that the FBI is getting closer to Hillary Clinton, because Bill Clinton had not addressed her email issues publicly before last weekend. The defense he offered belies the facts and the law.

He argued that prosecuting his wife over her emails is akin to prosecuting someone for driving a car in a 50-mile-per-hour zone at 40 mph because the police have arbitrarily and without notice changed the speed limit to 35 mph.

The implication in his argument is that Mrs. Clinton's emails were retroactively classified as confidential, secret or top-secret after she received or sent them and therefore she had no notice of their sensitivity.

His argument is unavailing for two reasons. The first is that it is untrue. Emails are confidential, secret or top-secret at the time they are created, whether marked or not.

The second reason is that Mrs. Clinton signed an oath on her first full day as secretary of state -- after she received a two-hour tutorial from two FBI agents on the proper care and lawful handling of state secrets. In that oath, she acknowledged that she had an obligation to recognize and protect state secrets on the basis of the sensitive nature of the information contained in them -- whether they bore classified warnings or markings or not.

State secrets are materials that, if revealed, could harm the national security of the United States.

His example is not even remotely analogous to Mrs. Clinton's behavior while secretary of state.

Why did he address this last Saturday?

He probably did so for two reasons. The first is that people in Hillary Clinton's inner circle from her time as secretary of state have been offered interviews by the FBI. They all hired the same lawyer, and with that lawyer, they are in the process of answering FBI questions. Bill Clinton -- for whom the FBI once worked -- knows that the investigation will soon be at his wife's doorstep, and he wanted to get her version out to Democratic primary voters.

The second reason for Mr. Clinton's broadside relates to an obscure but profound admission by the Department of Justice. Here is the back story.

One of the 39 Freedom of Information Act lawsuits brought in connection with Mrs. Clinton's email scandal was filed recently by Jason Leopold, a reporter for Vice News. He seeks copies of the emails Clinton tried unsuccessfully to wipe clean from her server, as well as copies of communications between the DOJ and Mrs. Clinton.

The DOJ moved to dismiss his lawsuit, and in support of its motion, it filed a secret affidavit with the court, signed by an FBI agent familiar with the bureau's investigation of Mrs. Clinton. In its brief filed the day before Mr. Clinton made his silly speeding prosecution analogy, the DOJ -- which also once worked for him -- characterized the secret affidavit as a summary of the investigation of Mrs. Clinton. The DOJ argued that compliance with Leopold's FOIA request would jeopardize that investigation by exposing parts of it prematurely.

In the same brief, the DOJ referred to the investigation of Mrs. Clinton as a law enforcement proceeding.

That was the first public acknowledgment by the DOJ that it is investigating criminal behavior -- a law enforcement proceeding -- and it directly contradicts Mrs. Clinton's oft-repeated assertions that the FBI investigation is merely a routine review of the State Department's classification procedures.

Many in the legal and intelligence communities have discounted her assertions because reviewing classification procedures of the State Department is not a function of the FBI, but now we have the government's own words that its investigation of Mrs. Clinton's email handling is one implicating law enforcement. Since that late Friday filing, Mrs. Clinton has ceased referring publicly to the FBI probe as an evaluation of the State Department's security procedures.

Perhaps she should tell her husband what was on that server before she tries to use him as a not-so-secret weapon.

Perhaps she now recognizes how hard-pressed she will be to claim to the FBI or to a jury that she did not know that satellite photos of a North Korean nuclear facility or transcripts from wiretaps of Yemeni intelligence agents' cellphone calls or the itinerary of the late U.S. Ambassador to Libya Chris Stevens in the days before his murder or true names of American undercover intelligence agents -- all of which were in her emails -- were state secrets.

Perhaps she knows now that this is not a game.