Will the Anarchist Violence in Our Cities Turn Women Into Trump Voters?

Joy Overbeck
|
Posted: Aug 20, 2020 12:01 AM
Share   Tweet
The opinions expressed by columnists are their own and do not necessarily represent the views of Townhall.com. 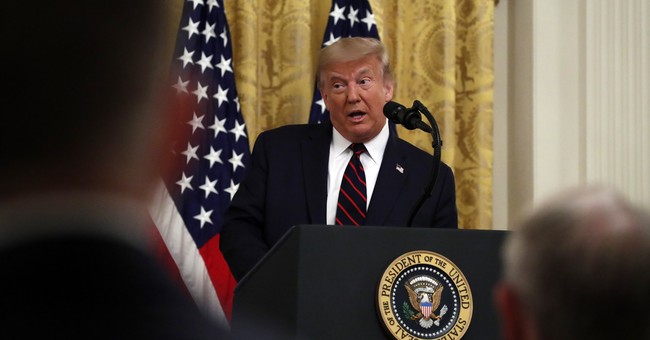 When Michelle Obama warned in her Democrat Convention speech, “we’ve got to vote for Joe Biden like our lives depend on it” she may have unwittingly been sounding an alarm to moms across the nation in ways she didn’t intend. Those moms could have heard on the national news the terrified 911 call of Tara Durant whose car was trapped in a mob of rampaging Black Lives Matter protestors in Fredericksburg, Virginia.

Unable to get away, Durant calls 911 and is told by the dispatcher that the police can’t do anything about her plight because the protests have been “sanctioned by the city.” Becoming frantic and with her 12-year-old daughter in the car, Durant is incredulous as the dispatcher calmly advises her to complain to City Hall. When the increasingly panicked mom says the mob is blocking her from going forward, the 911 operator responds, “Yeah, they’re allowed to do that per City Hall.” Finally, as protestors climb on her car, Durant is heard screaming and sobbing, “Get out of the way! They’re on my car! And I’ve got a little girl in the car crying! Are you kidding me? This is insane!” Finally, she can go forward and escape.

Every mother who heard that audio tape could see herself trapped in that car with her kids crying in the back seat as “peaceful protestors” banged on the windows. Especially suburban women famously appalled byDonald J. Trump. They find him crude, rude, and just plain “unpresidential” whatever that is. And offensively orange of course.

Sometimes known as soccer moms, and as security moms after 911, they may be finding that inner grizzly mom that Sarah Palin called forth. As marauding tribes of Visigoths careen through major American cities, looting and pillaging, tearing down statues, beating people bloody, and destroying the livelihoods of citizens of all colors, disbelief and horror mingle with the questions surfacing in the female mind:

-How did legitimate anger against the murder of George Floyd so quickly morph into weeks of vicious, America-hating, cop-loathing destruction?

-Why are the elected Democrat leaders in the cities and states they have run for decades not condemning these dangerous domestic terrorists?

-Why do these same Democrat officials repeatedly order police to stand down as rioters tear apart stores and government buildings, attacking police with fireworks, frozen water bottles, bricks, and other weapons?

-Why do the rioters who say they’re FOR black lives, demolish black businesses?

-When is this crazy-scary rage coming to my neighborhood?

Even as Congressman Jerry Nadler assured a reporter than the violence is a “myth” and Nancy Pelosi shrugged off the toppling of her hometown’s Christopher Columbus statue as “people will do what they do” – bizarrely reminiscent of Ilhan Omar’s description of the 9/11 attack as “some people did something” - anyone with a television, a radio, a phone, or a computer can see the manic insurrectionists are bent on toppling the America that normal Americans know and love.

Moms with “Black Lives Matter” signs on their upscale suburban lawns who may have marched in early protests against police in the aftermath of Floyd’s killing, could be experiencing a think-again moment. Standing for good cops and against bad cops, as do we all, is an entirely different thing than supporting the radicals’ rallying cry for no cops. Anarchists brandishing “Kill the Cops” and “The Only Good Cop is a Dead Cop” posters do not express the sentiments of suburbanites on board with social justice.

As over 90 days of burning, beatings, and destruction unfold in Portland, murder and mayhem is soaring there and in Chicago, New York, Minneapolis, and other cities where Democrat leaders are firing police officers and defunding law enforcement under the orders of the anarchist Left, Antifa, and militant America-haters.

The Trump campaign’s commercial about 911 calls going unheeded because of police  defunding  (“press 1 to report a rape, press 2 for a murder, 3 for home invasion ….current wait time is five days," which was slammed by Democrats as pure fear-mongering has become a frightening reality. In Portland on the night of 8/16 over 60 emergency 911 calls actually went unanswered while police were busy with hundreds of militants pelting them with rocks, bottles and fireworks on the 80th consecutive night of riots.

The emergency calls being ignored were from citizens victimized by burglars, vandals, hit and run drivers, and more. Though over 500 people have been arrested, fewer than 50 are being prosecuted according to The Associated Press. Lawlessness is allowed to rampage largely unchecked by the law.

While some polls show Trump still far behind Biden with women, there are other signs that signal a possible shift. Rasmussen’s August 6 survey found that 66% of likely voters “believe Trump identifies more with the police in violent protest situations” and 60% think “most national Democrat leaders like House Speaker Nancy identify more with the protestors…”Surprisingly, even more black voters – 76% -- are convinced the president identifies more with the police. Nationwide, 66% of Americans “oppose reducing the police budget in the community where they live and 61% believe violent crime will go up in communities that defund police.So, it’s logical to assume that the majority are with Trump on the law-and-order issue. In addition, the very black people who are supposedly most targeted by the police are the most vocal in wanting their protection. Not good news for the anarchists.

A recent Gallup poll confirms that most black people want no part of the Black Lives Matter de-policing crusade. Surveying more than 36,000 adults, the report found fully 81% of black Americans said they’d like police to spend the same amount of time in their community as currently, or even more police spending more time.

One indication of the spreading fear is booming firearms sales among women as Antifa, BLM, and other insurrectionists are increasing their demands. Some are now insisting white people give them their homes by way of “reparations.” Marchers on August 12 reportedly ranted at homeowners in a gentrified Seattle neighborhood, “Get out of our neighborhood! Pay the fee! Open your purse!”  One activist shouted at homeowners, “Give people back their homes…I used to live in this neighborhood and my family was pushed out and you’re sitting up there having a good time with your other white friends!”

The St. Louis couple who stood on their front lawn with their firearms to defend their home from threatened invasion did what other homeowners could be facing soon. The anarchists may be overplaying their “white guilt” card as suburban women and urban women, whether black or white, become fully woke to the very real threat to their children and their families.By election day they may well agree with Trump’s 911 ad: “You won’t be safe in Joe Biden’s America.”

Joy Overbeck is a Colorado-based journalist who has written for Townhall, The Washington Times, American Thinker, The Federalist, The Daily Caller, and others. Twitter: @joyoverbeck1.