Half of Americans Live in Fear – They’re Called Men

Joy Overbeck
|
Posted: Sep 24, 2018 12:01 AM
Share   Tweet
The opinions expressed by columnists are their own and do not necessarily represent the views of Townhall.com. 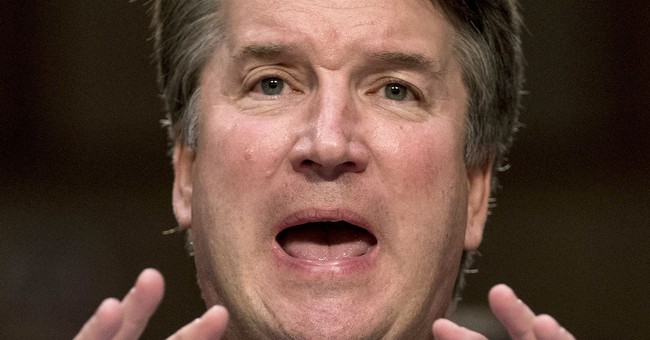 If this outrageous 36-year-old claim by a leftist, anti-Trump marching, California psychology professor against Judge Kavanaugh is treated like truth, the p*ssy hat posse will begin a reign of terror that will destroy the careers, families, and futures of many innocent men. No male will be safe if this travesty is allowed to stand.  All the usual restraints of the rule of law that protect the accused will be trampled by #metoo mob rule – the Furies will run wild.

Equally terrible, the claims of women who have actually been raped and abused will be forever stained because the Democrats are using Ford’s story as a bludgeon to beat a good man off the Supreme Court bench. We will be back to where we were when women’s legitimate abuse accounts were likely to be disbelieved. And moving into a bizarre arena where every man will need a chaperone along to protect his honor should he dare to attempt actually dating a woman.

We all know the headline cases of illegitimate accusations: the hapless Duke Lacrosse Team, Mattress Girl at Columbia University, the brutal, sensational yet wholly fictional story of gang rape in Rolling Stone Magazine. But many of us have personally known incidents where women have falsely accused men of physical abuse or sexual abuse, or even sexual abuse of their own children in order to exact personal revenge on a boyfriend or ex-husband or to deny a father custody or visitation. It’s happened for years. But this life-wrecking male targeting is absolutely certain to accelerate to alarming proportions under the golden halo of “all women must be believed.”

No, they must not. Women are not always blameless flowers and men are not always violent scum. In the case of Judge Kavanaugh, an obviously thin, groundless accusation with no proof whatsoever seems all that’s needed to destroy an exemplary man’s character and reputation.

We are expected to ignore the sincere testimony of over 60 women who knew Kavanaugh in his high school years and beyond, and wrote letters speaking to his great regard and respect for girls and women. We are expected to ignore that three out of three of the other teens Ford claims were at the party (Leland I. Keyser, Patrick J. Smyth and Mark Judge) either deny attending any such party, and/or say that nothing like what Ford describes ever occurred. On Sept. 22 Keyser’s lawyer, Howard Walsh, released a statement to CNN and the Senate Judiciary Committee. "Simply put," Walsh said, "Ms. Keyser (a lifelong good friend of Ford’s) does not know Mr. Kavanaugh and she has no recollection of ever being at a party or gathering where he was present, with, or without, Dr. Ford."

Instead, we are to believe Christine Blasey Ford, who doesn’t even know the basic essentials of what she says happened to her. She isn’t sure just when or even where the alleged attack took place. She doesn’t know how she got home. She doesn’t know if there were four high school boys present, or maybe Kavanaugh and just one more, his friend Mark Judge, who denies ever being there.

No matter. As soon as the Democrats leaked word of the Ford letter, grimly serious Democrat Senators and Hollywood actresses marched up to microphones to role-play as outraged surrogates for the “victim.”

Now some Democratic senators are calling Ford a “survivor.” But of what? In the craziness that has ensued, Ford’s complaint has inflated like a Thanksgiving Day parade balloon. A “Democrat consultant” claimed recently on Fox’s Tucker Carlson Show that Ford was raped, giving the host occasion to quickly correct her. She then quickly and a bit sheepishly conceded the point.

What really happened? Even by Ford’s account, it’s hard to tell. She told the Washington Post in an article published Sept. 16 that Mark Judge and Kavanaugh were “stumbling drunk” and the latter “was trying to attack me and remove my clothing” during the party 36 years ago. He was unsuccessful -- she kept her clothes on. But in notes made by her therapist during a 2013 therapy session without her husband, Ford “described a rape attempt in her late teens.”

Maybe Ms. Ford is conflating the two incidents since about the only dependable consistency in her story is that she was 15, not in her late teens, when Kavanaugh supposedly tried to attack her.

Also suspect is Ford’s claim that she wanted to remain anonymous when she sent her July letter to Senator Dianne Feinstein naming Kavanaugh as her attacker. Oh, and she just happened to take a lie detector test (which is never admissible in court because of its unreliability). She and Feinstein knew the letter would have zero credibility unless the “victim” was willing to reveal herself. In order to use Ford as a lethal, last-minute neutron bomb to detonate Kavanaugh’s nomination after all else in the Dems dirty tricks arsenal had failed to annihilate him, the accuser needed to come out, so come out she did. This is a disgrace falling squarely on the desperate Senate Democrats who had days of hearings to address this.

And now Ford is making absurd demands of the Senate Judiciary Committee as conditions for her appearance, like the Rolling Stones on tour demanding an all-you-can-eat sushi buffet. Christine Ford may appear next Thursday as tentatively scheduled or she may not. If she does, we can be certain of only one thing: she will cry. And the Democrats will accuse Republicans of a cruel lack of basic humanity if they don’t squeeze out a few sympathetic tears too.

Clearly this is a transparent, final-hour ploy by the Democrats intended to destroy Judge Kavanaugh’s nomination to the Supreme Court. Make no mistake; if they are triumphant they will be energized to deploy exactly the same reprehensible tactics to take down President Trump’s next nominee. And the next.

Meanwhile, the Senate Judiciary Committee Republicans and their leader, Senator Grassley, debase themselves with their fawning allegiance to the “old white men” slander from the pussy hat mob. Hey Senators, you and your colleagues are duly elected representatives of We the People – man up and act like it. Confirm Judge Kavanaugh now.

Joy Overbeck is a Colorado journalist, author and Townhall columnist who has also contributed to The Washington Times, The Daily Caller, American Thinker, BarbWire and elsewhere. More columns: https://www.facebook.com/JoyOverbeckColumnist  Follow her on Twitter @JoyOverbeck1