Joy Overbeck
|
Posted: Sep 11, 2018 12:01 AM
Share   Tweet
The opinions expressed by columnists are their own and do not necessarily represent the views of Townhall.com. 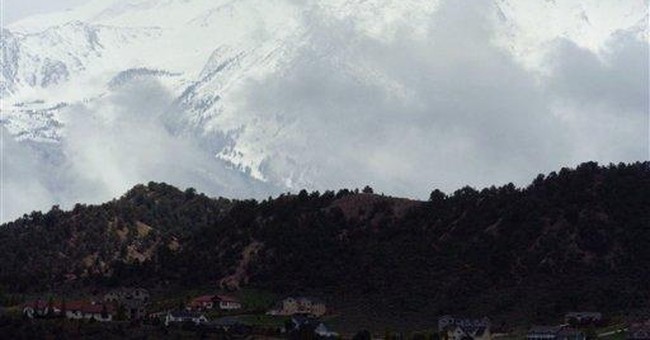 Polis would re-impose Obama-esque state government-controlled healthcare that has pounded family budgets with hundreds of dollars in monthly premiums for insurance they can’t even use because deductibles are so high. In Congress, Polis has introduced repeal of the Trump tax cuts that would steal thousands of dollars Colorado families are saving because of the new law, and cost the Colorado state budget hundreds of millions as well. Like Obama and Clinton, Polis would start banning oil, gas, and coal, destroying an industry that contributes over $30 billion to Colorado’s economy and over 200,000 well-paid jobs.

If the Colorado legislature didn’t go along with Polis’ radical plans, the new governor could use the lessons learned by looking over Obama’s shoulder as he used his pen and his phone to grab unconstitutional power to work his lawless will on the nation. Polis knows even if his edicts landed in the courts, as have Obama’s, it would be years before his illegal actions were reversed. By that time, he would have fundamentally transformed an exuberant, vibrant, Colorado that doesn’t need transforming into an over-taxed, over-regulated, energy-drained California East.

Just as President Trump’s tax cut law is getting Coloradans out from under the crushing burden of high Obamacare premiums and astronomical deductibles, incredibly enough Jared Polis says his socialized medicine plan will “lower costs.” Polis always has an angle, and it’s always about him, not the citizens. Months before he voted for Obamacare (hilariously titled the Affordable Care Act) in 2009, Polis had shrewdly invested multi-millions in a business that would profit from American companies that couldn’t afford to insure their employees under the expensive new law.

Polis knew the disaster of one-size-fits-all government-dictated healthcare would drive American companies to send employees to foreign countries for surgeries that would become too costly here under the new rules. So he took steps to profit from our pain by pouring between $7 million and $35 million in seven separate transactions into a “medical tourism” company, BridgeHealth International that facilitates medical travel overseas for less-expensive procedures.

Best-selling author Peter Schweitzer in Throw Them All Out, his 2011 book detailing the insider trading and conflicts of interest in Congress, called Polis’ investments “[o]ne of the more creative and cynical plays on health care reform.”

Renamed BridgeHealth Medical, in 2010 the company figured out domestic medical tourism was more lucrative than international trips. It negotiates rates with hospitals around the county for cheaper surgeries and charges businesses a 15% fee to send their employees traveling often 1,000 miles or more to the operating rooms offering the best deal.

Stunningly, the company Polis co-founded is based on the concept that competition is what begets lower healthcare costs. But at the same time he wants to deny Coloradans healthcare choice and the advantage of competitive rates and impose government socialized medicine with its inevitable rationing and higher rates. Of course Polis gets his own gold-plated insurance as a member of Congress so he doesn’t have to worry about us little people or the fact that just since 2014, the AFA has increased individual insurance prices in Colorado by 76 percent.

Polis wants to end the Trump tax cuts for Coloradans but dodges taxes himself.

Jared Polis is the second-richest man in Congress, worth an estimated $313,556,221according to Open Secrets. Apparently he never heard Barack Obama’s admonition that “sometimes you’ve made enough money.”

Polis admitted in a recent interview that he paid no federal income tax from 2001 to 2005 before becoming a congressman in 2009. He told a local Channel 9 reporter that he didn’t pay taxes because he didn’t make any money in those years.

Local CBS reporter Shaun Boyd asked: "For five years though, before you entered Congress, you paid no federal income tax and have used onshore and offshore Cayman Island accounts to avoid paying taxes. Critics contend a repeal of that tax reform law would amount to a tax increase of thousands of dollars a year for the average family in Colorado. How do you square, you know, you not paying taxes with raising taxes on middle class families?"

Polis denied none of it. "Well first of all, I paid a heck of a lot of taxes in the years I made money," he replied. "When you don't make money, you can't pay taxes, and since I've been in public service my expenses have been greater than my income, and that's simply the fact, and I think that's, you know, that's completely appropriate." Polis started his “public service” as a member of the Colorado School Board in 2000, spending a million dollars to narrowly win his election.

In 2003 while he was consumed with attending once-a-month School Board meetings, Polis’ estimated net worth was $174 million, according to Fortune Magazine’s list of the richest people under 40. And during his five-year tax holiday Polis was somehow able to combine his public service with busily hauling in big moola from ProFlowers, his roaringly successful online flower shop.

In 2003, Polis took ProFlowers public, a move that means a big payday for the founder. Two years later he made $143 million on the $477 million sale of ProFlowers parent company, Provide Commerce. During the same period, the future congressman was a client of an investment firm that included a tax-free account in the Cayman Islands, the Caribbean version of Switzerland. Does it make sense the man had no taxable income from 2001 to 2005? Let’s connect those dots, Colorado.

Polis’ dislike for taxes unless somebody else is paying them took center stage recently when he introduced a repeal of the Trump tax cuts that have boosted incomes of Colorado families and businesses. His bill is called “Students Over Special Interests Act”-- bet you didn’t know you were “special interests,” Coloradans. Polis’ measure would raise the average Colorado family’s tax bill by $2,000 or more in order to use your money to pay off student college loans.

Ending the tax cuts would also rob Colorado of the $300 million that finance officials say the state stands to gain. The legislature could use these funds for education, overdue road and bridge repairs, or other urgent needs.

But Polis, like the astute businessman he is, has decided that buying young peoples’ mostly unaffiliated votes with a loan-forgiveness bonanza is more important than helping Colorado families.

The wanna-be governor even has his own Russian connection: when he was only 17 he spent a summer trading commodities on the floor of the Russian stock exchange.

Polis, like Obama and Clinton, would raise energy bills by destroying oil, gas and coal.

Colorado has been enjoying a huge boom in natural gas through modern fracking methods that are closely regulated for safety by numerous state agencies. Oil and gas contribute more than $30 billion and over 200,000 jobs to Colorado’s prosperity. According to The University of Colorado Leeds School of Business, in 2014 alone the industry’s tax and other payments to federal, state and local governments totaled $1.2 billion, helping to pay for essentials like Colorado schools, roads and bridges.

Polis wants to change all that by vowing to replace all fossil fuel energy with “green” alternatives by 2040.

Polis didn’t seem to care much about fracking until an oil derrick appeared across the street from his vacation home near Longmont. Then his opposition became a political vendetta of personal NIMBYism as he launched a series of Front Range town and city referendums to ban drilling or hinder exploration in other ways.

Although in his campaign commercials Polis boasts about all the jobs he’s created as an entrepreneur, he thinks nothing of throwing more than 200,000 energy field workers out of their high-paying jobs and depriving their families of an excellent income. Not to worry, Polis has big plans to “retrain” these workers for construction jobs, insulating homes and the like, similar to the wonderful new careers that Hillary planned to force on the coal workers whose jobs she would eliminate.

Polis’ all-green goal would also drastically raise the energy bills of the poorest Coloradans; those who can least afford higher prices for this necessity.

Jared Polis, like the typical liberal/leftist/socialist, thinks he’s better qualified than you are to take over your healthcare decisions, tax and spend your money, and even decide your career. If you want to keep your life your own, keep Jared Polis out of the governor’s office.