Joy Overbeck
|
Posted: Sep 24, 2016 12:01 AM
Share   Tweet
The opinions expressed by columnists are their own and do not necessarily represent the views of Townhall.com. 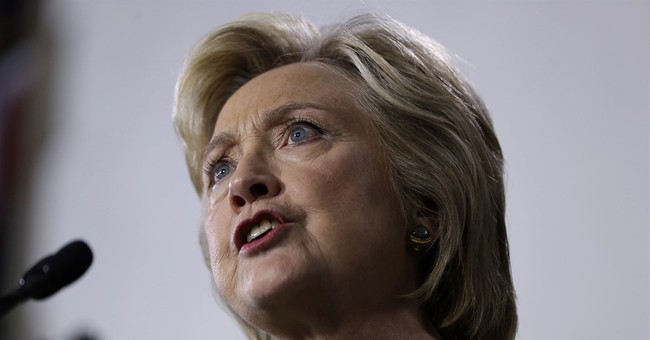 Hillary Clinton as secretary of state approved of selling  $316 billion of our most powerful American weapons and war planes to foreign countries, many of which throw homosexuals off buildings, murder their political enemies, force women to live in black cocoons, don’t let them drive or attend school, and fund terrorism against us and Israel.  In turn, these dozens of foreign nations and the American weapons manufacturers forked over tens of millions of dollars to the Clinton-controlled slush fund called the Clinton Foundation.

The most stunning example uncovered in a 2015 International Business Times (IBT) investigative article : a sweet deal cut by Clinton along with a group of American defense contractors led by Boeing to sell $29 billion worth of advanced fighter jets to Saudi Arabia.

Israeli officials told the Obama administration the Saudis’ new air dominance would disrupt the area’s balance of power. They were ignored. Still, it was a mystery why the Clinton-led State Department, repeatedly voicing disapproval of the Muslim kingdom’s anti-woman, anti-gay, anti-human rights policies, would approve the deal.

It was a mystery unless you knew that the Saudis contributed at least $10 million to the Clinton Foundation before Mrs. C became secretary. And unless you knew that Boeing had tossed $900,000 into the Foundation coffers weeks before the deal was finalized. No wonder, as Assistant Secretary of State Andrew Shapiro declared at a press conference announcing the approval, the deal had been “a top priority” for Clinton personally.

IBT’s research, based on government and Clinton Foundation records (also cited by the Huffington Post, The Hill, and elsewhere) uncovered that Clinton’s State Department okayed $165 billion worth of advanced arms sales to 20 nations whose governments gave millions to Clinton’s foundation, and approved another $151 billion of Pentagon-brokered deals to 16 more countries that also gave big bucks to the CF.

In a world where the Justice Department and the FBI enforce the law, this would be massively unheard-of  pay-to-play. After all, under federal law foreign governments seeking State Department approval to buy American-made arms are forbidden to make campaign contributions in order to guard against foreign states influencing U.S. policy. But no worries – the Clinton Foundation calls itself a charity, even though the bulk of its expenditures pay for the Clintons and their pals to fly around the world, canoodling with greedy dictators with oil and minerals to sell to those same Clinton pals. Due to the Foundation’s notoriously anything-goes “bookkeeping,” it’s impossible to know if any of the billions donated financed Hillary’s campaign.

In fact, Hillary’s arms-for-Clinton cash deals employ a level of Influence peddling so big and bold and dangerous that if not officially illegal, they come within a ferret’s whisker of lawlessness. If only we still lived in a nation where the laws against such crass, in-your-face corruption are enforced – are you listening, FBI Director Comey?

Presidential wanna-be Clinton has no problem equipping the worst dictators and terror enablers in the world with the powerful American-made military might to further repress, subjugate and even murder their own people. Some of the tyrants she’s armed to their teeth are the regimes of Saudi Arabia, Kuwait, Algeria, The United Arab Emirates, Oman and Qatar. All donated to the Clinton Foundation and all got approval from the Clinton-led State Department to buy shiploads of our most sophisticated weaponry.

Yes, the very same Hillary Clinton who assures us ad nauseam that her entire life’s work has been consumed with making life better for oppressed peoples.  When those oppressed peoples demonstrate in the streets for liberty and the right to drive cars, the government troops firing on them will very likely be using American weapons conveniently supplied by Hillary Clinton and her State Department.

Hillary’s enthusiasm for selling dangerous weapons to the enemies of freedom as long as they pour money into the Clinton Foundation endangers Americans too, according to her own words. In a 2009 State Department cable revealed by Wikileaks, Clinton complained of “an ongoing challenge to persuade Saudi officials to treat terrorist financing emanating from Saudi Arabia as a strategic priority.” In other words, her fabled “soft diplomacy” and personal charm didn’t deter the Saudi jihadist sympathizers from funding global terror.

Clinton also criticized the Kuwaiti government and UAE-based donors for continuing to provide funds to a number of terrorist groups. And yet she gave these terrorist-enabling nations and others her okay to buy the most advanced U.S. weaponry – as long as they gave millions to the Clinton Foundation.

How much? Hard to say since the Foundation regularly fails to report millions in foreign donations and is now re-filing its last five years of tax returns. However, according to the IBT article, “In all, governments and corporations involved in the arms deals approved by Clinton’s State Department have delivered between $54 million and $141 million to the Clinton Foundation as well as hundreds of thousands of dollars in payments to the Clinton family, according to foundation and State Department records.” In explaining why we can’t know just how many millions the Clintons banked, IBT reporters David Sirota and Andrew Perez add ironically, “The Clinton Foundation publishes only a rough range of individual contributors’ donations, making a more precise accounting impossible.”

Even the leftist Huffington Post was aghast at the blatant hypocrisy of Hillary’s proliferation of arms sales abroad contrasted with her fierce support for arms control on U.S. soil. Noted the article, “While touting her gun control record and lambasting (then rival) Bernie Sanders’ firearm policy, Hillary Clinton keeps under wraps her heavy-handed involvement in the arms trade during her time as America’s top diplomat.”

Of course accusations of hypocrisy and corruption bounce right off Hillary supporters’ wall of denial.  But anybody with two brain cells to rub together doesn’t need any more proof of quid pro quo than the fact, also reported by IBT, that in the same time period when the Clinton-headed State Department approved an 80 percent increase in arms sales to all countries, the nations that donated to the Clinton Foundation reaped a hefty 143 percent increase from Hillary’s benevolence.

She likes to accuse Donald Trump of recklessness – just what Director Comey called her, though it didn’t stick. But what could be more reckless than showering the world’s most dangerous, volatile region with billions worth of the world’s most lethal weapons? Is ‘foreign affairs expert” Hillary totally unaware of how the Sunni and the Shiite Muslims have slaughtered each through the centuries, continuing today? And what of Israel – why would we equip our ally’s powerful enemies with the American-made muscle to make good their threats to smash the tiny democracy into dust?

Mrs. Clinton has armed evil actors regardless of the deadly consequences, to us and to their own repressed citizens. And she’s done it for money – for the Clinton’s “legacy” project.

Even someone who has known her well for years, former Secretary of State Colin Powell, knows she shouldn’t be president. “I would rather not have to vote for her, although she is a friend I respect,” wrote Powell to a Democrat donor. “A 70-year person with…unbridled ambition, greedy, not transformational… everything HRC touches she kind of screws up with hubris.”

Yes she kind of does. Don’t let her screw up our nation. Vote for the transformational Donald J. Trump.