Joy Overbeck
|
Posted: Jan 22, 2016 12:01 AM
Share   Tweet
The opinions expressed by columnists are their own and do not necessarily represent the views of Townhall.com. 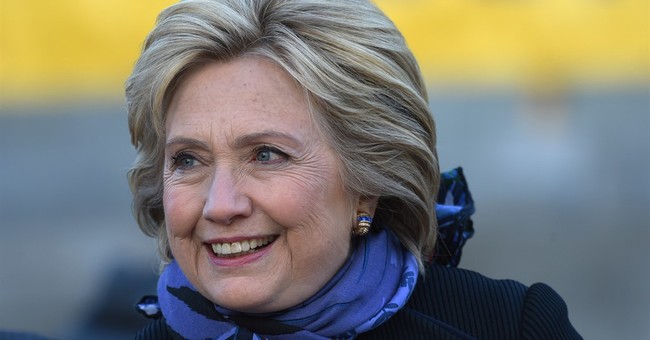 In the last moments of this incandescently tragic but brilliant film, the camera lingers on an American flag, torn and blackened by fire, weighed down by chunks of the once-lavish consulate, sinking in the trash-strewn pool of the Benghazi residence where just a few hours earlier Ambassador Chris Stevens was dipping his toes.

A gut-rending symbol of how our rodent-hearted “leaders” have sunk our once-great nation; the noble flag drowned literally in the rocket’s red glare of Islamic terrorist bombs bursting in air.

Thirteen Hours: the Secret Soldiers of Benghazi is a war movie about the Libyan terrorist attacks on September 11, 2012 that will take its place among the iconic war movies of all time.

I sat open-mouthed, clutching the arms of my seat and spilling my popcorn as the screen illuminated in  flashes from massive explosions the breath-taking heroism of the former Marines and Navy Seals defending the U.S. Benghazi assets. Their names are Tanto (Kris Paronto), Oz (Mark Geist), Tig (John Tiegen), Rone (Tyrone Woods) and Glen Doherty.

The film also illuminates with night vision goggle precision the treachery of Hillary Clinton and Barack Obama who did nothing to save them. Never are the secretary of state or the commander in chief (uh, Obama) even mentioned, which in itself screams volumes. Just as they were absent from duty the night of the attacks, they are AWOL in the movie itself.

We now know that Hillary Clinton spent a little time in the Situation Room that night, presumably watching the live feed from the drone that captured the life-and-death siege of first the ambassador’s residence and a few hours later, the second attack on the CIA annex a mile or so away. We know that the president wasn’t there, likely busy picking out the suit he would wear for his campaign fund-raiser in Nevada next day.

We know now that the night of September 11 Secretary of State Clinton told her daughter and the Egyptian prime minister that this was a coordinated planned attack by Islamic terrorists marking the September 11 anniversary and had nothing to do with any video. So we know that she and Mr. Obama deliberately lied when they told the grieving relatives as their loved ones’ flag-draped coffins were being unloaded on the tarmac that a video was to blame for their deaths. We know that the security for which Ambassador Chris Stevens repeatedly begged was denied, and actually down-scaled in one of the world’s most dangerous posts that most nations’ embassies and even the Red Cross had already fled.

As they saw the consulate burning in the distance, the small former special forces team assigned to protect the CIA Annex (purportedly to secure weapons from the deposed Quadaffi regime) disobeyed several stand-down orders from the on-scene CIA station chief and ran to help. They said in the film and later in TV interviews (on Fox News; the mainstream media won’t touch this) that if the CIA bureaucrat would not have delayed their leaving, they are sure they could have saved two lives. But despite furious attacks, they did succeed in rescuing  many at the consulate.

After the embassy was demolished and Sean Smith and Ambassador Stevens were dead, the five-man team returned to combat positions on the roofs of the CIA buildings, defending the 25 or so CIA personnel inside against the fierce onslaught of incoming rocket propelled grenades and mortar fire from the Islamic terrorists.

In one scene, Rone (Tyrone Wood)  face bloodied and streaked black with machine gun soot, climbs down to the office complex and asks one of the CIA operatives if there’s anyone she can call to get some air support – not bombs, but just a low fly-over “to put the fear of God and the USA into them.” She says she has some contacts and gets on the phone.

In fact, according to a CBS news report by investigative reporter Sharyl Attkisson:

“The Pentagon says it did move a team of special operators from central Europe to the large Naval Air Station in Sigonella, Italy, but gave no other details. Sigonella is just an hour's flight from Libya. Other nearby bases include Aviano and Souda Bay. Military sources tell CBS News that resources at the three bases include fighter jets and Specter AC-130 gunships, which the sources say can be extremely effective in flying in and buzzing a crowd to disperse it.”

So a fear-of-God airborne testosterone display could have been mounted yet for unknown reasons was not. The film has a short scene captioned “AFRICOM” showing a gaggle of military brass talking about a possible air mission, and then we briefly see rows of American soldiers sitting on airplane benches in full readiness combat gear. They never took off .

Not long after the debacle, then Secretary of Defense Leon Panetta told Pentagon reporters it wasn’t clear enough what was occurring on the ground in Benghazi to send help.

“(The) basic principle is that you don’t deploy forces into harm’s way without knowing what’s going on; without having some real-time information about what’s taking place,” Panetta told Pentagon reporters. “And as a result of not having that kind of information, the commander who was on the ground in that area, Gen. Ham (head of AFRICOM, the crisis-responding combat command for Libya and other African nations), Gen. Dempsey (chairman of the Joint Chiefs of Staff) and I felt very strongly that we could not put forces at risk in that situation.”

So the on-site drone giving them real-time eyes-on plus the Benghazi CIA calling desperately for help with the deafening soundtrack of bombs and machine gun fire in the background simply didn’t provide enough info about what was going on? These men are in charge of the “no man left behind” ethic of the U.S. armed services. Panetta’s excuse is simply preposterous. .

Panetta also serves up a banquet of red herring by claiming those pinned down in Benghazi demanded a rescue force. They would be grateful for a bone-rattling, cockroach-scattering fly-by. But even that was too much for the Defense Secretary.

Later in the battle, Rone Woods returns to the CIA office complex to ask the woman who called her contacts for help if she’d had any response.  Negative. Nobody would be coming.

That no-go decision had to be deliberate. AFRICOM’s General Ham told the House Armed Services Subcommittee on June 26, 2013, that he learned about the terrorist attack on the consulate only 15 minutes after it started. He headed down the hall to General Dempsey’s office and informed him about the onslaught. The two immediately went to meet with Panetta and the three “headed across for the meeting at the White House” according to Ham.

Their meeting with the president started at 5:00, about an hour and 18 minutes into the terrorist siege so the president knew about the attack at that time. The meeting lasted a mere half hour. Now things get blurry. According to then White House press secretary Jay Carney, Obama didn’t phone Clinton until 10 p.m. that night, more than six hours after the attack began. But Carney’s statement didn’t line up with a letter released by the White House to Congress stating that Obama made no phone calls the night of the attack. And it turns out a month earlier Clinton had testified before the Senate Foreign Relations Committee that she learned of the attack on Benghazi at 4 p.m., not 10:00.

Clinton told the Senators that “we were in continuous meetings and conversations, both within the department, with our team in Tripoli, with the interagency and internationally. ..I spoke with President Obama later in the evening to, you know, bring him up to date, to hear his perspective,” she testified.

Internet sources including The Gateway Pundit and RedState have reported that both General Hamm and Rear Admiral Charles M. Gaouette, who commanded the Carrier Strike Group Three (CSG-3), then deployed in Middle Eastern waters during the attack on Benghazi, disobeyed stand-down orders from higher up and readied rescue plans.  These stories are supported by the president suddenly removing Ham from duty (firing) just about a month after Benghazi, followed by Ham’s premature retirement.

Also in October 2012 after the Benghazi disaster, Admiral Gaouette was fired as the Navy announced it was “replacing the admiral in command of an aircraft carrier strike group in the Middle East, pending the outcome of an internal investigation into undisclosed allegations of inappropriate judgment.” Could Gaouette’s “inappropriate judgment” be choosing to do the honorable thing by rescuing the Benghazi warriors?

Back to the movie, the CIA roof and a hail of hell as ex-Navy Seal Glenn Doherty and Tyrone Woods die in a savage mortar attack. Finally the CIA survivors are saved, not by American military but by the Libyan Army’s phalanx of military trucks.

And now the woman who shrilled, “what difference does it make”, who lied to the parents of the dead, who abandoned our Americans in order to support the president’s faux hawkish re-election slogan, “G.M. is alive and Osama bin Laden is dead,” is running for president.  Memo to America: be sure you have your life insurance paid up if you think Hillary Clinton will “fight for you” as her good friend Ambassador Stevens believed.  And don’t you dare vote for her.