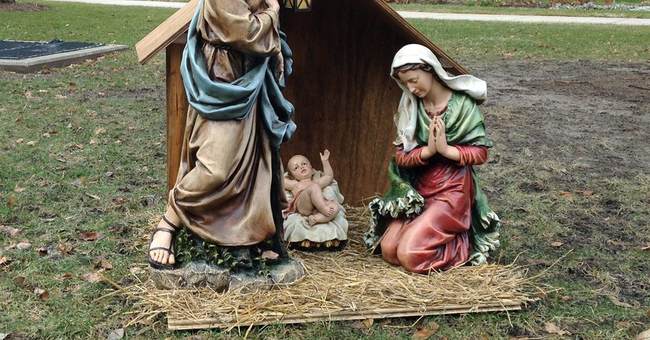 Once upon a time in a galaxy right here and now the Creator God who made it all decided that although his man children had become nasty pieces of work (consult your local headlines) He loved these fallen creatures enough to try and give them a last chance at the really good stuff called the afterlife (or heaven). So He sent His Son (who was also Him) down to Earth to give His life for them, and all they had to do was believe that the Father God loved them enough to do such an outrageous thing, and then they could spend eternity with Him.

Many took advantage of His generous offer and became happier than everybody else according to decades of Pew surveys. They were called Christians. But others scoffed and said they were far too brilliant to believe in some crazy god, even though they weren’t brilliant enough to figure out how the Universe came to be, or how the 36 chromosomes that define each unique human being replicate themselves in every single cell, or how their brains could make 100 trillion calculations per second. And they were called atheists, or agnostics, and they demanded proof.

And God puzzled, “How could these unbelievers demanding proof not notice that I put all this grass and the rain on the earth so the herbivores would have free food, and the carnivores would have free food in the form of the herbivores and that humans would have free food from both? Do these people think all that was an accident? And how about my creating the dinosaurs; granted, very entertaining for kids, but mainly so my humans would be able to fuel their civilization with oil and coal, making them prosperous and happy. How’s that for proof? Maybe they should use more than 5% of that big brain I gave them.”

But it came to pass that the atheists and agnostics just didn’t get it. And so while Christians are busy celebrating the miraculous birth of the Savior Jesus Christ and decorating trees and trying to find a large-person sweater for Aunt Agnes, the foolish atheists are putting up billboards scolding the rest of us for believing in God and the baby Jesus.

This year the American Atheists’ grinchy tradition of God-debunking billboards continues with a smiling Santa and the advice to skip church. News flash atheists: you are advertising St. Nicholas, aka Santa Clause, who happens to be a Christian saint.

But these God-bashers are so intellectually deficient that they don’t even realize that atheism itself violates the only commandment of their non-faith faith: “Thou shalt have no other gods but reason.” Since nobody can know for sure if there’s a God, to declare as a statement of fact that the deity is defunct is simply irrational. Not to mention preposterous.

But lo because the Lord knew that Man was a betting man since the Garden of Eden when he bet on an evil snake rather than his loving God, He created Blaise Pascal. Despite his stripper’s name, Pascal was a genius inventor, mathematician, philosopher, writer, and well-known 17th Century Jesus freak.

Using only about 5% of his intellect, he invented Pascal’s Wager which goes something like this: “If you believe in God and Heaven but in fact it turns out there is no God or Heaven and when you die you become a worm buffet; no harm, no foul. However, if you don’t believe in God or Heaven and there is in fact a God and a Heaven, you are eternally screwed.” Pascal was trying to help you atheists and agnostics understand there is no downside to believing in God. But it’s really inaccurate to call it a bet since believing is a no-lose proposition.

Plus according to many surveys through the decades, if you are a Christian it’s likely you will be happier and healthier than the unbeliever and you will even live longer. There is also the sad fact, concluded by a number of studies and published in the American Journal of Psychiatry, that atheists are far more likely to commit suicide than believers.

Atheists themselves admit this. Under the headline, Atheism Has a Suicide Problem, a God-denying blogger writes: “This is something we don’t like to admit, but it is true. There is a problem within the atheist community of depression and suicide. I know we would all like to believe that atheists are happier people than religious believers and in many ways we are. But we also have to accept the reality that in some very important ways we are not.”

Yeah, very important ways like the aforementioned health and happiness and not feeling empty and suicidal. But then the writer offers hope: in therapy. Yes. “Fortunately,” he says, “there are a lot of atheists who go into the field of psychology and psychiatry…don’t suffer quietly and alone.”

When not in therapy, atheists spend their days writing threatening letters to schools that include the merest whisper of Christ in their “holiday” pageants, urging the firing of Army chaplains who pray in the name of Jesus, suing for removal of memorial crosses honoring fallen heroes, and bringing court cases against football coaches who pray. They would have sued Thomas Jefferson for regularly attending church services held in the actual Congress building during his two terms as president; so much for separation of church and state.

Deep down, atheists know that God exists or they wouldn’t spend so much time and effort hating Him. In fact the commander-in-chief of American Atheists has a new book out, called “Fighting God.” Militant atheist squares off against the God he claims not to believe in.

Of course the problem with Pascal’s Wager is that even though Christianity is the best bet ever, believing is not something you can will yourself to do. Instead, you must open yourself up to the richness of the new life He offers through His Son.

Tens of thousands of fallen humans have found in a personal relationship with God saving grace from addictions like alcoholism and drugs, depression and despair and been converted to a new life in Jesus Christ. A transformed life is a powerful proof, fulfilling Jesus’ promise that, “I have come that they may have life, and that they may have it more abundantly.” (John 10:10.)

Einstein said, “I want to know God’s thoughts – the rest are mere details.” God’s thoughts are beautifully expressed in his autobiography, the Bible. Delve into it. Relationship with God is like any other relationship: the more time and effort you invest in knowing Him, the more He will reveal himself to you. You’ll find he’s full of wonderful surprises.

Jesus also promises peace, the mind and soul peace for which unbelievers yearn. “My peace I give to you; not as the world gives…Let not your heart be troubled, neither let it be afraid.” (John 14:27)

Take the bet. You can’t lose: greater health and happiness, and spiritual backup from the God who loves you and promises never to forsake you. Act now and He will throw in eternal life. And a Christmas that’s merry and bright.