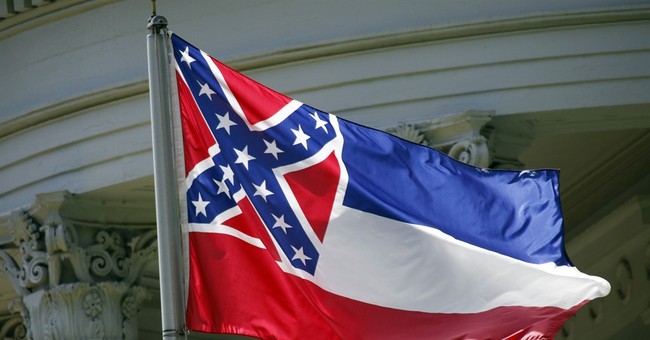 In late October, Ole Miss lowered Mississippi’s state flag following resolutions passed in both the student and faculty senates. The state flag is the last of its kind to prominently incorporate the Battle Flag of the army of Northern Virginia—known simply today as the Confederate Flag— in its design. The change signals a desire by the university to “fold it up and put it away,” a policy first enunciated by Robert E. Lee after the Civil War. Removing or changing the flag, however, angers many who view it as heritage rather than hate.

I empathize with this reaction, but ultimately I do not share it because the flag neither honors southern heritage nor contributes to the conservation of Mississippi’s social unity. Change in this instance is desirable because it exemplifies conservative philosophy rather than the progressive attitude – with which change is now inextricably associated. Change as a means for conservation is actually central in conservative thought, despite what the left would lead you to believe.

In 2008, Barack Obama commandeered the word “change.” Through the success of his campaign he made change a virtue in itself. All liberal policies suddenly became associated with “change,” resulting in a pernicious belief that conservatism is simply staunch resistance to any and all change. This is false, and liberal progressives have been pushing this idea since the early 20th century beginning with President Woodrow Wilson. He claimed that a conservative is simply “a man who just sits and thinks, mostly sits.”

Conservatives do enjoy “sitting.” But the reason why is because it allows careful deliberation. Once a change is considered and adopted, we tend to call it “reform.” Reform means the conservative has looked at the issue from every angle, deciding that change is preferable and necessary for conserving social unity while honoring precedents set by tradition. These are the conditions for conservative change.

“Change is essential to the [community]…just as it is essential to the human body…The conservative takes care that nothing in a society should ever be wholly old, and that nothing should ever be wholly new. This is the means of the conservation of a nation, quite as it is the means of conservation of a living organism. Just how much change a society requires, and what sort of change, depend upon the circumstances of an age and a nation.”

Since change is not antithetical to the conservative mind, then the task before conservatives is to consider whether changing Mississippi’s flag honors the circumstances of both the community at large and its traditions.

Changing the flag satisfies these conditions, especially as it honors the southern tradition of reconciliation. The reason why conservatives value the idea of tradition is because it empowers the most maligned class of all—the dead. English essayist G.K. Chesterton said it best when he wrote, “tradition means giving votes to the most obscure of all classes, our ancestors. It is the democracy of the dead. Tradition refuses to submit to the small and arrogant oligarchy of those who merely happen to be walking about.”

With an eye toward tradition, I think it’s important to consider Robert E. Lee, since he is frequently synonymous with the confederacy. Lee’s redemption emerges from the magnanimous manner in which he accepted defeat and sought reconciliation. “Fold it up and put it away” was Lee’s response to a woman who asked him what she should do with an old battle flag. It’s an account that corroborates Lee’s desire to lead his compatriots back into the Union after the Civil War. In another instance, Lee told a grieving widow, “madam, do not train up your children in hostility to the government of the United States. Remember, we are all one country now. Dismiss from your mind all sectional feeling, and bring them up to be Americans.”

Lee would tell us the same thing today. He would likely be stunned to see Confederate symbols flown in public spaces or incorporated in state flags loyal to the Union. Lee did not lament his service to the Confederacy, but he did accept its defeat as divine providence. In turn, he sought reconciliation with the Union through his leadership at what is appropriately named Washington and Lee University.

Mississippi’s flag will remain a contentious issue among conservatives, as many view this issue as nothing more than a continuation of the Left’s never-ending crusade for political correctness. The concern is legitimate—additional desires to uproot statues, silence dissent, and create a revisionist history are not conservative inclinations. Every piece of our tradition and community should require careful deliberation before reform is considered. Nothing should be wholly new.

Yet as conservatives, we cannot fall into the trap of accepting the dogma that all change is radical or politically correct change. There is indeed a right kind of change, and its purpose is conservative. It is organic, originating at the local level, cognizant of the traditions that shape community. Burke and Kirk understood this best—nothing should be wholly old, either.

I am not under the impression that students and faculty members at my alma mater removed the flag because they adhere to conservative orthodoxy. Rather, I see the development of this issue as functionally conservative. Removing or changing Mississippi’s flag through executive fiat would be a progressive strategy, which is not what happened at Ole Miss. Instead, elected representatives from the university body came together and recognized that the tradition of reconciliation is Mississippi’s true inheritance.

Voting to remove the flag was not only the right decision, it happened to be the conservative one as well.