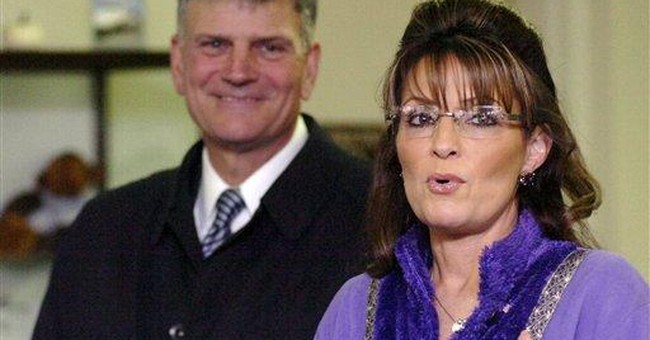 If indeed former Alaska Governor and Vice-presidential candidate Sarah Palin is the joke the new left claims her to be, one wonders why they don’t simply ignore her. On the contrary, they devote an unusual amount of energy into making her the butt of their jokes and seeking every opportunity to discredit her and cover her with political dirt. The Associated Press for example assigned 11 reporters to fact-check her new book “Going Rogue.” The AP assigned exactly 2 reporters to read through the more than 4 thousand pages of the Obama healthcare bills. So much attention seems to belie the New Lefts claims that Palin is a light-weight-- not worthy of our respect or attention.

Such a focus of energies seems a tacit acknowledgement that Palin and the principles she represents are a force to be reckoned with.

The primary knock against Palin is that she is dumb, or what is more politely called an anti-intellectual. Of course, the new liberal narrative views all conservatives as not only evil, but downright stupid – not ill informed or teachable, but simply intellectually inferior. From Carter to Obama the new left has consistently claimed a superior intellect.

I can’t help but smile when I recall a conversation I had with a professional friend during the early part of last year’s presidential campaign. She was excited about her opportunity to meet then candidate Barack Obama. “What do you like about the candidate?” I queried. “He is brilliant,” she responded. “He understands the issues so clearly.” Fair enough. But would she, I wondered, be as excited if the candidate were a Republican? “Suppose you were preparing to meet candidate Condoleezza Rice?” I asked. There was a pause and then she responded, “Well, she is very bright.”

Brilliant liberals and “bright” conservatives is the window through which leftists view the world because their vision of America is one that relies on appeals to authority and claims of moral and intellectual superiority. The administrative state posits that the cure for a world teeming with poverty and injustice is within our grasp. There exists a community of anointed intellectuals, trained in our finest universities that can solve all of society’s ills and bring our lives into moral order if only they had the power; if only the rest of us would conduct our lives as they wish.

Witness Democratic Party leader Howard Dean recently standing before a group of French journalists extolling the virtues of this president. According to Dean the battle between socialism and capitalism has been settled. (I will give you 3 guesses which side he believes won.) It is Dean’s belief that our current President and the party he represents understands that American benevolence demands socialist policy. The question therefore is no longer whether or not we will have socialism, but how much socialism we will have. Dean is proud of the Democrat party for its political clarity.

The problem for Dean and the rest of the new left is that Americans tend to have an independent streak that leads them to largely reject the idea of a centralized intelligentsia deciding how best they should live their lives. Palin represents the American individualist that says, “I know what is best for my family and what is in agreement with my faith. I would rather do things my way.” The administrative state is incompatible with such independence and can only thrive by stamping it out.

Palin and those that root for her may not have graduated from Harvard, but they are smart enough to know that Howard Dean is wrong and Ronald Reagan was correct when he said the question was one of moving “Up to man's age-old dream-the maximum of individual freedom consistent with order or down to the ant heap of totalitarianism.” We are indeed bright enough to know that just as there was no moral good in slavery, there is nothing benevolent about socialism. The barbed wire around socialist utopias is there to keep people in – to force them (in the name of liberty) to do what the intellectuals say to do.

It is not Palin’s grit, her good looks or her “you betcha” small town persona that drives the new left to distraction. Rather it is her elementary ability to recognize the danger in putting too much trust in the smart guys-- especially when their solutions require that we place our liberties at their disposal. “Palinism” is not a rejection of intellect; it is however, to say in no uncertain terms that some of us regular folk might just know a bit more about how to run our lives and this country than a room filled with Ivy educated czars.