Joseph Bilello
|
Posted: May 26, 2017 12:01 AM
Share   Tweet
The opinions expressed by columnists are their own and do not necessarily represent the views of Townhall.com. 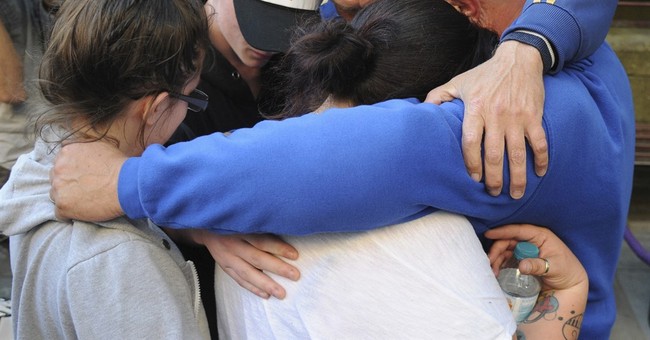 Perhaps the most egregious example of the insane and poisonous nature of political correctness is on display in the aftermath of nearly every radical Islamic terror attack that is carried out in the West. Many of our elected leaders, law enforcement and members of the media assure us that they will spare no effort in getting to the bottom of the motives behind the heinous attack…..after essentially ruling out the only motives for the attack.

The apparent European approach to dealing with the epidemic of radical Islamic terror is as follows:

Wait for a terror attack - condemn it with standard talking points - remind everyone how awesome most Muslims are and how there was no relationship between Islam and said attacks - express concerns over a potential backlash against Muslims (a backlash that never actually happens) – hold a candlelight vigil - do nothing of substance policywise to combat the threat - make arrangements to import more Muslim refugees - wait for another terror attack and repeat.

Critics of President Trump’s perceived lack of oratory skills might have preferred that he refer to the recent Manchester suicide bomber as, ‘a deranged lone wolf who perverts the teachings of the wise prophet Mohammed and the great religion of peace’, or something to that effect. But Mr. Trump preferred to go with, “evil losers.” “Evil losers in life” may not be the eloquent rhetoric some expect from a president but it is far more accurate and sincere than anything we have heard from any Western leader in a very long time.

The significance of rhetoric as it pertains to radical Islamic terror has been the topic of debate for quite some time. Often criticized for his reluctance to use the term “radical Islam,” President Obama once said that there was “no magic in the phrase radical Islam” adding, “it is a political talking point.” Mr. Obama had a point. Words without action are essentially useless. But critics of the former president believed that at least naming the enemy was a step in the right direction. How can you fight an enemy you can’t even name?

Talk is cheap. The rhetoric that comes from leaders on the American left and the bulk of Europe may mean little in the actual war on terror. But it gives us a look into the mentality that shapes the policy of these nations. And that is more than just words. If they can’t understand the enemy, how they can effectively fight them?

British Prime Minister Theresa May condemned the “cowardice” of the Manchester bomber in a statement following Monday night’s attack. In the wake of nearly every Islamic terror attack, politicians, journalists and pundits look for every reason to justify the horrors that have occurred while exempting the most obvious reason – radical Islam.  Let’s find out why this happened after disregarding why this happened.

It is obviously impossible to deny any correlation between Islam and acts of terror so radical Islamist apologists bend over backwards to make sure everyone knows that it isn't really about Islam. And since it can’t simply be Islam, what could it be? The attempt to find answers leads to characterizations like “crazy,” “coward,” “senseless,” “lone wolf,” “deranged” and so on. But every attempt to find the answers is useless because the only answer has already been disregarded. And, aside from “evil,” the adjectives used to describe these purveyors of death are not only inaccurate, they are the complete opposite of reality.

Crazy: In the book of Genesis, God tests the faith of Abraham by commanding him to sacrifice his son, Isaac. Abraham prepares the sacrifice but after confirmation of his loyalty, an angel of the Lord calls out to Abraham and tells him to not lay a hand on the boy.

Followers of the Old Testament accept this story as a symbol of Abraham’s complete love, fear and devotion to his almighty God. They were never taught to question the mental stability of Abraham. He was merely obeying the will of God.

It is difficult to not view an individual who is willing to strap a bomb to their body and blow up little children as crazy. But to simply label it as just being a mental disorder is to greatly misunderstand the enemy. It may technically be crazy, but their god is telling them to do these things, at least in their own minds. They are loyal servants of Allah.

Cowards: Almost by definition, an individual who is willing to blow themselves up is the opposite of a coward. Evil, soulless and hate-filled are more accurate descriptions. But cowards?  A coward is someone who refuses to do the right thing out of fear of being branded a racist.

Senseless: It is hard for normal people to comprehend certain levels of evil, which makes us characterize certain actions as “senseless.” But again, most acts of terror are, by definition, the exact opposite of senseless. Senseless crimes cannot be prevented because there is no basis for them whatsoever. But these acts of terror are calculated, well-planned, well-organized and the perpetrators are fully aware of their motives and actions. One typically requires all of their senses to carry out such horrific acts of mass destruction.

Lone-Wolf: How many lone wolves does it take to make a pack? The inability to draw the connection between radical Islam and terror has led Western liberals to brand these terrorists “lone wolves.” Even as law enforcement admits connections to terror cells, training camps, radical Mosques, watch lists and various forms of radicalization, the initial gut reaction is to classify any individual who carries out an attack by themselves as a “lone wolf”. The army of Allah appears to be comprised exclusively of lone wolves.

Perhaps London mayor Sadiq Khan best expressed the European attitude toward terror when he said that it was just “part and parcel of living in a big city.” Many Brits echoed Khan’s sentiments in the wake of the Manchester bombing with some claiming to be “desensitized” to the idea of a terror attack. Mr. Khan also added, “I want to be reassured that every single agency and individual involved in protecting our city has the resources and expertise they need to respond in the event that London is attacked.” Seems like a legitimate thing for the mayor to say. But Mr. Kahn’s words represent the mentality that is plaguing many European cities that face the seemingly daily threat of radical Islamic terror. That mentality is that terror is simply inevitable, so they will focus on the response in the aftermath rather than preventing it before it happens.

Until the West wakes up and acknowledges the root cause of terror (the only root cause), it appears as though these acts may indeed become a normal way of life.