Remember When “White Privilege” Was Called “The Protestant Work Ethic”? Why “White Shaming” Hurts Minorities The Most

Joseph Bilello
|
Posted: Apr 10, 2017 9:17 AM
Share   Tweet
The opinions expressed by columnists are their own and do not necessarily represent the views of Townhall.com. 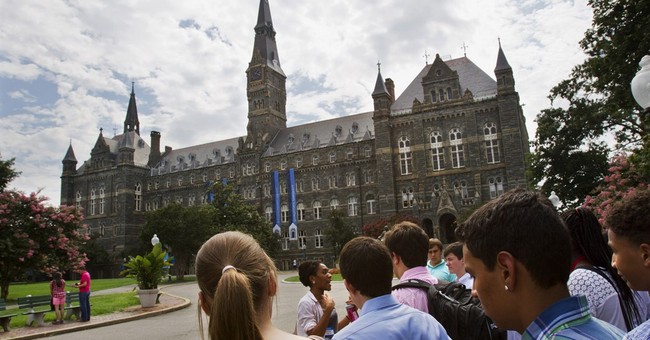 In a classic 1984 "Saturday Night Live" sketch, Eddie Murphy goes undercover to investigate what life is really like for a white man in America. From the spontaneous breakout of cocktail parties on public buses following the departure of the black passengers, to the seemingly limitless amounts of free money given out at the bank, "Mr. White" discovers that life for white people in America can be pretty darn great.

While the satirical skit is clearly a sensationalized dramatization of the privileges white Americans enjoy, to many on the left and in the grievance community, the premise is not that far off-base.

“White privilege” is all the rage these days. From college courses and seminars to “Dear White People” PSAs, the social justice warriors are on a mission to inform the supposedly ignorant about the spoils of white privilege. Stories of children being indoctrinated about the concept of white privilege seem to be a daily occurrence in America today.

But the theory of white privilege being taught in American schools is nothing new. White privilege has been part of the education curriculum for decades. But until recently, the concept was referred to as the “Protestant work ethic.”

The Protestant work ethic, also referred to as the Calvinist work ethic or Puritan work ethic is a sociological and economic philosophy which espouses that an individual and society’s emphasis on hard work, discipline and education are the key factors to achieving a certain level of success.

Critics of the indoctrination of white privilege often cite the negative impact the philosophy may have on America’s white youth. Writing for the website The Blaze, licensed psychotherapist Susan Calloway Knowles asserts that teaching children, sometimes as young as age six, about white privilege is equivalent to child abuse. Knowles believes that “humiliation, degradation, discounting, negating judging or criticizing” are nothing less than forms of emotional abuse that are being inflicting on the innocent. And Knowles is correct. Should white children be made to feel guilty for circumstances beyond their control? Should they feel responsible for the perceived injustices of those who happen to share a similar skin pigmentation?

According to Campus Reform, flyers declaring, “Ending White Privilege Starts With Ending Jewish Privilege,” appeared on the campus of the University of Illinois at Chicago last month, “offering statistics allegedly drawn from the Pew Research Center to portray Jews as enjoying a grossly disproportionate share of the country’s wealth.”

There is a certain irony in accusing the Jewish people of being the beneficiaries of privilege. Perhaps no group has suffered more hardships and discrimination throughout world history than the Jews. But rather than allow themselves to be perpetual victims, they chose to embrace the Protestant work ethic. Jews “enjoying a grossly disproportionate share of the country’s wealth” can be attributed to hard work, ambition, education and strong, intact families, not white privilege.

Just as shaming and demonizing the rich does nothing to impede their success or lift up the poor, shaming whites does nothing to uplift those in minority communities. But it does often have the opposite effect.

The real victims of the theory of white privilege are not America’s white youth. The real damage is being done to those that purveyors of the myth are purporting to help. The left has been hurting black and Latino Americans since the moment they decided they were going to help them. And perpetuating lies about inherant white privilege continues that tradition.

White shaming may harm the sensibilities of white kids, but it is doing untold damage to America’s black and Latino youth. The unintended consequences of preaching white privilege is that black and Latino youth are essentially being told to just give up. They will never be given a fair shot so why bother trying?

Those who subscribe to the theory of white privilege are unrelenting in their belief that such a concept exists despite the obvious illegality of such a premise. Since there can be no state-sanctioned discrimination based on race, those who promote the idea of white privilege often cite economic and educational status as undeniable proof that their theory exists. But based on their own criteria, one would have to conclude that Asian and Indian Americans, along with Jews, are the biggest beneficiaries of white privilege. And they most certainly are if one chooses to refer to white privilege by its proper name, the Protestant work ethic.

Obviously, one need not be a white Protestant to abide by the guidelines set forth by the Protestant work ethic. And this is evidenced by the fact that the rewards of a life spent following the guidelines of the Protestant work ethic are often best exemplified by millions of non-white Americans. The only rule is that strict adherence to the tenets of the doctrine all but guarantee a certain level of success in America today regardless of any external factors like race or religion.

It is true that some people are born with certain advantages others may not have. But for the most part, privilege is earned, not bestowed. And that is the message that must be taught to all of America’s youth.