Joseph Bilello
|
Posted: Apr 07, 2017 12:01 AM
Share   Tweet
The opinions expressed by columnists are their own and do not necessarily represent the views of Townhall.com. 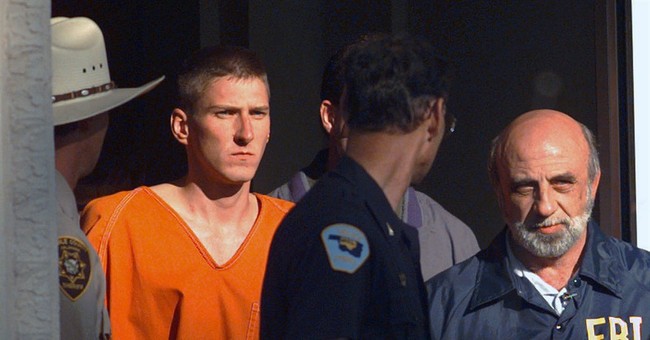 Every Islamic extremist act of terror is an opportunity for some radical Islam apologist to remind us how most Muslims did not slaughter any innocent people and how the Islamic faith played absolutely no role in the attack, even if the perpetrators specifically cite their faith as the motive. It is also an opportunity for some clueless individual to invoke the Timothy McVeigh rule. The McVeigh rule is as follows: We must disregard any and all connections between Islam and acts of terror because a man who may or may not have had a Christmas tree in his home as a child carried out an act of terror nearly a quarter century ago.

During last week’s episode of “Real Time with Bill Maher”, Heat Street columnist and former member of the UK Parliament, Louise Mensch became the latest individual to ignorantly draw a comparison between Timothy McVeigh and radical Islam. In a heated panel discussion about the recent terror attack in London carried out by a Muslim convert, Mr. Mensch proclaimed the attack, “has nothing to do with Islam the same way Timothy McVeigh had nothing to do with Roman Catholicism.”

Critics of media apologists often accuse the press of giving a pass to radical Islam’s influence on acts of terror. But what many in the media are doing is far worse than simply giving a pass. Western journalism has essentially become the P.R. arm of radical Islam, scrambling to do damage control in the aftermath of nearly every terror attack that occurs around the world.

Excuses for Muslim extremism and attempts at justification are actually a creation of the West. Terrorists make no bones about their motives. They proudly cite their Islamic faith as a means to justify their actions. Not only is there no denial of the impact faith plays in their actions, different factions of radical Islam often fight to claim credit. Then a western journalist must step in and say, “they didn’t really mean that. Religion played absolutely no role in their actions. And even if it did, what about Timothy McVeigh?”

In the ongoing effort to figure out just what it is that we are doing to make people feel the obligation to slaughter innocent people, Politico published a column following a terror attack in Brussels titled, “Why do they hate us so much?” Fortunately for Politico, the Islamic State was more than happy to oblige when they detailed, “Why we hate you” in an issue of their official magazine, even mocking those who call Islam a religion of peace. In their marching orders, ISIS urged followers of the faith to, “bring death and injury to the enemy of Allah, the disbelievers.” Okay, their motives do seem pretty clear but what about Timothy McVeigh?

In Feb 2015, the far-left website Think Progress published a piece titled, “What is the real root cause of Terrorism: Poverty or Anger?” Are those our only two choices? What about global warming or George W. Bush? Rather than spend too much effort trying to analyze what the potential causes could be, why not just go to the source and ask? They will be glad to let you know.

Following a terror attack in Munich, the BBC decided to conveniently scrub the name “Ali” from the perpetrator’s name. When a Muslim terrorist driving a truck deliberately ploughed into a crowd in Nice, France killing dozens including children, MSNBC had a curious take on the incident referring to it as a “deadly truck crash”. And the list goes on and on.

Perhaps the best example of how the mind of an Islamic terrorist apologist works, or doesn’t work, was on display in the wake of the Orlando night club shooting. During a press conference with law enforcement following the incident, a reporter could be heard shouting, “Is the FBI tracking the Westboro Baptist Church?” Because everyone knows that carrying signs that read “God hates fags” is tantamount to mass murder.

When not attempting to disassociate any correlation between Islam and terror, the media often just deploy a variation of the McVeigh rule. They bend over backwards to find any attack involving a non-Muslim in an attempt prove that terror isn’t just not exclusive to Islam, it may actually be more prominent among non-Muslims, particularly the dreaded “right-wing extremist”.

On June 24, 2015 the New York Times published an article with the headline "Homegrown extremists tied to deadlier toll than jihadists in U.S. since 9/11". That very same day, the Huffington Post doubled down on the Time’s stupidity while adding their own special twist of idiocy with a piece titled "White supremacists more dangerous to America than foreign terrorists, study says". Both articles cite the number of people who were killed in America following the attacks on 9/11 by non-Muslim extremists (48) compared to the number killed by self-proclaimed jihadists (26). What neither article mentions is that if one, just one of the numerous thwarted Islamic terror attacks like those attempted by the “underwear bomber” Umar Farouk Abdulmutallab, the “shoe bomber” Richard Reid or the Times Square bomber Faisal Shahzad had been successful, the death tolls would be heavily skewed in a far different direction.

The truth about the Timothy McVeigh terror attack is that a deranged and evil man, with no religious motivation, brutally murdered 168 people on April 19, 1995 in Oklahoma City. But unfortunately, the lasting legacy of Timothy McVeigh, because of his Irish-Catholic surname, will be that he remains the poster child for the rejection of associating Islamic acts of terror with Islam.

Why Timothy McVeigh? Because apparently a 22-year-old incident is the freshest example of a non-Muslim mass terror attack on the minds of those who choose to invoke his name. If not for McVeigh, someone might have to tell us to get off our high horses and remember the Crusades before passing judgement on radical Islam, But that would be even more crazy, right?