Trump Judges and the Equality Act

Joseph Backholm
|
Posted: Feb 23, 2021 2:24 PM
Share   Tweet
The opinions expressed by columnists are their own and do not necessarily represent the views of Townhall.com. 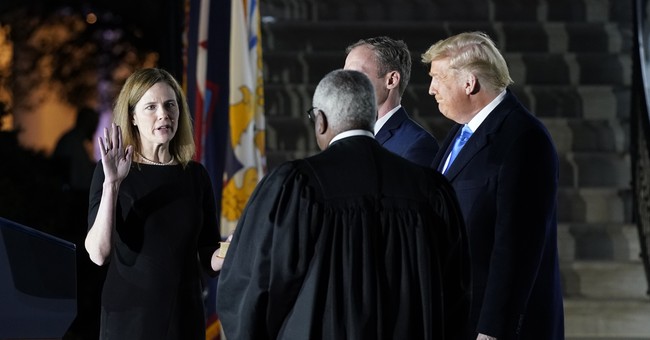 On Thursday, the House of Representatives will vote on the Equality Act, reminding evangelicals and Catholics who voted for Trump why their gamble was worth it.

Perhaps nothing was more curious about the Trump administration than the ability of a temperamental, thrice-married adulterer to be carried to victory by white evangelicals and Catholics.  Those are not obviously Trump’s kind of people. But Trump leveraged serious concerns about abortion and religious freedom to make them his kind of people, politically speaking.

Eight years of Obama saw unprecedented hostility toward people of faith.  Florists and bakers were sued, churches and pro-life business owners were told they must pay for drugs that cause abortions, and schools were told they had to allow boys into girl’s locker rooms. The situation looked to worsen in a Hillary Clinton administration so evangelicals gave their support to Donald Trump in the hopes that the question mark that was door No. 2 might be better than the disaster that lay behind door No. 1.

Four years later, there are three new Supreme Court justices and more than two hundred new lower court judges who Trump said were selected, in part, because of their reverence for the First Amendment and religious freedom. Voters who supported Trump because of concerns about religious freedom may be about to learn just how much they gained after four years of Trump. After all, the Biden administration promises to be what the Hillary Clinton administration would have been.

President-elect Biden has promised to revoke many of President Trump’s executive actions protecting religious freedom and has committed to making the Equality Act an early legislative priority. Why is that a problem?

The Equality Act is probably the clearest effort yet to demand conformity and punish disagreement. On paper, it adds sexual orientation and gender identity to federal non-discrimination statutes.  In practice, it does much more than that.

The Equality Act requires conformity with one specific view of gender and sexuality.  Public schools, public accommodations like hotels and restaurants, recipients of federal assistance and grants, public housing, and private businesses making employment decisions would all face punishment or lose federal funding unless they operated as if men can declare themselves to be women and as if all consensual sex is virtuous.

The Equality Act threatens women’s and girls’ sports at every level. A flurry of lawsuits at the local level are currently sorting through the question of whether biological males who identify as transgender should be allowed or even required to participate as female athletes despite the significant athletic advantages associated with being born male. The Equality Act would mandate that every public school or university allow students to declare their own gender and be able to participate on athletic teams accordingly.

The Equality Act strips medical professionals of their conscience rights.  The dramatic rise in people identifying as transgender and seeking medical interventions is not only an issue for young people facing an identity crisis, but also for medical professionals being asked to remove healthy body parts and functions. The Equality Act threatens the conscience rights of health care and mental health providers because it would force them to ignore their conscience and best medical judgment by requiring them to provide medical services related to gender reassignment.

The Equality Act reduces the number of adoption and foster care providers.  In states like Illinois, we have already seen parents who would not affirm a transgender identity be disqualified as potential adoptive or foster parents through social service programs. The Equality Act threatens to take this practice nationwide, prohibiting families who do not embrace the secular left’s view of gender and sexuality from providing homes for children in need.

The Equality Act is different from similar legislation that has passed at the state and local level because it contains no exemptions for religious organizations.  If it becomes law, the days of accommodating diverse religious beliefs will be behind us.  Ironically, the Left’s insistence that everyone be accommodated at all times and in all ways has led them to a place where they are no longer willing to “accommodate” the convictions of anyone who does not share their enthusiasm for recreational sex and gender reassignment.  “Coexist” has been replaced by “sit down and shut up.”

But all may not be lost. Even if the Equality Act passes, there is still a First Amendment that requires the government to allow people to be different. And behind the First Amendment are more than 200 judges, three of whom are on the Supreme Court, whom President Trump appointed specifically to make sure nothing bad happened to the First Amendment.

If those judges end up saving the First Amendment and people of faith from a government bent on creating conformity, four years from now you’ll have a hard time finding any evangelicals and Catholics who regret their vote for Trump—recent events notwithstanding.