Yes Virginia, Those Spanish Monuments Must Be Defended as Well!

José Niño
|
Posted: Jul 07, 2020 12:01 PM
Share   Tweet
The opinions expressed by columnists are their own and do not necessarily represent the views of Townhall.com. 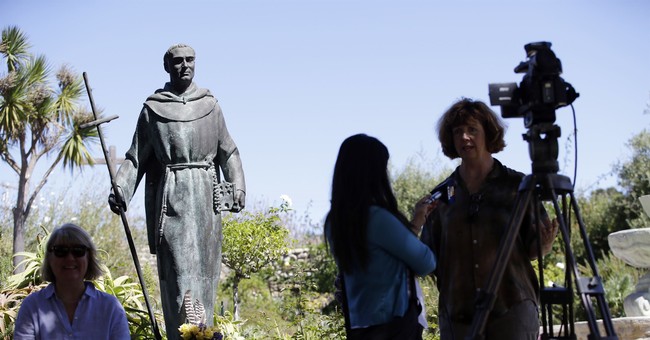 No monument is safe as America undergoes this Kulturkampf, and no statue should be taken for granted or considered less worthy of protection.

First it was Confederate monuments. Low-hanging fruit. For the iconoclastic Left, however, this was merely the appetizer.

As of this writing, the main course is being served. The mob is clamoring to gobble up monuments dedicated to the likes of the Founding Fathers and Teddy Roosevelt. Even the abolitionist Matthias Baldwin was not spared from the leftist frenzy after vandals tagged the statue with paint and graffiti that read “colonizer” and “murderer.”

It would be a mistake to believe that anti-monument saturnalia was just confined to American figures. Indeed, the looney leftists rampaging across the street are equal opportunity iconoclasts when talking about their hatred of European culture.

Those of us who admire Spanish history had much to lament in the last month.

The statue of conquistador Juan de Oñate got a taste of the Left’s hatred starting in mid-June. Known as “The Last Conquistador,” de Oñate served as colonial governor of the Spanish province Santa Fe de Nuevo Mexico in the viceroyalty of New Spain. Under his command, the Spanish were able to settle a significant portion of the Southwest and leave a strong cultural legacy that reverberates to this very day.

Sadly, we live in a time where the past is categorically being discarded by Americans nationwide. First, the county of Rio Arriba removed the Oñate statue in the city of Alcalde on June 15. That same night radical leftist activists took it upon themselves to liberate Albuquerque of Oñate’s presence by attempting to knock down his statue.

After a violent scuffle that ended in gunfire, several people at the protest were arrested. Shortly thereafter, the city removed the statue. The city has yet to determine what it intends to do with the statue, but if current events are any indicator, it will likely join in the radical fervor and remove the statue for good. That’s 2020 for you.

Oñate was not the only Spaniard who saw his likeness defiled. A wacked out mob went on a rampage during the evening of June 19 in San Francisco’s Golden Gate Park looking for monuments to take their anger out on. Like good self-hating leftists, they applied their irreverence equally to dead white men by knocking down the statues of national anthem author Francis Scott Key, Union general Ulysses S. Grant, and Franciscan friar Junipero Serra. Unlike the first two, Serra was not an American. Nevertheless, his Spanish extraction was enough to trigger these leftist hooligans.

After the Serra statue took a beatdown from vandals, the Spanish Embassy in the United States had the decency to call out the vandals and highlight the contributions that Serra made towards promoting the welfare of the indigenous and protecting them from the excesses of unscrupulous Spanish administrators.

Javier Úbeda, the mayor of the Spanish town of Boadilla del Monte offered to house the statues of Serra and author Miguel de Cervantes (who also wasn’t spared by vandals). The mayor reasoned that these two Spaniards were “architects in part of what we so proudly today call western civilization.”

Mayor Úbeda’s comments are a breath of fresh air in today’s consumeristic world where pursuing instant gratification rather than cultivating a national sense of self is encouraged.

Sadly, the historical insolence continues, but now via mayoral fiat. The city of Columbus, Ohio, decided to kick July off on a low note by removing its statue of Christopher Columbus.

For lovers of Western history, 2020 has been a rough year to say the least. Mobs and spineless local officials continue to erase artifacts of our predecessors on a daily basis it seems.

Any self-respecting nation stands up for its own — past and present. The good and the bad. There are no perfect nations, but there are definitely cultures that have clearly distanced themselves from the rest of the pack. The West is one of those. As heirs to the civilizations that the Greeks and Romans built, it is incumbent upon us to defend ourselves from external and internal threats.

This is not a debate of Republican vs. Democrat. It’s about the existence value of the West. If we’re not willing to defend our culture and our institutions, brace yourselves for dispossession at the hands of the Left. The West has a right to exist and not be swallowed up by the amorphous blob that is globalism.