Change We Can Believe In But Only Loathe 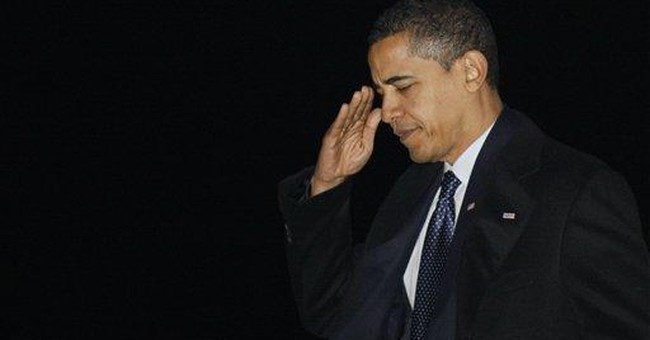 Leaving slavery in Egypt, having miraculously crossed the Red Sea and fed from the daily miracle of manna, and being led by no less than the presence of the Lord, the Israelites nevertheless complained. Loudly. Every step toward freedom was resisted by people moaning that they had things better as slaves back in Egypt. At one point their constant whining for meat to eat brought about an interesting response. The Lord told the people through Moses that they were going to have meat, and eat it, "until it comes out of your nostrils and you loathe it" (Numbers 11:4-20).

H.L. Mencken once defined democracy as "the theory that the common people know what they want and deserve to get it good and hard."

And here we are, as Americans, still notable among nations for having progressed farther in pursuit of human liberty than any other, brought to a halt in the wilderness. A grumbling rabble seeks a return to state slavery, a life planned by government grunts, which appears preferable to them than the boundless opportunities of a life of freedom and individual responsibility. And now we're going to get it, good and hard. It's going to get shoved down our throats till it comes out of our nostrils and we loathe it.

Few Americans — right, left, center — were left who actually wanted Pres. Barack Obama's healthcare reform. By Christmas Eve, when the Senate passed that two-thousand-plus-page perversion that few of them had even read, the dwindling minority of supporters may well have been the president, his administration, 60 favor-grubbing senators, and 220 graft-grabbing members of the House. Not that it mattered. In a tyranny, the will of those with political power is the only criterion for action.

From sea to shining sea, the people have been saying no to this blatant power grab. From the very moment this past summer when people found out what Obama and the Democrats really had in mind with it, they have opposed it, and their opposition has steadily and inexorably grown. That crucial summer, the president staged a series of ridiculous Very Important Speeches by which he fully expected to sway opinion by the sound of his voice. After all, he is a Much Better Orator Than George W. Bush. But not even the words scrolling up the teleprompter held the power to dislodge a citizenry armed with information.

The responses from the president and his party did nothing but solidify opposition to them. The stimulus deceit had already jarred the public awake to how this president planned to go about governing. Gone were their cherished myths about the post-partisan, post-racial Healer of Divides; they stared now at the revelation of a parboiled partisan holding them in high contempt, gleefully fleecing them in collusion with Congress at a rate previously unheard of in American history for the benefit of his party and their allies. Trampled underfoot were manifold electoral promises of open government, fiscal responsibility, the end or earmarks and so on.

The "Bridge to Nowhere" — that symbol of Republican fiscal irresponsibility over which they purported to share the public's outrage during 2006 and '08, solely to their political gain, we see too late — now looks quaint compared with Democrats' deeds in 2009 (and it wasn't quaint). The public, defrauded, took to the streets, the Tea Party Movement was born, and it dwarfed the public swell that carried the charlatan into high office. Himself and his party slandered that movement in hysterical fashion.

Slander was the first, and reflexive, reaction to public outrage over the healthcare deceit as well. Democrat hopes of passing it in early July faded as Congressional phone lines melted. The August recess loomed large. For once, the people getting it good and hard were the ones who truly deserved it — the tricksters in office having to witness in person a second, massive public movement protesting their duplicitous attempts to seize power. Pejoratives flew — the irate bamboozled were said to be racists, thugs, Klansmen, Nazis, some other kinds of evil, anything but well-thinking individuals engaging in First Amendment rights whose opinions merited the least bit of serious attention.

This process of demonization continues to this day (in the Senate debate Christmas week, opponents were compared to lynch mobs, the Nazis on Kristallnacht, and Aryan support groups, among others), but after the August debacle, Obama and his party changed their approach to the issue. No longer did they care to win over public opinion. There were no more Very Important Speeches. They recognized that the enemy wasn't ignorance of their plan, it was too much information. So they went to war against the informers, especially the Emmanuel Goldsteins du jour of talk radio and Fox News, but in that they received a rare check from the press, who for once perceived the logical end of a statist policy.

More importantly, they adopted stealth as a policy. Experience had proven that in the Internet era, they couldn't even hide their true aims in the haystack of over a thousand pages of legislative gibberish. So despite promises of giving the public 72 hours of review, they hid the haystacks, they doubled their sizes, and they changed them at the last possible minutes. Promises were useful only to give the voters the appearance of what they wanted, good for gaining political power but, it turns out, quite counterproductive for enlarging it.

They also relied on another form of subterfuge. Given that working men and women, veterans, parents, grandparents, and all other kinds of well-scrubbed, unlikely protesters were willing at a minute's notice to flood congressional phone lines, go to congressmen's regional offices, and even hop a bus and descend on Washington whenever anyone was willing to schedule a demonstration against the bill, the Democrats decided to give these regular-Joe protesters the appearance of what they wanted; i.e., they pretended to be listening.

So whenever a key vote was secretly in the near future, key Democrat functionaries informed the press that they were deadlocked and the process might drag out till next spring. Any momentary lull in this unprecedented public activism, when we the people tried to grab our breaths and dared hope that this nation wouldn't be plunged into state socialism by people who are supposed to represent rather than tyrannize us in the halls of our nation's government, was all it took for our fears and their darkest dreams to be realized.

Just to be sure they could catch us sleeping, they scheduled votes when honest people slept. Or, in the latest case, when people gathered with their families to celebrate the birth of eternal Hope and a real Messiah. While children lay nestled all snug in their beds, no one dared imagine what visions of goodies were dancing in Democrats' heads.

Christmas Eve. The cynicism of that particular choice to time this vote surpasses all. If it's possible to make a mockery of a mockery, it did that when it made real Sen. Hillary Clinton's risible campaign advertisement in which she showed the voters what presents her administration would give us, healthcare reform being one. That was during a different time, with a more readily gulled public. Now it was clear to all that theirs was no gift-giving moment; it was outright theft.

Now the public knows that the gifts the Democrats are giving this Christmas are for themselves, only for themselves, in the face of great public opposition, fully aware of the great contempt with which they are treating the people, and smug in the knowledge that the public also sees this contempt and can do nothing more about it. Witness the nanny-nanny-boo-boos of the Nanny Staters.

We voted them in power last year, as our representatives, which they have no intention of being. We're going to get their tyranny shoved down our throats good and hard till it comes out our nostrils and we loathe it. Will we remember the stink, and for how long? On the resolution of those questions rests any prospect for the return of liberty to this soil, which once was the land of the free.

Epilogue, Numbers 11:33-34: Immediately after the complaining Israelites received all the meat they could eat, "while the meat was still between their teeth" they were struck dead by a severe plague. The Israelites called the place "Kibroth Hattaavah." I'm told it translates as "the graves of craving."