The Significance of Christian Support for Israel

Jonathan Feldstein
|
Posted: Nov 16, 2020 12:01 AM
Share   Tweet
The opinions expressed by columnists are their own and do not necessarily represent the views of Townhall.com. 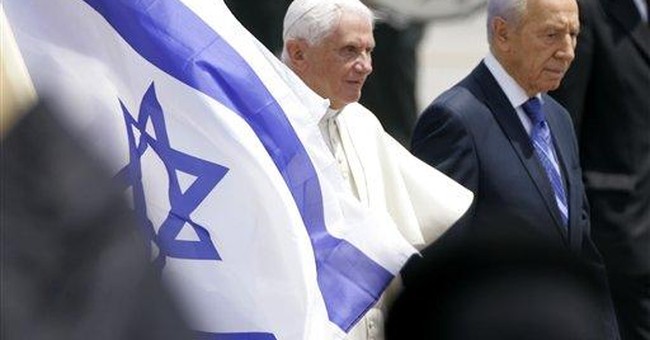 I was interviewed by a journalist recently about the phenomena of Christian support for Israel. As much as this is something that has been central in my life for most of my adult life, it’s something that most don’t understand.

The interview came up in light of two recent events but needs to be discussed openly as most Jews don’t understand. It’s a phenomenon that’s revolutionary, turning the tide on the history of Jewish-Christian relations since the early church 1700 years ago which most Christians don’t understand.

For most of my career, and a significant part of my adult life, I have been centrally involved in building bridges among Christians of all backgrounds. It’s the raison d’etre of the Genesis 123 Foundation of which I have the privilege to be president. Together with a diverse board, we have pioneered a variety of programs that bring Jews and Christians together, building understanding with an emphasis on the things that unite us: the God of Israel, the Land of Israel, the People of Israel, and the State of Israel.

I was always aware of perfunctory interfaith activities, such as model Passover Seders and the like. These make people feel good, but rarely engendered very much substantive personal or ongoing interaction or genuine relationships. Over the decades, as I have spent my time building bridges anchored in meaningful personal relationships, I realize that despite how far we have come, there’s much more to be done.

Too many Jews believe that Christian support for Israel has a nefarious agenda.

Indeed, Jews and Christians have some major theological differences. These should not be ignored. But there’s much more we have in common, beginning from the very foundational elements of the Torah, and all of Tanach, which represents some 80 percent of the Christian bible. Yes, maybe there’s an agenda among some who don’t support the growing fellowship and healing of a breach that started when “the Church” defined itself by “replacement theology.” Many, maybe even most Christians, don’t know the history of “the Church” including horrific crimes against the Jewish people. For many who do understand, there’s a significant element of repentance involved with their relationship with the Jewish people today.

For most, Jews and Christians, there’s a centuries-long breach that takes time to bridge. While I and many others are actively engaged in doing so, and we want everyone to see and understand things as we do, undoing this rift takes time.

I explain to Christians that Jews carry millennia of baggage, including horrific persecution in the name of “the Church” and Jesus. Please give us time. Conversely, while aware of the phenomena of Christian support, most Jews don’t understand, don’t trust, or simply don’t care.

Ironically, many Christian friends had never heard of the term “replacement theology” and when it’s explained to them, they shudder in horror, disbelief, and embarrassment that was ever (and still is) prevalent. For many, it’s another thing for which they feel compelled to repent.

So, what’s the significance of Christian support for Israel and why is that important?

Of course, it’s true that financial support is important. Christian support positively impacts tourism to Israel, and donations to a wide range of non-profits. The significance of these is not to be taken for granted nor dismissed. However, personally, I hate the objectification of so many good Christians who are viewed as a faith-based ATM, with some just trying to get money out with very little relationship. This is common among too many, Christians and Jews, whose non-profits make claims and take advantage. Tourism professionals sometimes miss the boat by emphasizing the significance of tourism for the Israeli economy, but not the significance of visiting Israel as a pivotal milestone in adding depth and dimension to one’s faith.

Diplomatic and political support for Israel is also critical. Many are involved in this formally, both among influencers in countries around the world and on a grassroots level. The latter is particularly important in democratic countries where Christians have influence among their leaders. Israel has many natural resources, in addition to its special brainpower that drives so much of the startup nation reality that benefits the world. Having too many friends has never been one of our challenges. When Christians support Israel on a grassroots level, that also trickles up.

An example of this is the recent Global Prayer for Israel and Virtual Pilgrimage in which thousands participated in a hands-on way, from all around the world.

The third point that I answered the journalist as to the significance of Christian support for Israel is prayer. Most Jews and Christians believe in God and, in our respective ways, the value and importance of prayer, especially when that prayer is to the Creator. As much as it’s the case that Israel cannot have too many friends, another thing to which most would agree is that you can’t have too much prayer.

Israel’s independence was a theological tsunami. Until then, most of “the Church” was rooted in centuries of thinking that God was done with the Jews. That we had not yet been restored to Israel fed this notion, paradoxically undermining the faith of its adherents. If nothing else, Israel’s independence was affirmation that not only was God not done with us but that He has affirmed His promises vis a vis the Jewish people as in the Torah.

The return of the Jewish people to Israel after thousands of years in exile is not only not a coincidence, but a fundamental prooftext of the Text, a foundation which Jews and Christians have in common. The imperative before us is to build upon that, for these and many other good reasons.