Neil Armstrong's Most Significant Steps Weren't On the Moon

Jonathan Feldstein
|
Posted: Jul 15, 2019 12:01 AM
Share   Tweet
The opinions expressed by columnists are their own and do not necessarily represent the views of Townhall.com. 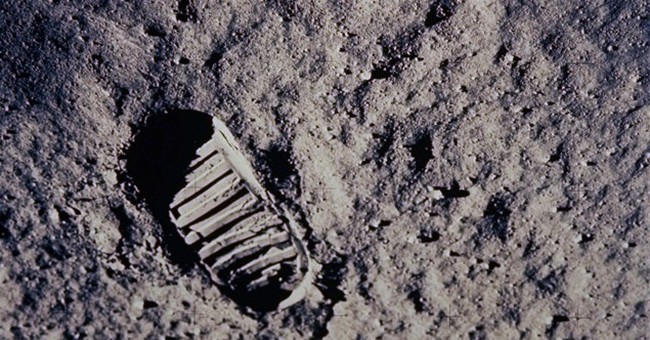 Fifty years ago this week, Neil Armstrong uttered what remains one of the most iconic statements relevant to all of humanity except for the Bible.  “That’s one small step for man, one giant leap for mankind.”

Who knew that decades later, Armstrong would do something even more significant than being the first man on the moon, and that it would be biblically rooted?

Armstrong’s first moon walk and inspirational statement acknowledged the incredible individual achievement of being the first person to step on the surface of the moon, but it was also the product of a great team effort.

Armstrong embodied a particularly American value of going beyond what seems to be physically possible. As one of the early astronauts, he also overcame unique personal physical endurance challenges. History has recorded the achievements leading up to and including his first step on the moon as the sum of many individuals’ dedication, including in recent acclaimed films such as Apollo 11, First Man, and Hidden Figures.

The emphasis on his own single step focuses the imagination on an individual’s ability, and is a metaphor about achieving many things, one step at a time. It still provides a vision for anyone setting out to achieve an extraordinary goal.  This can be the case with human achievement, as well as overcoming personal challenges.

Armstrong was a model for both, something underscored and facilitated by his faith.

At the most basic level, Armstrong put his faith, and fate, in God’s hands.  Space travel was not unique when he took off in July 1969, but at that point nobody had landed or walked on the moon. Any number of things could have gone wrong, and Armstrong would have been remembered differently. But he had faith, in God, and in the God given abilities of the vast team that made his personal achievement possible.

Armstrong also overcame personal challenges, including the death of his young daughter. But his faith remained strong.

More than two decades after his first moon walk, Armstrong visited Israel where he didn’t chart a new path, but followed an old one. Because of his faith, this was something that he acknowledged as being even more significant than his 1969 moon walk.

When Armstrong visited Israel in 1994 he was brought to a place in the Old City of Jerusalem and asked Meir Ben-Dov, his host and noted archeologist, if Jesus himself actually would have walked there.

“I told him, ‘Look, Jesus was a Jew,'” recalled Ben-Dov. “These are the steps that lead to the Temple, so he must have walked here many times.”

Armstrong asked if these were the original steps, and Ben-Dov said that they were.

Indeed, we know that for a Christian, visiting Israel is a life-changing and faith building experience. This is played out in numerous ways including visits to the Old City and specifically the Temple Mount where Jesus preached and worshipped, along with where he was crucified, to the Jordan River where he was baptized, and of course the Galilee, and Nazareth, his hometown.

The footsteps that Armstrong followed in Jerusalem 25 years after his moonwalk were not unique.  Millions of Jews ascended to worship in the Temple on these very steps, including Jesus.  And millions of pilgrims have traced these steps in a literal faith walk. But Armstrong had the presence of mind, and faith, to realize this significance, to walk in Jesus’ footsteps, literally, was more significant than walking on the moon.

He made no iconic public statement walking in Jesus’ footsteps. He didn’t need to. A pilgrimage like that is between the individual and God.

As much as there are countless affirmations of Christians visiting Israel and having divine experiences, Neil Armstrong’s comments and frame of reference considering that he was the first man to step on the moon uniquely affirms this reality.

Ask any Christian who has been to Israel and at least nine out of 10 times you’ll hear a similar affirmation, and the desire to visit Israel again. And again.

The comparison of Armstrong’s single step as a challenge to move forward in any goal could not be more appropriate than depicted in the opportunity of Run for Zion.  Run for Zion brings Christians to participate in a unique running and walking pilgrimage throughout Jerusalem, literally standing alongside tens of thousands of Israelis, passing through the ancient city that King David established as his throne, and in which and from which Jews and Christians have continued to exalt God for thousands of years.

And yes, Run for Zion offers the opportunity to run or walk in the footsteps of Jesus while giving participants the ability to deepen their own faith and challenge their personal physical limits.

Just as in Jesus’ time, Jews from throughout the Land would ascend to make a pilgrimage to Jerusalem by foot, Run for Zion offers Christians the opportunity for a unique meaningful pilgrimage and service experience in the heart of Jerusalem, interacting with Israelis, and blessing Israel materially.

Rather than seeing Jerusalem through the windows of a tour bus, Run for Zion’s experience gets participants off the bus, walking the Land, and fellowshipping and serving its people.

And because God says that he will bless those who bless Israel, Run for Zion has a visionary model to subsidize the ability for more people to come to Israel at a reduced price and possibly even for free. Details of Run for Zion’s subsidies can be found at RunforZion.com.

One day, moon travel may be available commercially and you can retrace Armstrong’s steps there 50 years ago. Now, however, retracing his steps in Jerusalem, where Jesus walked 2,000 years ago, is possible. Don’t miss the opportunity to experience what Neil Armstrong experienced, first by taking a series of steps running or walking throughout Jerusalem, literally following the footsteps of Jesus. And second, to go beyond one’s physical limitations at the same time as adding dimension and perspective to one’s faith.