Jonathan Feldstein
|
Posted: Dec 24, 2018 12:01 AM
Share   Tweet
The opinions expressed by columnists are their own and do not necessarily represent the views of Townhall.com. 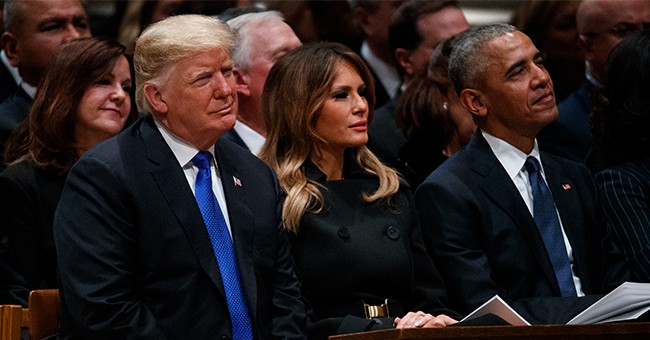 I will never forget the first time I realize that Barack Obama was clueless about the Middle East.

I was traveling in the US during the 2008 campaign. An Obama commercial stuck with me like a bone in my throat.  In speaking about the Middle East he said something to the effect of ‘we will withdraw our troops and end the war in Iraq.’

Immediately I understood that he didn’t understand the Middle East, or was playing politics at the risk of losing a war.  I wrote, then, that was like winning a game of Monopoly by turning the board upside-down. Wars are not ended by quitting. When combatting insidious ideologies of extremist Islam, such a strategy just creates a void and makes the enemy stronger.

Obama was elected president later that year. I hoped the naivete he displayed would be replaced by a more pragmatic policy.   What I came to believe was less that Obama was naïve, but more that his rhetoric was rooted in a calculated political agenda that was the most Islamic oriented in any US administration, during which he spent more time than ever trying to separate Islam from “violent extremism.” Among other things, this was a dangerous if not deliberate way to convince people that Islam in general, and Islamic extremism, were not enemies of America or democracy.

It seemed that other than being Commander in Chief, Obama was also Contortionist in Chief.  At the end of two terms he is responsible for a period during which Islamic extremists took root in and permeated the Middle East, making both it and the rest of the world much less safe.

One of the symptoms of Obama’s failed middle eastern policies is a horrendous civil war in Syria that’s left hundreds of thousands dead and many more refugees. Obama cannot get all the blame. However, had he adhered to the red lines he articulated, not added fuel to the raging fire of the “Arab Spring,” and had he asserted US influence in Syria with a pro-active policy, things would have come out differently.

Syria is now defined by Russia and Iran asserting their influence, and the world powers all but acknowledging their hegemony there. Until this week, one remaining hope was that the US would maintain its presence, balancing if not counter acting these anti-Western influences, one of which defines Islamic extremism, two words that Obama would not even utter together.

Now, its President Trump’s turn to fumble the Syrian ball.

Last week he impulsively announced a unilateral withdrawal of US troops from Syria, drawing pushback from republican allies, challenges from military officials in the Pentagon, triggering the resignation of Defense Secretary Jim Mattis, and the ire of other western countries.

The ire from other western countries is somewhat laughable.   If they were so concerned with the potential vacuum and resulting problems from a US withdrawal, perhaps they should have (or maybe would now) provided increased troops of their own to buttress the US presence.  On that level, Trump’s comment that he doesn’t want the US to be the world’s policemen in the Middle East has some validity.

The issue is not so much about policing the Middle East for its residents (though there’s a legitimate reason to do so), as it is policing the Middle East for the rest of the world.  Its also ironic considering so many of these western countries now critical of the US withdrawal have allowed virtually unrestricted immigration from Syria and other countries, bringing with it an influx of Islamic extremism that’s breached the European continent.

The concerns of Secretary Mattis and others in the Pentagon are valid. US withdrawal from Syria creates a vacuum, one that will be filled by Iran as they extend their influence across Iraq, through Syria and into Lebanon.  Maintaining a presence in Syria is not just about being policemen for others, it’s a matter of asserting US interests.  I don’t know if Trump Is just naïve but an active presence throughout the Middle East is necessary and is in the US’ interest. Unlike Obama whose policy emboldened the extremists, it’s unclear what Trump’s policy is, or if he even has one.   What is clear is that the plan to withdraw from Syria is not in synch with US’ military leaders.

First, creating a void in Syria that will be filled by Russia and Iran very much contradict US interests. Ceding that unilaterally is bad policy at best. It’s ironic that Trump canceled a meeting with Russian President Putin over the seizure of a Ukrainian ship, but now is effectively ceding Syria to Russian (and Iranian) control.

Withdrawal from Syria is also against the interests of the Kurds who, as US allies should be supported and not set up for an onslaught from within Syria, the Turks, or Iranians.  If its true that part of the reason for Trump’s withdrawal is because of an anticipated attack by Turkey on the Kurds, this is an outrage because Turkey can hardly be considered a US ally.

The domination of Syria by an erratic Russia and belligerent Iran is bad and dangerous for US allies Israel, and relatively moderate Sunni Arab countries, Jordan, the Gulf Emirates, and Saudi Arabia.

Regarding the Saudis, it’s ironic after all the world attention on the murder of a single Saudi writer and discrediting of its Crown Prince, the Syrian butchering of hundreds of thousands of people does not offend the world’s sensibilities or make President Assad any less legitimate to remain in power.

Trump had the opportunity to restore alliances with US allies who had become disenfranchised in Obama’s wake.  Now, Trump risks disenfranchising the same allies and raising a question again, whether the US is and can be a reliable partner.

Unless reversed, Trump’s Syrian fumble will become a win for Russia and Iran, hardly the kind of “winning” that he campaigned on, or that will make America anything other than at greater risk.