Protecting Our Children from Poland

Jonathan Feldstein
|
Posted: Aug 01, 2018 12:01 AM
Share   Tweet
The opinions expressed by columnists are their own and do not necessarily represent the views of Townhall.com. 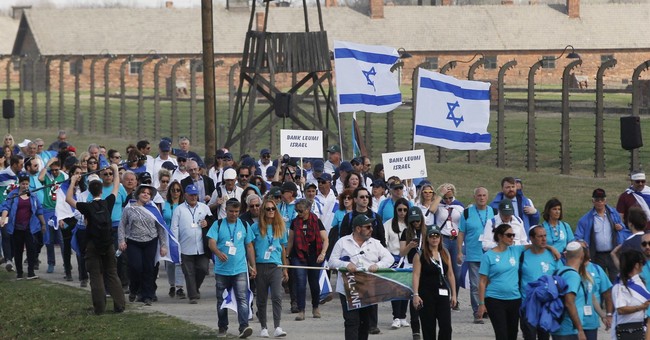 This week, the fourth of my children visited Poland. Though the immediate threats to Jewish life in Poland today are not what they were 75 years ago, I can’t escape the need to protect her from Poland, our history, and its horrors. I don’t fear for her physical safety, but I do fear her loss of innocence as she will be exposed to the horrors to which our people, and specifically dozens of our relatives, were subject, and murdered.

I’ve been to Poland and I’ve witnessed concentration camps, death camps, the gas chambers, and the crematoria. I’ve been to cities and small towns that once thrived with Jewish life, and in which now not a single Jew lives. I’ve been to synagogues whose walls remain scarred with the marks of bullets shot at Jewish worshippers, and I’ve been to towns where entire Jewish communities were rounded up and locked in their synagogues, in some cases to be burned down with the entire community inside.

I’ve never been to the towns from which my grandparents were lucky to escape as young adults along with some of their siblings. However their stories resonate in my DNA as to what their parents, siblings, nieces and nephews, and friends and neighbors suffered, and the anti-Semitism to which they literally became victims.

My daughter’s visit to Poland this week is particularly meaningful considering that we also celebrate my youngest son’s bar mitzvah. He is our sixth child. The only one born in Israel. His birth alone fulfills the dreams of our relatives before us who could only pray for, and possibly never truly imagine, the life we are blessed to have in Israel.

He is named for my great grandfather, Shalom Yakov, who foresaw life for Jews in Poland getting dangerous and more precarious, and was able to get four of his children out before it was too late. In the end, however, he along with my great grandmother and their many other children and grandchildren, were murdered by the Nazis and their Polish neighbors.

My son is also named for my father‘s first cousin, Yosef, who was a little boy of four or five at the time my other great grandfather left him and his wife behind in hiding while seeking help and a place of refuge along with his older son, Shlomo. When my great grandfather and Shlomo went back to find their family, they learned that they had been rounded up and murdered.

I often put myself in the place of my two great grandfathers, who only lived a few miles apart but may have never known one another.  I am awestruck that in both cases, while my great grandfathers couldn’t do anything to change their circumstances, they also didn’t simply fall victim to the Nazi horrors in Poland.  One survived with one son, but lost his wife and younger son.  The other was able to save four children, but despite seeing the writing on the wall, had no escape for himself or the rest of his family.

In both cases, they were driven to save as many of their children as possible. It’s impossible to imagine fully what was going through their mind: their thoughts, fears, and prayers.

But as a parent I do know the absolute imperative to save their children must have driven and weighed heavily upon them. They probably prayed to God fervently, and lost sleep and were fearful much of the time. One great grandfather was murdered along with his children and grandchildren.  The other left behind his wife and youngest child to find a place of sanctuary in which they could be safe, and must have regretted until the day he died that he was not able to save them.

At least in part due to the miracle of the survival of the few who were lucky enough to escape, our family thrives in Israel today.

My daughter visited the towns and cities in which Jewish live thrived, and the death camps where Jewish life was snuffed out.  I wish she didn’t have to go there, to bear witness, and carry our history with her for the generations that will come from her. But it’s part of us. As much as I’d like to protect her from this, I realize I can’t and shouldn’t.  Someone once said ‘that which doesn’t kill you will make you stronger.’  I pray that she will be stronger for this experience.

I spoke to my daughter just before boarding her flight along with dozens of classmates who she grew up with.  As emotional as I was, I wondered what my great grandparents thought in departing from their loved ones.  When they said goodbye, did they know or think it would be their final goodbye?  Did they have hope of seeing one another again?  Did they imagine that their sacrifice would enable future generations like us to thrive?  Or were they just too sad and fearful to have any of these thoughts?

My daughter will come home physically and emotionally drained.  Two days later we will celebrate her little brother becoming a bar mitzvah.  God willing, we will continue to have many future family celebrations.  But always, we will carry this baggage of our past.  As her father, I just want to try to make the burden lighter.

When I speak to my son at his bar mitzvah, I will remind him that he carries the names and memories of two relatives who we never knew, and as the only Israeli born child in our family, has a unique responsibility to carry with him the obligation to live for them.  They could never imagine that 75 years after their murder, a child with their DNA and name would be thriving in the Judean Mountains.

With every soccer ball he blocks at the goal, as he reads from the Torah affirming God’s Oneness, as he grows and excels in school, and one day joins the IDF, he will carry forward the responsibility to never forget, and to be part of ensuring that we as a people will never be in the same position that we were generations ago.

With God’s help and each of my children understanding their responsibility, and despite my feeling of a need to protect them, they will be part of building a bright future for us and all of Israel.