In the Wake of Trump

Jonathan Feldstein
|
Posted: May 30, 2017 10:34 AM
Share   Tweet
The opinions expressed by columnists are their own and do not necessarily represent the views of Townhall.com. 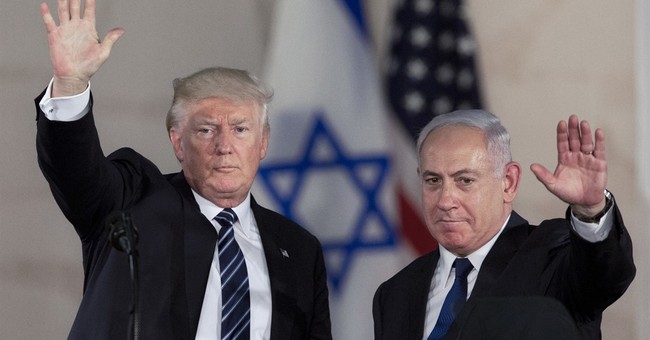 President Trump’s visit to Israel last week is now ancient history but that doesn't stop friends from overseas still reaching out to ask my thoughts. Here are a few.

Overall thinking here is that the visit was good albeit brief. There were great optics but it was light on substance, that we know of.  Rumors abound as to private conversations but the question is what will really come out of it all, and that we won’t know for some time.

A freshman member of Knesset engaged in the most embarrassing part of the trip by imposing himself within, and then taking a selfie at, the receiving line with Trump. Israelis derided this, calling MK Hazan, among other things, a “clown.”

There was disappointment among those who especially thought Trump would fulfill his promise and announce moving of the US embassy to Jerusalem.  It’s not certain that he won’t, but it wasn’t done, yet. It’s possible that a quiet administrative change could happen since building a brand-new building would take several years at least. A friend who is closer to the pulse suggested that the Arab leaders around us really don't care about this, as much as it being a possible brazen move that will ignite the “street” in their respective countries and create a violent backlash.

It's entirely plausible that some of the more public statements by both American and Israeli figures may have been part of the reason why no such announcement was made now at least. All eyes are on June 1 when the president has to sign a waiver deferring the law to move the embassy (as all have done before), or not.

There was definitely a feeling of genuine mutual respect, friendship, and partnership during Trump’s 28 hour visit, specifically with Prime Minister Netanyahu as compared to the previous administration. Most Israelis did not feel warmly to Obama, or that Obama really had Israel’s back.  So the change in attitudes was a breath of fresh air, albeit lacking anything substantial.

History was made with the first public flight from Saudi Arabia to Israel, and President Trump mentioned Saudi King Salman with great praise in almost all of his public appearances. There's hope that Trump discussed serious issues with the Saudi King that might help to resolve the broader Middle East conflict.

Some of the president's activities during his brief visit both excited and upset Israelis, and our Palestinian neighbors, equally albeit differently. For instance, President Trump made the first visit ever to the Western Wall by a sitting president. That was historic and especially moving for Israelis to see him, the First Lady, and his Jewish daughter and son-in-law quietly praying at the ancient stones of the Wall that retained the foundation of our First and Second Temples.

This visit was not without controversy as Palestinians bristled at the president acknowledging the fact that any of Jerusalem’s Old City has anything to do with Judaism. Some Israelis bristled that the president did not include the Prime Minister at this visit to the Wall, and that prior to the visit a US official stated publicly that the Western Wall is not part of Israel.

The next day Trump visited Bethlehem where he met with Palestinian president Abbas, their second meeting in a month. This irked many by giving credence to a man whose term ended several years ago, for whom there have not been elections since, who does not control all of the territory or population which he claims to represent, because he leads a Palestinian Authority that incites terror, and pays millions to the terrorists and their families.

Boldly and directly, and in the wake of the horrific terrorist attack in Manchester, President Trump called out the Palestinian Authority saying that there cannot be peace in a society that glorifies, supports, and funds terror. Abbas may have had to choke back a rebuttal, but being called out like that directly, and on his home turf, made some of those who thought he shouldn’t  visit Bethlehem at all feel somewhat redeemed.  Recent reports that Trump yelled at Abbas for “tricking” him, followed by minutes of awkward silence, added to this redemptive feeling.

The Palestinians were also irked that Trump didn’t affirm their narrative that “settlements” are the obstacle to peace.  Trump knows better, and if the Palestinians want his support, they may be realizing they need to take responsibility for preventing peace on their end, rather than blaming Israel at every turn.

Trump was whisked to Yad Vashem, Israel's national holocaust memorial, to lay a wreath and pay respects to the 6 million Jews murdered. Yet this visit as well was not without criticism because of its brevity, and afterword because of what Trump did or didn't write in the guestbook. However, it's always stirring when a world leader pauses even for 15 minutes to acknowledge and memorialize the unspeakable horrors that we suffered several decades ago. And it's especially noteworthy doing so with his Jewish son-in-law, the grandson of Holocaust survivors, standing feet behind him.

Many criticize the more than $100 billion military support Trump announced in Saudi Arabia and are concerned for maintaining Israel’s qualitative edge. But after he left it was announced that Trump pledged an additional $75 million in US military aid for Israel.

Hopefully despite a formal peace treaty between the two, with the alliances that President Trump seems to be trying to build, these arms will never be directed at one another, but rather at a common enemy.

Whereas President Obama raised the level of Palestinian intransigence by being more hardline in many ways than the Palestinians, pushing Abbas up a tree without a ladder to climb down, Trump the builder may understand that achieving peace needs to be upon a foundation based on reality, not on lies and violence.  Whether that will help Abbas down or not remains to be seen.  But if nothing else, Trump knows how to build tall buildings with elevators.