Are We To Blame For The Alex Jones Problem?

Jonah Goldberg
|
Posted: Aug 10, 2018 12:00 AM
Share   Tweet
The opinions expressed by columnists are their own and do not necessarily represent the views of Townhall.com. 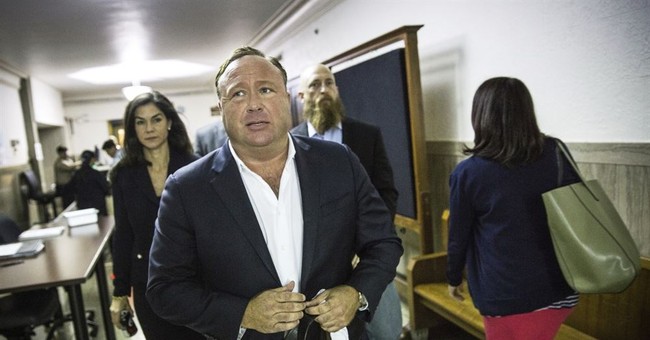 The behemoths of the internet have shunned Alex Jones, the worm-tongued, often shirtless conspiracy theorist and paranoia monger who hosts a show called "Infowars." The debate over this cartel-like decision is much larger than Jones now, and it's taking place mostly on the right.

While I have no love for Jones, the reasons offered by YouTube, Apple and other platforms for dropping his show leave a bit to be desired. The ostensible rationale for exiling Jones, who famously accused the victims of the Sandy Hook mass shooting of being "crisis actors," is that he spews "hate speech."

Hence the debate on the right. Much of the left has already made peace with the idea that some voices it doesn't like -- on campus, on the internet, in the mainstream media -- should be silenced. The well-founded fear on the right is that Jones could be just the beginning.

Dropping Jones isn't the problem. Using hate speech as the excuse is -- because the definition of hate speech is often simply any speech the left hates. That these private corporations seemed to coordinate with each other offers a glimpse of a future in which Big Internet silences dissident voices from the right.

Both supporters and critics of the decision understand that concern. Some argue that Jones is a fairly unique case. As Alex Griswold of the Washington Free Beacon sardonically put it, "First they came for Infowars, and I didn't say anything because I didn't like Infowars. Then they never came for me because I never accused grieving parents of murdered children of being crisis actors."

Griswold's colleague, Sonny Bunch, writing for a competing publication, The Washington Post, sees it differently. "I can't support banning [Jones] from ostensibly content-neutral platforms, and those who refuse to see this as the first step toward a more aggressive campaign of de-platforming conservatives are being obtuse," he writes. "The math here is simple: There is a growing belief that speech can be considered violence, that racist speech is by definition violence and that conservative thought is inherently racist. I don't need a whiteboard or lizard people to connect the dots."

Meanwhile, my National Review colleague David French, a prominent First Amendment lawyer, recently argued in the New York Times that the solution is to give up the amorphous concept of "hate speech" and instead rely on the standards and norms of the First Amendment itself: Bar anybody who regularly engages in libelous or slanderous speech.

I like this proposal quite a bit. It would still be an editorial standard. YouTube, Facebook, et al. would still have to use their own judgment, but this standard is more transparent, empirical and objective: Is this person lying with malign intent?

But I have an additional suggestion: Stop pushing all of the decisions upward. These problems start with us.

In "Crisis of Responsibility," author David Bahnsen argues that too many Americans want someone else to make the hard decisions for them. The financial calamity of 2008 had many culprits, but one constituency that got off comparatively scot-free were the Americans who took out loans they couldn't afford and then walked away from their debts. Because the stigma against deadbeats has diminished -- or vanished -- we get more deadbeats.

The same thing is at work in the realms of journalism, politics and infotainment. Viewers (i.e., citizens) are all too eager to indulge dumb, nasty, cruel or nutty demagogues because they find such fare entertaining or psychologically comforting. Editors and television producers, hungry for clicks and eyeballs, are only too happy to invite people into their pages or onto their sets if they might bring those eyeballs and clicks with them.

Politically, we live in a popular-front moment, where no one on "our side" is worth criticizing too much, if at all, and everyone on "their side" is evil. This has as much to do with ratings and page views as it does with ideology. Moths chase light, but the incentive for politicians, producers and pundits is to follow the heat.

I'm still torn over how people such as Mark Zuckerberg should deal with slanderous carnival barkers like Alex Jones. But I'm convinced a lot of people are to blame for the problem reaching Zuckerberg's desk in the first place.