How Do You Solve a Problem Like North Korea?

Jonah Goldberg
|
Posted: Sep 01, 2017 12:01 AM
Share   Tweet
The opinions expressed by columnists are their own and do not necessarily represent the views of Townhall.com. 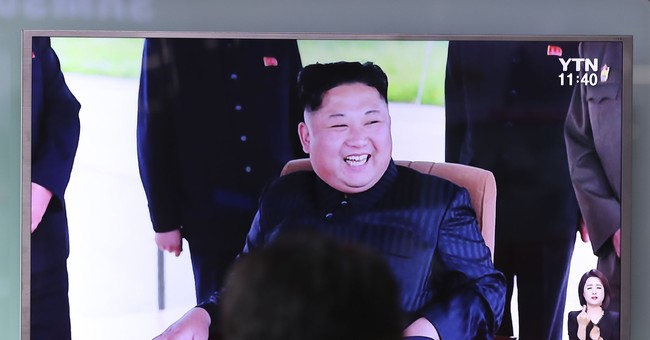 The first step in thinking through a problem is to ask whether it's a problem at all. Problems without solutions, the saying goes, aren't problems. They're facts.

Some people argue that a nuclear-armed North Korea is less of a problem and more of a fact. Murderous doughboy Kim Jong Un will never give up his nuclear toys. And let's face it: He would be stupid to. Perhaps the one true lesson of the last half-century of geopolitics is that the only way ambitious criminal regimes can protect themselves from outside threats is to have a nuclear deterrent. That was probably one of the last thoughts to go through Muammar Gadhafi's mind before the Libyan dictator was killed by a U.N.-backed mob.

Advocates of more "strategic patience" argue that we should just accept a nuclear-armed North Korea and rely on the time-tested policy of nuclear deterrence.

It's not a bad argument, but it has problems. Nuclear weapons have uses other than simply laying waste to cities. The chief one, as I already mentioned, is they take regime change off the table forever. Hence North Korea's primary demand: permanent recognition of the illegitimate regime's legitimacy.

Nukes also provide all manner of maneuvering room. For instance, Iran, another country with a horrible government, wants a nuclear arsenal very badly. While the Israelis are worried -- for understandable reasons -- that the Iranians might one day use it against Israel, that's not the only reason it would be bad for Iran to have the bomb. Iran wants to be a regional hegemon able to meddle far beyond its own borders. Having nukes makes that much easier because it raises the stakes of any military confrontation.

North Korea, the so-called Hermit Kingdom, does not have any territorial ambitions, nor is it much interested in interacting with the rest of the world. The regime's existence depends on keeping the population ignorant of just how terrible they have it compared with nearly every other country in the world.

But the North Korean regime is best understood as a monarchy that operates a criminal enterprise. It makes much of its money through counterfeiting, sex and drug trafficking, and numerous other schemes.

Among its biggest profit centers is extortion from the "international community." For 25 years it has been taking bribes to delay its nuclear program, as President Trump rightly noted on Twitter recently. And, obviously, the regime lied every time.

North Korea has also exported nuclear and missile technology to rogue nations such as Iran and Syria. Who really thinks that Kim will give up his business model?

If it were easy, the wisest course of policy would be to decapitate the North Korean regime. But that wouldn't be easy at all. A conventional war would be over relatively quickly -- so long as China stayed out of it -- but not quickly enough to prevent the destruction of South Korea's capital and the deaths of millions of people, including thousands of Americans.

Another widely discussed solution would be to induce China to overthrow the regime and install a puppet government. China could probably do it relatively easily. It surely has lots of North Korean generals on the payroll already.

But there are problems with this, too. China would demand a high price: total removal of American forces in South Korea and a tacit acknowledgement that China is the uncontested hegemon of the region. Such a "grand bargain would effectively transfer America's dominance to China," Hoover Institution scholar Michael Auslin writes in the Los Angeles Times. "No matter how the White House spun such a deal, world leaders would infer that the U.S. had gone hat in hand to China."

The impact on South Korean politics, never mind Japan's, would be tumultuous at best.

So what to do? Well, the first thing is to recognize that there are no good solutions. But perhaps the least bad option would be to openly declare that America already considers the North Korean regime to be China's puppet, and that North Korean misdeeds are really Chinese misdeeds.

That would come at a price, too. But it would incentivize China either to rein in the North Korean regime or, eventually, get rid of it.