Jonah Goldberg
|
Posted: Jun 07, 2017 12:01 AM
Share   Tweet
The opinions expressed by columnists are their own and do not necessarily represent the views of Townhall.com. 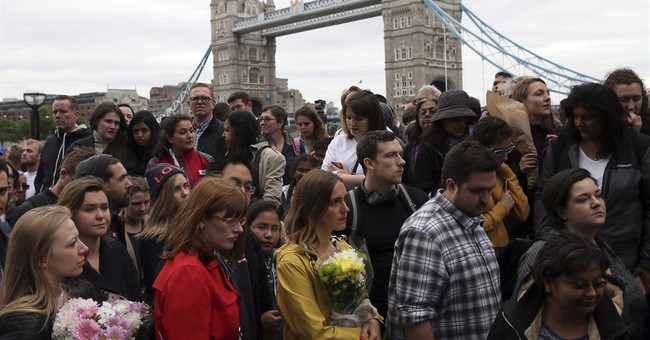 The saddest part about the recent terrorist attacks in the U.K. -- aside from the actual horror for the victims and their families, of course -- was that there was so little new to say about it.

But that didn't stop anyone. Everyone backed into their usual rhetorical corners, filling in the blanks on the familiar post-terror conversation like it was a game of Mad Libs, only none of the answers were particularly funny.

I, for one, could easily recycle one of umpteen columns on how the left's response is wrong and why we have to shed our dysfunctional aversion to speaking plainly about the nature of the threat and what is required to fight it. Or I could note that President Trump's response to the attack was less than helpful. But to what end? Who hasn't heard the arguments a thousand times already?

Watching cable news and surveying the algae blooms of "hot takes" on Twitter, it's hard to imagine anything will dramatically change. We are growing numb to the problem as it becomes part of the background noise of daily life. One of the attackers in London was even featured in a 2016 TV documentary titled "The Jihadi Next Door."

Contrast the reactions to the London attacks and to Trump's withdrawal from the Paris accord. A writer for The Nation spoke for many when he assured readers that "this is murder" and a "crime against humanity." No sane liberal condoned the terrorist attacks, but the condemnations seemed rote, while passion was reserved for admonishing those who made too big a deal of them or flirted with "Islamophobia."

In 2014, Jeremy Corbyn, who has a remote but possible chance of being the next British prime minister, argued that supporting the Islamic State is just another "political point of view" and that the government shouldn't put up "legal obstacles" to Islamic State fighters trying to return to England. This perspective hasn't cost him much with his admirers on the left, but I have to wonder what the reaction would be if he described climate change "denial" as just another political point of view.

But there I go, falling into the familiar trap of scoring ideological points rather than dealing with the larger truth. And what truth is that? Simply that we are in a rut when it comes to terrorism.

The Ariana Grande concert attack in Manchester did generate more than the usual passion because lots of pundits and policymakers, never mind television viewers, have teenage daughters they could imagine attending an event like that.

But did you hear about the bombing of a popular ice cream parlor in Baghdad last week? Families taking their kids there for a post-fast treat were blown to bits by the Islamic State.

A day later in Afghanistan, the Islamic State blew up a tanker truck in the diplomatic quarter of Kabul. That got some attention because of the brazenness of the attack, the death toll among Westerners, and because the explosion was really big.

But even these attacks will be forgotten, absorbed into the gray maw of "the way things are." Don't believe me? Do you remember the Paris terrorist attack that took place a month before the Manchester bombing? How about the Stockholm truck attack two weeks before that? The Saint Petersburg bombing four days prior? The Westminster Bridge attack in London in March? The machete attack at the Louvre in February? What about the horrible Christmas Market attack in Berlin? The assaults at Ohio State University; Hamburg, Germany; and Normandy, France? I think people still remember the truck attack that killed nearly 80 people in Nice last year.

Next week will be the first anniversary of the Orlando nightclub shooting. Many people will say, "Wow, has it been a year already?"

I suspect we'll stay in this rut reading from stale scripts for a good while. The hopeful scenario, I suppose, is that Islamic terrorism will eventually be ground down, after years or decades of attrition. Those who kept reminding us that more Americans die in bathtubs than from terrorism will consider this result a sort of vindication.

The alternative is that a dedicated group of attention-seeking murderers will react to the blase navel-gazing and self-absorption of the West by doing something so horrible that we will be shocked out of our torpor.