Jonah Goldberg
|
Posted: Oct 14, 2016 12:01 AM
Share   Tweet
The opinions expressed by columnists are their own and do not necessarily represent the views of Townhall.com. 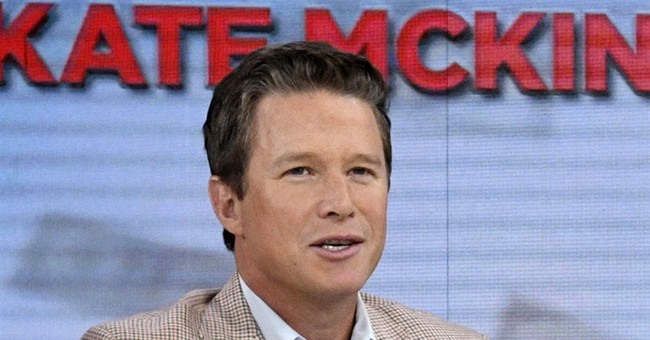 To say I care about Billy Bush's career is overly generous. If you'd asked me two weeks ago who he is, I doubt I could have given an answer beyond, "The name is familiar," or, "Isn't he on one of those shows?" And by "those shows," I mean that undifferentiated hog trough of "Access Hollywood," "Entertainment Tonight," "TMZ," "Inside Edition," etc.

But now, of course, I know who he is. He's the cousin of George W. Bush who's made a living in the worlds of infotainment, gossip, celebrity worship and distaff daytime "news," to be found in the crucial third hour of NBC's "Today." He smiles a lot, too.

Eleven years ago, he worked for "Access Hollywood," an aptly titled program that allows the hoi polloi to participate, at a distance, in the practice of what we will have to call "stellar fornication" for the benefit of the editors of family newspapers. He was assigned the task of interviewing Donald Trump on the cusp of Trump's cameo appearance on the soap opera "Days of Our Lives" in which the self-described "star" was slated to promote his reality show, "The Apprentice." A weighty affair indeed.

While sitting around on a bus, Bush giggled and guffawed as Trump told him: "You know I'm automatically attracted to beautiful [women]." In the realm of confessions, this is about as shocking as saying, "When I'm thirsty, I like to drink water." There's ample confirmation in the social-science literature that heterosexual men are instantly attracted to beautiful women. The only pertinent question is how men act on the attraction. According to Trump -- and a growing number of women -- he just starts kissing and groping, because he can get away with it.

But we've heard plenty about that already. What I find bizarre is that Bush has been suspended from his job at "Today" for ... what? I don't really know. Was he supposed to slap Trump? Rip off his mic and say, "How dare you, sir?" Report him to the police?

Maybe he should have. I certainly would think better of Bush if he had. But I have to assume that when you're in the business of sucking up to celebrities in a cutthroat competition for prized "gets," one must listen to -- and see -- all manner of things that would offend decent, middle-class sensibilities. Fortunately, professional stellar fornicators are screened for such encumbrances early in their careers.

When Trump added that he had made sexual overtures to Bush's then-colleague, Nancy O'Dell, Bush surely should have not only stopped giggling, but shown a scintilla of decency or even chivalry. (O'Dell has said she wants to be kept out of this story, condemning Trump's comments but declining to confirm or deny whether in fact Trump hit on her).

And that's what I think is worth pausing to ponder. Celebrities serve as a kind of secular aristocracy in our culture, getting away with behaviors we would not tolerate from anyone else. Barbra Streisand reportedly demands that her staff not look her in the eye. Sean Penn had an assistant swim the dangerous and fetid currents of New York's East River just to bring him a cigarette. Sylvester Stallone once stopped an interview until his hotel room was painted a more desirable color.

Sometimes the self-indulgence spills out of the category of mere arrogant eccentricity. Money alone doesn't account for what Bill Cosby is alleged to have done. British BBC "personality" Jimmy Savile sexually preyed on children for decades --and got away with it because he was just too "important" to be exposed.

Whether you believe some, none or all of the allegations against Donald Trump, the remarkable thing is that the only reason he's being held to account for them is that he dared descend from the constellation of stars into the terra firma of politics, where the rules are slightly different -- but only slightly (see: Clinton, William J.; Kennedy, John F.; et al.).

Billy Bush's career is merely collateral damage caused by Trump's wrenching migration. One can only imagine what repugnancies will remain unknown, so long as rock stars and rappers, actors, jocks, idols, divas and Hollywood doyennes stay in their royal chambers for us to worship from afar.