Jonah Goldberg
|
Posted: Sep 16, 2016 12:01 AM
Share   Tweet
The opinions expressed by columnists are their own and do not necessarily represent the views of Townhall.com. 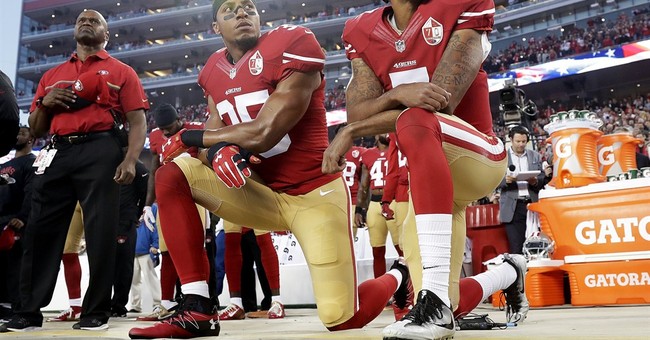 I've never been a sports fanatic. In fact, I'm the kind of guy a lot of sports obsessives can't stand. I tend not to pay attention to anything until the playoffs, and even then it's entertainment more than passion. This can be a disadvantage in real life because, particularly among men, sports talk is a kind of safe space and common tongue all at once.

I've seen it a million times in Washington, particularly in cable news green rooms. Two politicians or pundits who are diametrically opposed to each other ideologically manage to be friendly with each other solely because they can talk about the Nationals' roster or the Redskins' terrible coaching. I've also seen the same thing at airports, bars (and airport bars), in line at the DMV and in almost every other public space. Rich and poor, black and white, liberal and conservative, Southerner and Northerner: People from all walks of life can engage in friendly conversation about this widely shared cultural institution.

Other topics can play the same role, but none match the scale of sports.

I remember when ESPN hired Rush Limbaugh to be a football commentator in 2003. Limbaugh was clearly qualified on the merits, as far as I could tell. He's a talented broadcaster and knows a lot about football. But I thought it was a mistake, since Limbaugh is also a deeply polarizing figure. Moreover, I didn't think Limbaugh would be able to avoid applying his political views to sports. (I don't begrudge him that; I'd have a hard time biting my tongue too.) I was right. The famous controversialist said something controversial. What did ESPN expect?

I have no interest in revisiting the specific controversy. Rather, I bring up the episode because I remember reading a great column by the very liberal Washington Post writer E.J. Dionne. "The issue here is not that Limbaugh is a conservative," Dionne wrote. He didn't care about the personal politics of sports commentators.

No, Dionne's objection was with injecting politics into sports.

"Most of us who love sports want to forget about politics when we watch games," he wrote. "Sports, like so many other voluntary activities, creates connections across political lines."

And then he added: "Politicizing everything from literature to music to painting and sports was once a habit of the left. The Communist Party's now-defunct newspaper once had a sports column called 'Out in Left Field.' Now, it's the turn of the right to politicize everything."

I'm not sure that was entirely true then, but it's definitely not true now. For instance, San Francisco quarterback Colin Kaepernick has decided that he cannot stand for the National Anthem because America "oppresses black people and people of color. To me, this is bigger than football and it would be selfish on my part to look the other way."

He's gone on at tedious and sanctimonious length about the legitimate problem of police brutality and other Black Lives Matter talking points.

I think this is ludicrous on any number of fronts. Kaepernick isn't being asked to salute rogue cops, or even cops generally. He's being asked to show respect not just to the flag but to a nonpartisan custom. Instead he offers a blanket indictment of America itself and vows to hold his compliance hostage to his personal assessment of complicated social issues. That's not in a quarterback's job description any more than it is in a plumber's.

As Kaepernick's stunt has metastasized to other teams, the NFL has responded to this lugubrious moral preening and bravery-on-the-cheap with the same rubber-spined resolve we've come to expect from most large corporations. And it's not just happening in the NFL. As my National Review colleague David French has detailed, progressives are "weaponizing sports" all over the place, including in North Carolina, where the NCAA is boycotting the state over a disagreement about transgender issues.

My point is not that the issues athletes care about are illegitimate. Kaepernick is right that some issues are "bigger than football" -- but that is an argument for keeping them out of football! Religion is bigger than football too, which is why we try to keep it from intruding in public life in a divisive way.

Indeed, that's largely the point of America. This country was founded on the notion that politics should not govern every important issue in our lives. That is what liberty means, and that -- not police brutality -- is what the flag represents.

No wonder Kaepernick and his fans have such a problem with it.