The Left's Different Approach to Rights That It Opposes

Jonah Goldberg
|
Posted: Jul 01, 2016 12:00 AM
Share   Tweet
The opinions expressed by columnists are their own and do not necessarily represent the views of Townhall.com. 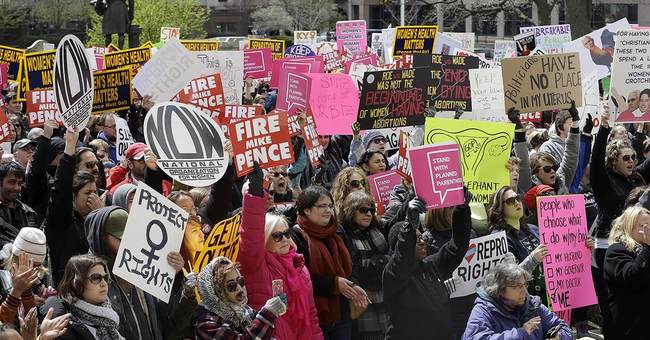 I have an idea.

The federal government needs to compile a list of women who shouldn't be allowed to get abortions. The criteria for getting on the list must be flexible. If an official at, say, the NIH or FBI think that a woman should be a mother for some reason or other, he or she can block an abortion. Maybe the woman has great genes or a high IQ or the sorts of financial resources we need in parents. Let's leave that decision where it belongs: in the hands of the government.

Heck, there's really no reason even to tell women if they're on the "no abort" list. Let them find out at the clinic. And if they go in for an abortion only to discover they are among the million or more people on the list, there will be no clear process for getting off it, even if it was a bureaucratic error or case of mistaken identity.

You probably don't think so, particularly if you took part in the celebratory riot of good feeling in the wake of the Supreme Court's recent decision striking down Texas abortion regulations. In the case of Whole Woman's Health v. Hellerstedt, the court ruled that Texas could not raise the required health and safety standards of abortion clinics to match those of other "ambulatory surgical centers." The reforms were implemented in the wake of the Kermit Gosnell scandal in which the Philadelphia abortionist's abattoir was revealed to be more like the setting for a "Saw" movie than a decent medical clinic.

The court held that abortion is such a fundamental constitutional right that minimal health standards are an "undue burden" on women seeking an abortion, even if they might save women's lives.

There's a deep and perplexing contradiction here. If abortion is just another aspect of "women's health" -- currently the preferred euphemism for the procedure -- why have higher health and safety regulations for dentists than abortionists?

But that's just the first of many contradictions. The court allowed Whole Women's Health to sue in the first place, even though the company has no right to an abortion, and third parties aren't supposed to have standing to sue for someone else's constitutional rights. The left loves to say "corporations aren't people" -- unless they're suing for abortion rights. Then the new mantra is: "Corporations are people, but human fetuses aren't."

The contradiction I find most glaring and galling is that the euphoric hysteria from the left over the court's decision occurred right in the middle of a conversation about guns and terrorist watch lists.

In that conversation, many of the same voices on the left argued that the federal government can -- nay, must! -- have the unilateral power to put American citizens on a secret list barring them from exercising two constitutional rights: the right to bear arms and the right to due process when the government denies you a right. (Both, unlike abortion, are rights spelled out in the Constitution). Congressional Democrats even staged a tawdry tantrum on the House floor about it.

Never mind that the Orlando slaughter -- the event that set off the House sit-in -- would not have been prevented if the Democrats had their way.

Writing for the majority in the Hellerstedt case, Justice Stephen Breyer argued that the Texas statute was unnecessary because "determined wrongdoers" like Gosnell wouldn't be deterred by new laws given that he was willing to violate existing laws.

Maybe so. But isn't that exactly the NRA's position on gun laws? Murderers, never mind terrorists, by definition don't care about the law.

It gets even crazier. President Obama, who hailed the court's decision, desperately craves the unilateral power to keep a list of people to whom he wants to deny guns without due process. But he also insists that known terrorists, particularly those held at Guantanamo Bay, have a constitutional right to due process (though presumably not to buy a gun).

Yes, there's a lot of deviltry in the details, but the basic truth is undeniable: Those on the left -- in all three branches of the federal government, along with their cheerleaders in the media -- believe that the rights they like are sacred and the rights they dislike are negligible inconveniences at best and outrageous cancers on the body politic at worst. As Justice Clarence Thomas put it in his Hellerstedt dissent: "The Court employs a different approach to rights that it favors."

In this, the court is not alone.