Jonah Goldberg
|
Posted: Jun 01, 2016 12:01 AM
Share   Tweet
The opinions expressed by columnists are their own and do not necessarily represent the views of Townhall.com. 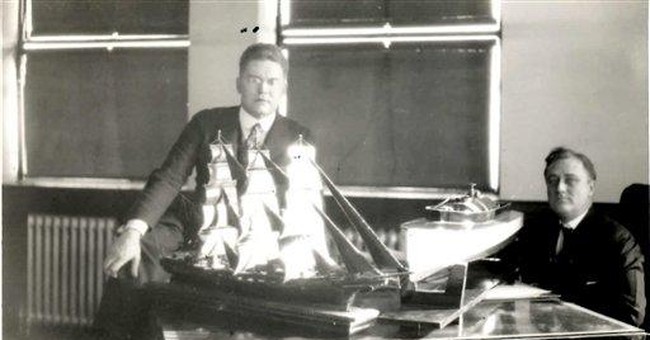 Perhaps it's time to bring back the American Liberty League.

Forgotten by everyone save a few history buffs, primarily on the libertarian right and the Marxist left, the League was formed early in Franklin Roosevelt's first term by John Jakob Raskob, a former head of the Democratic Party. Its leadership comprised mostly conservative small-government Democrats, including the party's two previous presidential nominees -- Al Smith, who ran in 1928 (the first major Catholic presidential candidate), and John Davis, who lost to Calvin Coolidge in 1924. It received considerable funding from some industrial titans, but it was also a legitimate grass-roots educational and political organization with more than 100,000 active members.

The League saw itself as a platform for constitutionalists and classical liberals who felt estranged from both Roosevelt's Democratic Party and Herbert Hoover's Republican Party.

That's right -- the Liberty Leaguers didn't even like Hoover. Contrary to a lot of myth-making, Herbert Hoover was not the heartless, laissez-faire, small-government bogeyman Democrats trot out to this day. He doubled federal spending in four years and was an ardent economic interventionist. As one FDR advisor put it, "When we all burst into Washington ... we found every essential idea [of the New Deal] enacted in the 100-day Congress in the Hoover administration itself."

Still, at the time, if you were a free-market constitutionalist, you could see how switching from Hoover to Roosevelt felt like falling out of the frying pan into the fire.

So in 1934 the group formed to stand up for ideas that had been called liberal for most of the preceding century. Its members weren't anarchists. In its literature, the League said it "thoroughly recognizes the obligations of our government to come to the relief of the men and women who are in distress through no fault of their own."

But they were passionate champions of economic liberty. "There is one very clear lesson to be learned from history -- namely, that governmental disregard for property rights soon leads to disregard for other rights," one of its pamphlets declared. "A bureaucracy or despotism that robs citizens of their property does not like to be haunted by its victims."

Alas, the League was a boon to FDR. With the press unabashedly on his side and the Depression still raging, it was easy to demonize the League as nothing more than malefactors of great wealth bent on protecting their privilege. The punch line at a Gridiron dinner in 1934: "If anybody's in favor of saving the Constitution, it's a sure sign he's got at least a million dollars."

FDR was less cheeky. "Give them their way and they will take the course of every autocracy of the past -- power for themselves, enslavement for the public."

The demonization campaign worked in the short term. But the League had some important long-term victories. It planted the seeds that would grow underground and blossom after the war. Diverse institutions such as the Club for Growth and the Federalist Society, Heritage Action, the Cato Institute, the American Enterprise Institute (where I'm a fellow), even the tea party can trace some of their DNA back to that effort.

"There seems no inherent obstacle," Arthur Schlesinger Jr. wrote in 1947, "to the gradual advance of socialism in the United States through a series of New Deals."

That was the plan. And it failed because conservatives and libertarians picked up the discarded weapons of the Liberty League and rejoined the war of ideas.

Donald Trump's victory in the Republican primaries, as well as socialist Bernie Sanders' lesser but very significant success at dragging the Democratic Party leftward, indicate that we may be in a 1930s moment again. Trump has made it eminently clear that his attachment to the Republican Party -- never mind conservative principles -- is entirely instrumental. He says he wants to turn the GOP into a "worker's party," which, even without the sinister connotations, suggests something much closer to New Dealism than traditional conservatism.

Americans interested in neither nationalism nor socialism are once more entering an era of political homelessness. Trump won partly because too few took him seriously for too long; the "movement" needs to get moving and make fresher arguments for timeless principles.