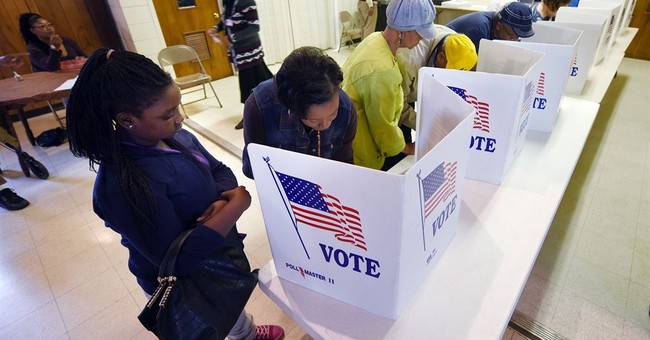 My old boss, William F. Buckley, often said liberals don't care what you do so long as it's compulsory (though he probably borrowed the line from his friend M. Stanton Evans).

There's probably no better illustration of this illiberal streak in liberalism than the idea of "compulsory voting." The argument usually goes like this: Voter turnout in America is low. Low voter turnout is bad. Therefore, we should make voting mandatory. (This argument is most popular after an election like last week's when things don't go so well for Democrats.)

When asked why low voter turnout is bad, one usually gets a mumbled verbal stew of Norman Rockwell-esque pieties about enhanced citizenship, reduced polarization and, on occasion, veiled suggestions that Washington would get its policies right -- or I should say left -- if everyone voted.

To call most of these arguments gobbledygook is a bit unfair -- to gobbledygook. First note that this logic can be applied to literally every good thing, from brushing your teeth to eating broccoli. Moreover, the notion that forcing people who don't care about politics to vote will make them more engaged and thoughtful citizens is ludicrous. We force juvenile delinquents (now called "justice-involved youth" by the Obama administration) and other petty criminals to clean up trash in parks and alongside highways. Is there any evidence this has made them more sincere environmentalists? If we gave every student in the country straight A's, that would make all the education trend lines look prettier, but it wouldn't actually improve education.

This sort of enforced egalitarianism is reminiscent of Kurt Vonnegut's short story "Harrison Bergeron," set in a society where everyone must be equal. Above-average athletes are hobbled to make them conform with the unathletic. The smart are made dumb. Ballet dancers are weighed down so they can't jump any higher than normal people. The prettier ones must wear masks.

Political scientist Nicholas Stephanopoulos recently penned an essay for The Atlantic skipping any requirement to explain why voting should be compulsory and going straight to his plan to implement an individual mandate to vote.

He begins, "Not enough people vote. It's a perennial source of concern in American politics." And with that, he's off to the races. His basic idea, which is quite plausible, is that if some very liberal cities required citizens to vote -- and because liberal governments are much more open to statist solutions -- the resulting boost in liberal voters would incentivize conservative politicians to force their constituents to vote, too. It's a fairly brilliant application of arms race logic to electoral politics.

One of the main reasons non-voters avoid the ballot box is that they just don't care enough to get informed. That's sad. But forcing them to vote won't change that. Indeed, it takes a twisted understanding of democracy to say that our politics will be greatly improved by getting more input from uninformed people.

For instance, many champions of compulsory voting say we should turn the ballot into a lottery ticket as well. Cast a vote, and you're automatically entered. By all means, let's empty the keno parlors on Election Day; that crowd really has a firm grasp on the nitty-gritty of public policy.

Even the ancient left-wing assumption that if we could politically activate the downtrodden masses of the poor and the oppressed to storm the polling stations, we might topple the supposed tyranny of privilege and inequality is wrong, too. The overwhelming consensus among political scientists who've looked at the question is that universal turnout would not change the results of national elections. It would, however, probably have a positive effect on local elections for school boards and municipal governments because these low-turnout elections are monopolized by entrenched bureaucrats and government unions (and that's the way they like it, by the way).

Of course, some analysts disagree. But that just shows that their real interest isn't in engaged citizenship but in getting the policies they want. You can be sure the only way this statist fantasy will ever truly die is if liberals always get their way under the existing system. If that happens, you can be sure we'll start hearing a lot more about how low-voter turnout is a good and wonderful thing.