Liberals Do Themselves No Favor by Denying Their Ideology 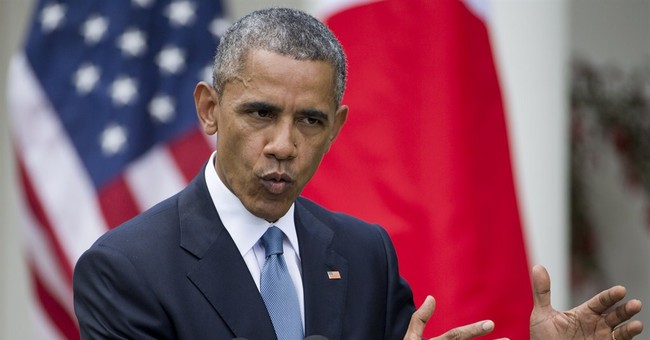 For the last 20 years, give or take another 50, one of the most cherished baubles of Beltway conventional wisdom has been that the Republican Party has moved too far to the right.

We'll come back to that in a moment.Another beloved trinket in the nest of notions that make up elite groupthink is that liberals not only haven't moved left, but they aren't even liberals at all. A week doesn't go by without Barack Obama insisting that he's merely a pragmatist and problem-solver, with nary an ideological ax to grind. Shortly after he was re-elected, Obama told David Gregory, then the host of "Meet the Press," the obvious takeaway of his presidency is that, "I'm not driven by some ideological agenda. I'm a pretty practical guy and I just want to make sure that things work."

A few weeks later, he gave the most ideologically left-wing State of the Union address of any president since FDR.

This is a pattern. For whatever reason, liberals feel compelled -- whether out of self-delusion or deliberate deception -- to lie about the fact that they are liberals. Consider The New Republic, once the flagship journal of American liberalism. When Facebook multimillionaire Chris Hughes took it over a couple years ago, he had bold plans (which have ended in near-complete failure).

In his mission statement Hughes proclaimed, "The journalism in these pages will strive to be free of party ideology or partisan bias." Whatever you may think of The New Republic these days, this was a ridiculous thing to say, and it's proven to be an even more vacuous fog of nonsense words since then. Indeed, in the very same issue, Hughes conducted a fawning and utterly partisan and ideological interview with Obama.
CARTOONS | AF Branco
View Cartoon

There's something almost Soviet in this compulsion to follow a party line so disconnected to the reality it allegedly describes.

Unfortunately, the vast majority of the Beltway establishment, particularly political journalists, believes these talking points, largely because they, too, are committed liberals who think they are mere non-ideological arbiters of the facts.

How strange the world must seem to them these days. Public opinion surveys show that Democratic voters have moved consistently to the left over the last two decades.

In 1994, according to the Pew Research Center, less than a third (30 percent) of Democrats described themselves as "mostly or consistently liberal." In 2014, a solid majority (56 percent) identified themselves as liberal.

Meanwhile, with the obvious exception of gay rights, the country simply hasn't moved left with the Democratic Party. In 2012, political scientist James Stimson found that the American public was more conservative than at any time since 1952.

This is one reason Obama's "what works" presidency hasn't worked for the Democrats. By committing to a left-wing agenda -- while pretending it's pragmatic -- the Democrats have been hollowed out in Congress and in state governments across the country. Obama had hoped to restore confidence in the competence of government. Instead, government's reputation is in tatters.

"By ignoring the electorate and steering the country in an unmistakably progressive direction his final two years in office," National Journal's Josh Krauhaar wrote in February, "he's ensuring that his presidency will be more of an eight-year mirage for liberals, rather than one known for winning lasting support for policies that would move the country in a leftward direction."

Poor Hillary Clinton. She spent the last 20-plus years trying to convince the country she wasn't as left-wing as people justifiably believed she was, and now she must risk whiplash as she veers to the left to reassure the base -- and to block a potential Elizabeth Warren run and a real presidential bid by avowed socialist Bernie Sanders. "She seems always to be zigging when history zags," writes the Washington Post's Chuck Lane.

Watching her pretend to be a populist is painful, like watching some of the joke contestants on "American Idol" tonelessly warble to a panel of snickering judges.

Now, it is certainly true that Republicans are not without their problems. They desperately need coaching on how to talk about issues in a way that doesn't alienate voters. But one of the reasons they need tutoring in this regard is that the press which reports on their campaigns is even more out of touch with reality than the allegedly out-of-touch Republicans they opine on.

If someone nods along when Obama ludicrously claims to have no ideological agenda, it's no surprise he'll shake his head when a conservative admits to having one. But at least the conservatives aren't lying.