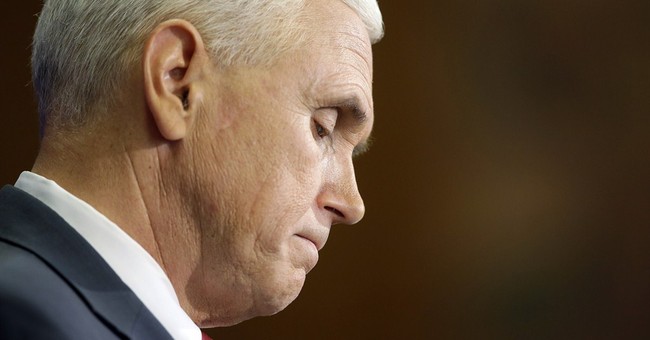 "I could have handled that better."

I don't know if the captain of the Titanic ever said that. But Mike Pence did on Tuesday.

The Indiana governor has managed to step on an impressive number of parts of his own anatomy recently and in the process gravely injured what was already a long-shot ambition to run for president in 2016.

Earlier this month he signed the Religious Freedom and Restoration Act in a private ceremony. In attendance were prominent opponents of gay marriage.

In response, great algae plumes of righteous outrage erupted across the Internet. Gay rights groups, the Democratic Party and the mainstream media, in unison, lost their collective marbles and raised unshirted hell. Know-nothings of every stripe cried out that Jim Crow had returned to the land. Shouts of "boycott!" went forth, including perhaps of the NCAA's Final Four, which for Hoosiers is like threatening a boycott of Easter Mass at the Vatican. The Indiana Chamber of Commerce hied to its corporate fainting couch and begged to be rescued.

Pence, desperate to put out the political fire, raced to a TV studio last Sunday to quench the flames on ABC's "This Week." The only problem is that he arrived at the scene with a rhetorical water pistol hoping to put out a five-alarm blaze.

"Do you think it should be legal in the state of Indiana to discriminate against gays or lesbians?" George Stephanopoulos asked.

"George, you're -- you're following the mantra of the last week online [media coverage]," Pence said. "And you're trying to make this issue about something else."

Well, as they say in formal debate classes, Duh.

Two days later, Pence held a press conference to ask the state legislature to rewrite the law to placate the mob.

The federal RFRA was passed in 1993, in response to a Supreme Court decision holding that Native Americans weren't exempt from anti-drug laws barring the use of peyote, even for religious ceremonies.

In response, Congress passed a law barring the government from putting a burden on religious practice without a compelling state interest. If someone feels their religious rights have been violated, they can go to court and make their case. That's it. Jim Crow laws forced people to discriminate. RFRA doesn't force anybody to do anything.

The original RFRA was a good and just law championed by then-Rep. Chuck Schumer and opposed by right-wing bogeyman Jesse Helms. It passed the Senate 97-3 and was signed by President Bill Clinton.

In 1997, the Supreme Court held that RFRA was too broad and could not be applied to states. So, various state governments passed their own versions. Twenty states have close to the same version as the federal government's, and a dozen more have similar rules in their constitutions. These states include such anti-gay bastions as Connecticut, Massachusetts and Illinois, where, as a state senator, Barack Obama voted in favor of the law.

The law says nothing about gays and was most famously used to keep the Obama administration from forcing Hobby Lobby and nuns from paying for certain kinds of abortion-inducing birth control.

"This big gay freak-out is purely notional," according to legal writer Gabriel Malor (who is gay). "No RFRA has ever been used successfully to defend anti-gay discrimination, not in 20 years of RFRAs nationwide."

Still, the freak-out was predictable. A year earlier in Arizona, Gov. Jan Brewer had attempted to sign a similar law before caving to the pressure. Why would the same crowd spare Indiana?

Yes, Pence hoped to throw a crumb to opponents of gay marriage. But what a miniscule crumb this is.

The war for gay rights has been won, and that's basically fine by me. But there are a few holdouts -- most famously devout Christian wedding planners, florists photographers and bakers -- who don't want to be part of such things. Why a gay couple would want a photographer who is morally opposed to their wedding to snap pictures of it is a mystery to me.

But we live in an age where non-compliance with the left's agenda must be cast as bigotry. Everyone is free to celebrate as instructed. This is what liberals think liberty means today.