Ringing Out The Year With Liberal Double Standards 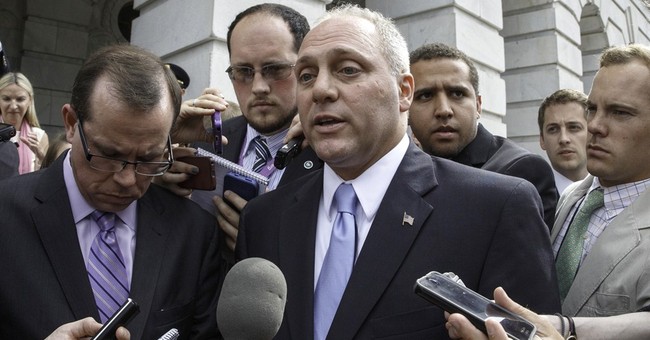 Many conservatives finished the year angry about the same thing they were angry about at the beginning of the year: liberal double standards.

As I write this, GOP House Whip Steve Scalise is in hot water over reports that he spoke to a group of racist poltroons in Louisiana 12 years ago. Whether it was an honest mistake, as Scalise plausibly claims, or a sign of something more nefarious, as his detractors hope, remains to be seen.

But one common response on social media is instructive. Countless conservatives want to know: Why the double standard? Barack Obama was friends with a domestic terrorist, Bill Ayers. His spiritual mentor was a vitriolic racist, Jeremiah Wright. One of his administration's closest advisers and allies is Al Sharpton, a man who has inspired enough racial violence to make a grand dragon's white sheets turn green with envy.

Meanwhile, the Democratic Party venerated the late Sen. Robert Byrd, a former Klansmen himself. He was one of 19 senators (all Democrats) to sign the Southern Manifesto opposing integration. One of his co-signers was William Fulbright, Bill Clinton's mentor.

Peaceful, law-abiding tea party groups who cleaned up after their protests -- and got legal permits for them -- were signs of nascent fascism lurking in the American soul. Violent, anarchic and illegal protests by Occupy Wall Street a few years ago or, more recently, in Ferguson, Missouri, were proof that a new idealistic generation was renewing its commitment to idealism.

When rich conservatives give money to Republicans, it is a sign that the whole system has been corrupted by fat cats. When it is revealed that liberal billionaires and left-wing super PACs outspent conservative groups in 2014: crickets.

When Republicans invoke God or religious faith as an inspiration for their political views, it's threatening and creepy. When Democrats do it, it's a sign they believe in social justice.

One can do this all day long. But while examples are easy, explanations are hard.

I don't know who first said, "Behind every apparent double standard lies an unconfessed single standard" (and as far as I can tell, neither does the Internet), but whoever did was onto something.

What looks like inexplicably staggering hypocrisy from the conservative perspective is actually remarkably consistent from the liberal perspective.

Well, "perspective" is probably the wrong word because it implies a conscious, deliberate, philosophical point of view. What is really at work is better understood as bias, even bigotry.

If you work from the dogmatic assumption that liberalism is morally infallible and that liberals are, by definition, pitted against sinister and -- more importantly -- powerful forces, then it's easy to explain away what seem like double standards. Any lapse, error or transgression by conservatives is evidence of their real nature, while similar lapses, errors and transgressions by liberals are trivial when balanced against the fact that their hearts are in the right place.

Despite controlling the commanding heights of the culture -- journalism, Hollywood, the arts, academia and vast swaths of the corporate America they denounce -- liberals have convinced themselves they are pitted against deeply entrenched powerful forces and that being a liberal is somehow brave. Obama, the twice-elected president of the United States, to this day speaks as if he's some kind of underdog.

Frank Rich, the former New York Times columnist and theater critic, recently interviewed Chris Rock for New York Magazine. He wanted to know why right-leaning comedian Dennis Miller isn't as funny (at least according to Rich) as Jon Stewart of "The Daily Show." He asked Rock, "Do you think that identifying with those in power is an impediment to laughter?"

It was a hilarious and revealing moment. Stewart -- who recently had to turn down a pleading request from NBC to take over "Meet the Press" -- has long identified with liberals in power. Moreover, he's easily one of America's most powerful liberals, routinely creating and enforcing liberal conventional wisdom (much as Rich had done from his perch at the Times). Miller, meanwhile, has nowhere near the same cultural clout precisely because he doesn't affirm the single standard at the heart of liberalism: "We're the good guys."