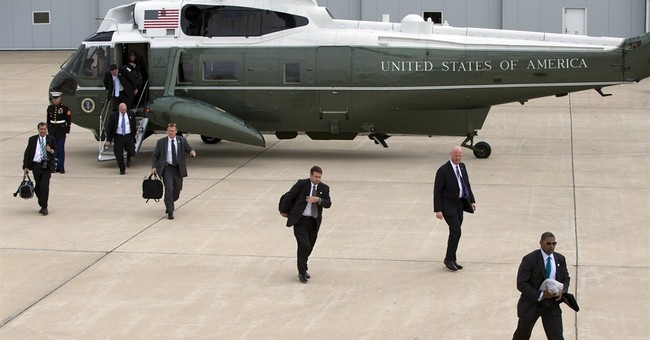 In news that must have left my friends at the New York Post -- never mind the gang at "The Daily Show" -- with a renewed confidence that ours is a just and beneficent God, the White House has been caught covering up a scandal involving a Cartagena hooker.

The phrase "Cartagena hooker" alone is a mellifluous gift to ink-stained wretches everywhere, but the revelation that the White House reassigned the alleged client of the aforementioned Andean call girl to the State Department's office of "Global Women's Issues" is the sort of flourish Tom Wolfe or Chris Buckley wouldn't dare attempt as satire.

Let us back up for a moment. Two years ago, the Secret Service was humiliated in a terrible scandal. Agents sent to prepare for a presidential trip to Colombia availed themselves of the local service industry, as it were. The local cops were called in when one agent refused to compensate a woman for services rendered, contradicting ancient advice about the oldest profession: You don't pay for the sex; you pay for the hooker to leave. Hats off to the Cartagena constabulary for their diligence in enforcing contract rights. Ten agents lost their jobs.

"Nevertheless," Carney said, "out of due diligence, the White House Counsel's office has conducted a review ... (and) came to the conclusion that there's no indication that any member of the White House advance team engaged in any improper conduct or behavior."

If the Washington Post's exhaustive exclusive this week is to believed, that was what experts would call a lie. Secret Service investigators told the White House that Jonathan Dach also had too good a time in Cartagena. Dach, then a Yale law student, was a volunteer for the White House advance team. The lead investigator for the Department of Homeland Security -- which oversees the Secret Service -- says he was told "to withhold and alter certain information in the report of investigation because it was potentially embarrassing to the administration."

One such piece of information was that Dach "was not charged for additional guest as a benefit of Hilton Honor Member."

Membership has its privileges.

That guest, investigators found, had advertised herself as a prostitute on the Internet, complete with a photo of herself scantily clad in front of signs that read, "Summit of the Americas." Perhaps she was just a student of international diplomacy specializing in ameliorating the deficiencies of soft power?

The lead investigator and two of his aides say they were put on administrative leave when they questioned what they believed to be a naked political cover-up.

If the allegations are true, we're left with this question: Why did the White House go to such lengths to conceal the event? Dach broke no laws in Cartagena, the alleged tryst took place in a so-called "tolerance zone" where prostitution is legal. Surely the White House isn't against tolerance.

There are two likely answers. The first is obvious and laid out in the Post's reporting. The White House didn't want a scandal in an election year. The second answer, also suggested by the report, is that while Dach was an inconsequential gnome in the White House's massive political operation, Dach's father, Leslie, was a big donor to the Obama campaign. A former lobbyist for Wal-Mart, Leslie Dach gave $23,900 in 2008 and worked with Michelle Obama's "Let's Move!" campaign.

Neither answer excludes the other, and both speak volumes about this White House's problems. The underlying scandal is fairly minor. But if the White House would falsify records and lie to the public about this, is it really so hard to imagine that it would deceive the public -- and Congress -- about larger issues like, say, Benghazi? (Just this week, former Obama Secretary of Defense Leon Panetta told Fox News' Bill O'Reilly that the infamous White House talking points on the attack were essentially bogus.)

But it also speaks to the seedy way Obama talks about politics generally. The president loves to denounce a cynical system where politics comes before the public good. He rails about a system where fat cats live by a different set of rules than the little guy, and money buys special treatment and access. But the way he operates runs completely counter to all that. Which is why the only person to come out of this scandal in an honorable light is the Cartagena hooker.