Liberal Students Have a Funny Definition of 'Diversity' 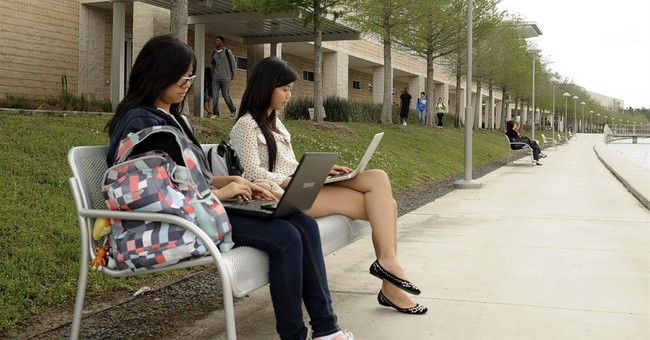 Cancel the philosophy courses, people. Oh, and we're going to be shuttering the political science, religion and pre-law departments too. We'll keep some of the English and history folks on for a while longer, but they should probably keep their resumes handy.

Because, you see, they are of no use anymore. We have the answers to the big questions, so why keep pretending there's anything left to discuss?

At least that's where Erin Ching, a student at Swarthmore College, seems to be coming down. Her school invited a famous left-wing Princeton professor, Cornel West, and a famous right-wing Princeton professor, Robert George, to have a debate. The two men are friends, and by all accounts they had an utterly civil exchange of ideas. But that only made the whole thing even more outrageous.

"What really bothered me is, the whole idea is that at a liberal arts college, we need to be hearing a diversity of opinion," Ching told the Daily Gazette, the school's newspaper. "I don't think we should be tolerating [George's] conservative views because that dominant culture embeds these deep inequalities in our society."

Swarthmore must be so proud.

Over at Harvard, another young lady has similar views. Harvard Crimson editorial writer Sandra Y.L. Korn recently called for getting rid of academic freedom in favor of something called "academic justice."

"If our university community opposes racism, sexism and heterosexism, why should we put up with research that counters our goals simply in the name of 'academic freedom'?" Korn asks.

Helpfully, she answers her own question: "When an academic community observes research promoting or justifying oppression, it should ensure that this research does not continue."

One could easily dismiss these students as part of that long and glorious American tradition of smart young people saying stupid things. As Oscar Wilde remarked, "In America the young are always ready to give to those who are older than themselves the full benefits of their inexperience."

But we all know that this nonsense didn't spring ex nihilo from their imaginations. As Allan Bloom showed a quarter century ago in "The Closing of the American Mind," these ideas are taught.

Indeed, we are now up to our knees in this Orwellian bilge. Diversity means conformity.

Let me invoke personal privilege by citing a slightly dated example. When the Los Angeles Times picked me up as a columnist in 2005, Barbra Streisand publicly canceled her subscription in protest (I'm proud to say). You see, Streisand's friend, iconic left-wing columnist Robert Scheer, had been let go. And I was one of the new columnists brought on board. This was an outrage.

"The greater Southern California community is one that not only proudly embraces its diversity, but demands it," Streisand wrote to the Times in a syntactically impaired rant that read a bit like one of those letters I occasionally get from prison inmates who've memorized words from a thesaurus without fully understanding what they mean. "Your publisher's decision to fire Robert Scheer is a great disservice to the spirit of our community. ... So although the number of contributors to your op-ed pages may have increased, in firing Robert Sheer [sic] and putting Jonah Goldberg in his place, the gamut of voices has undeniably been diluted. ..."

Nearly a decade later, I still don't know what it means to dilute a gamut of voices. But I do know what she meant by "diversity." It means: "people who agree with me." It's lazy and insipid shorthand for "left wing." After all, by the normal metrics of identity politics -- race, religion, gender -- Scheer and I are largely interchangeable. Where we differ is ideology. And ideological diversity is the only kind of diversity the left finds offensive.

Which brings us back to the sages of Swarthmore and Harvard. They at least understand that ideological diversity is actually, like, you know, a thing. They just think it's a bad thing.

More pernicious, however, is that they believe the question of justice is a settled matter. We know what justice is, so why let serious people debate it anymore? The millennia-old dialogue between Aristotle, Plato, St. Augustine, Aquinas, Machiavelli, Rawls, Rorty, Hayek et al.? Shut it down, people. Or at least if the conversation heads in a direction where the Korns, Chings and Streisands smell "oppression" -- as defined solely by the left -- then it must not be "put up with." Diversity demands that diversity of opinion not be tolerated anymore.