Hail to The Panderer in Chief 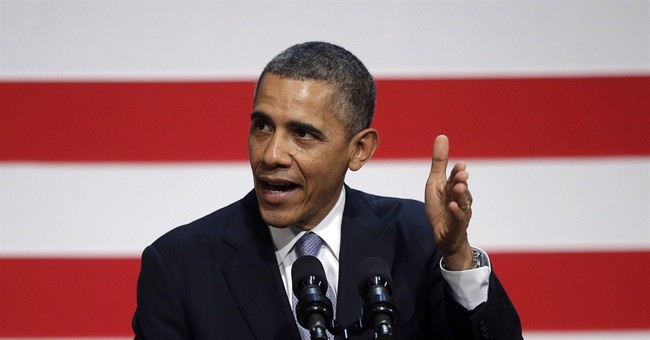 "I'm not a particularly ideological person," President Obama told an audience of donors in Seattle over the weekend. He added (in Reuters' words) that "pragmatism was necessary to advance the values that were important to him."

This is an old refrain of Obama's. As he said in his first inaugural, "The question we ask today is not whether our government is too big or too small, but whether it works."

"What works" is a cruel standard for the author of Obamacare, which may be one reason the White House has taken to scrubbing the sobriquet from its website and the president's speeches in favor of the law's official name, the Affordable Care Act.

I'm tempted just to bang my spoon on my high chair about the ridiculous notion that Obama isn't "ideological." But I've been doing that for so long, there are spoon-shaped divots in my tray. The president is a committed ideological liberal, and that's fine. He's just not honest about it.

In their new book "Double Down," Mark Halperin and John Heilemann recount the president's frustration with his inability to deliver on his ideological convictions. In the fall of 2011, the president was getting exhausted with his constant pandering to political necessity.

"All too often, Obama felt as if he were driving with his foot on the brake," they write.

At a strategy meeting, the issue of climate change came up. The book quotes an exasperated Obama declaring: "Maybe I should just come out and say what I really feel about this. Maybe I should just go out and say what I think about everything." At a follow-up meeting, he brought a long list of priorities he wanted to be more bold on, from poverty to gay marriage to alternative energy.

"Taken in sum, Obama's list was a revealing document," write the authors. "He believed that over the past three years his progressive impulses had too often been trumped by the demands of pragmatism. That he had trimmed his sails in just the way his critics on the left had charged."

When then-White House Chief of Staff William Daley saw the list, his reaction was awfully pragmatic: "[Expletive deleted.] We have a bunch of leakers here. I hope to God this doesn't get out."

Of course, when Obama says he's a pragmatist, he doesn't mean the sort of pragmatism that Halperin and Heilemann are referring to: a willingness to pander cravenly to the voters while hiding his core convictions. The president means to suggest that his policies are simply the only right and smart way to achieve good things. That's why he's so fond of saying -- and so hypocritical for saying it -- that his opponents are ideologues who can't "put politics aside" to do what's right.

This is an ancient pose for progressives who insist that governing is a science. There's no right-wing or left-wing way to build a bridge, only the best way. So it is with government too.

As the New Republic's Franklin Foer notes, this fiction was always partly intended to sell voters on the idea that progressive social planners could be trusted with unprecedented state power. "It was more comforting for people to feel as if disinterested technicians, not party hacks, were going to be running the show."

The irony for Obama is that he's great at playing the role of disinterested technician, but he's anything but one in real life. He can talk a great game about providing a website that works like Kayak or Amazon, but he's embarrassingly out of his depth when it comes to delivering one.

More substantively, as John Harwood writes in the New York Times, one of the reasons Obamacare has become so problematic is that the president sold it as a nonideological project that would create winners all around; that was an example of the sort of pragmatic pandering Heilemann and Halperin are writing about.

But such pandering couldn't hide the fact that the actual program enshrines in law any number of ideological imperatives that must, of necessity, create legions of losers. That was inevitable given the redistributive nature of the law.

But the president would be in much better shape today if he could have been honest about it.