The Grand Myth of Live-And-Let-Live Liberalism 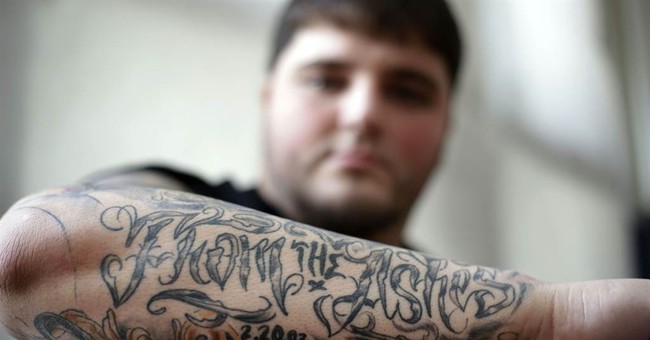 In Washington, D.C., the city's department of health wants to subject people seeking a tattoo or body piercing to a mandatory 24-hour waiting period before they can go through with it. That's just one of the regulations in a 66-page proposal of new rules for the tattoo and piercing industry.

Reasonable people may differ on the wisdom of these proposals, but as someone whose interest in such establishments begins and ends with keeping my daughter away from them, I can't get too worked up either way, save to say D.C. has bigger problems to worry about.

What did catch my eye was this line from the write-up in the metro section of the Washington Post: "The body art rules are the latest product of a city government that has occasionally struggled to reconcile its socially liberal sensibilities with a zeal for regulation."

There is a notion out there that being "socially liberal" means you're a libertarian at heart, a live-and-let-live sort of person who says "whatever floats your boat" a lot.

Alleged proof for this amusing myth (or pernicious lie, take your pick) comes in the form of liberal support for gay marriage and abortion rights, and opposition to a few things that smack of what some people call "traditional values."

The evidence disproving this adorable story of live-and-let-live liberalism comes in the form of pretty much everything else liberals say, do and believe.

Social liberalism is the foremost, predominant and in many instances sole impulse for zealous regulation in this country, particularly in big cities. I love it when liberals complain about a ridiculous bit of PC nanny-statism coming out of New York, L.A., Chicago, D.C., Seattle, etc. -- "What will they do next?"

Uh, sorry to tell you, but you are "they." Outside of a "Law and Order" script -- or an equally implausible MSNBC diatribe about who ruined Detroit -- conservatives have as much influence on big-city liberalism as the Knights of Malta.

Seriously, who else do people think are behind efforts to ban big sodas or sue hairdressers for charging women more than men? Who harasses little kids for making toy guns out of sticks, pop tarts or their own fingers? Who wants to regulate the air you breathe? The food you eat and the beverages you drink? Who wants to control your thermostat? Take your guns? Your cigarettes? Heck, your candy cigarettes? Who's in favor of speech codes on campuses and "hate crime" laws everywhere? Who's in favor of free speech when it comes to taxpayer-subsidized "art" and pornography (so long as you use a condom, if liberals get their way) but then bangs their spoons on their high chairs for strict regulations when it comes to political speech? Who loves meddling, finger-wagging billionaires like Michael Bloomberg when they use state power and taxpayer money to herd, bully and nudge people but thinks billionaires like the Koch brothers who want to shrink government are the root of all tyranny?

At the national level, who bypassed Congress to empower the EPA to regulate the atmosphere? Oh, and who pushed Obamacare on a country that didn't want it? Who defends bending the entire country -- including religious institutions -- into a national health-care scheme dedicated to the proposition of live and let live so long as you live the way the Department of Health and Human Services says you should?

Did legislative and bureaucratic gremlins sneak into government buildings at night and pass all of these rules and regulations while the social-liberal free-thinkers were off not judging people and refusing to harsh anybody's mellow?

Sure, today's liberalism does carry within it some genetic lineage to the classical liberalism -- i.e., libertarianism -- of J.S. Mill and John Locke. But genetic ties are overrated. After all, humans share half of our genes with bananas. (Look it up.)

Social liberalism -- better understood as progressivism -- is a worldview that seeks to use the state to support its preferred values and culture. That isn't libertarianism. Support for abortion rights does not make you a libertarian; it makes you someone who wants very lax regulations on abortion for ideological reasons. Which is why socially liberal bureaucrats in D.C. want to make you wait 24 hours to get a tattoo of a baby on your arm, but there's no waiting to have an abortion.