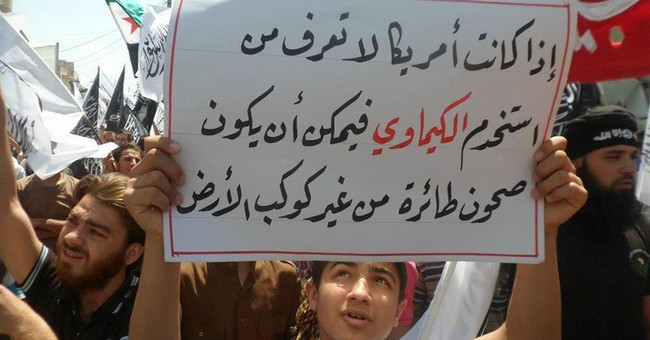 If there was a moment when the United States could have productively intervened in Syria, it looks like that moment has passed.

Shiite militants, including Hezbollah -- partly at the behest of their paymasters in Iran -- are racing to the defense of Bashar Assad's regime. According to a witness account in the New York Times, there were some 11,000 Hezbollah fighters in the besieged town of Qusair alone.

A Shiite religious student in Najaf, Iraq, told the Times that his colleagues believe the leader of Qatar, a backer of Sunni Syrian rebels, is a long-prophesied demonic figure who, it is foretold, will raise an army in Syria to wipe out Shiites in Iraq. As a result, devout Shiites are racing to defend their faith.

Sunnis around the world, meanwhile, are being called on to join the conflict, with the material support of Saudi Arabia and Qatar. The Sunni Muslim Scholars Association of Lebanon issued a fatwa calling on followers to support the rebels "by words, money, medical aid and fighting."

The hugely influential Sheik Yusuf Qaradawi, a Sunni Egyptian cleric based in Qatar, called on Sunnis everywhere to come to Qusair's aid and proclaimed Hezbollah "more infidel than Jews and Christians."

It's tempting to compare what is going on in Syria to the Spanish Civil War, a conflict that presaged World War II in many ways, chief among them the way fascists and communists used the belligerents as proxies for the larger conflict brewing in Europe.

The Assad regime, essentially a puppet of Shiite Iran, is a devil we know well. However much the rebellion began as a nonsectarian protest against Assad's corruption, it is now rapidly becoming dominated by al-Qaeda and other radical and terrorist forces. One such rebel group has reportedly been involved in the slaughter of Christians -- not the kind of crowd many Americans have an interest in supporting.

But beyond the bad guys versus bad guys aspect, the Spanish Civil War analogy has its limits. A better comparison may be to the bloody upheavals that tore apart Europe in the wake of the Protestant Reformation.

Christianity benefits from dogmas and doctrines more conducive to the separation of church and state than those found in Islam, starting with Jesus' injunction to render unto Caesar what is Caesar's. When the Roman Empire fell, the seat of political authority transferred to Constantinople, but the religious authority remained in Rome. This created room, conceptually at least, to distinguish political authority from religious authority. But the divine right of kings rendered that distinction operationally moot for centuries.

It wasn't until the bloody religious wars between Catholics and Protestants -- as well as different denominations of Protestantism -- had exhausted much of the continent that Europeans came to recognize "the essential futility of putting the beliefs of the mind to the judgment of the sword," in the words of historian C.V. Wedgwood.

In short, the tradition of religious tolerance we take for granted today was paid for with generations of bloodshed.

Several centuries of war and religious persecution may not seem all that heartening a precedent. But things move much, much faster now. For instance, it took the West several millenniums to learn how to lift its people out of poverty. The rest of the world leapfrogged countless intermediate steps by learning the West's lessons.

Between 1981 and 2001, for example, China alone lifted 680 million out people of poverty when it accepted the basic wisdom of markets. It came to that lesson only after it exhausted itself testing the barbaric limits of communism, killing tens of millions of its own people trying to make an unworkable theory work.

Edmund Burke was right when he said, "Example is the school of mankind, and they will learn at no other." What is happening in the Middle East is a horror. But some lessons can only be learned after exhausting the worse alternatives first.

There may yet be a role for America to minimize the horror. But a lasting solution can only be found when the people on the ground are ready and willing to take it to heart.