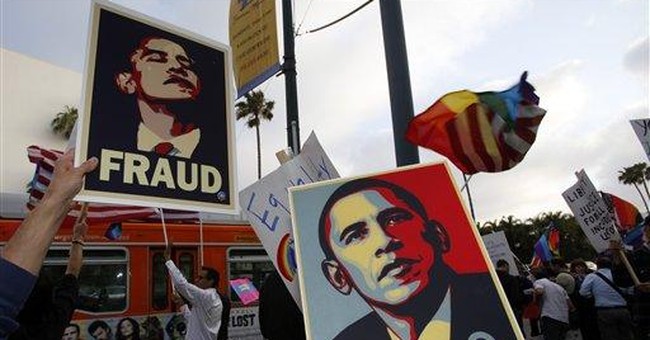 In 1995, Barack Obama released "Dreams From My Father," a compelling memoir full of stories about his life that -- though often not exactly true -- persuaded many people that this young man had a great political future ahead of him.

Nearly a decade later, Obama introduced himself to the country with a stirring speech at the 2004 Democratic convention in which he conceded, "I stand here knowing that my story is part of the larger American story ... and that in no other country on Earth is my story even possible."

"Even as we speak," Obama declared as he strode the high road at takeoff velocity, "there are those who are preparing to divide us, the spin masters and negative ad peddlers who embrace the politics of anything goes."

"Well, I say to them tonight, there's not a liberal America and a conservative America; there's the United States of America." He insisted that we stop listening to the "pundits" who divide the country into red and blue states.

"I've got news for them, too." Obama thundered. "We worship an awesome God in the blue states, and we don't like federal agents poking around our libraries in the red states."

Obama's rhetoric soared high, despite the ballast of straw men clinging to his sentences like desperate souls clinging to the struts of an American helicopter leaving Saigon. (What federal agents, pray tell, poked around our libraries?)

Four years later, Obama ran for president as a "change" candidate championing the transformative power of words. In the Democratic primary, he announced that his true opponent was "cynicism" itself. Apparently, to oppose Obama's candidacy for any reason was to give in to dark motivations. Later, he explained that Democratic voters who preferred Hillary Clinton were "clinging" to their bigotries and small-mindedness. As ever, his candidacy did not bear close inspection, but it's hard to inspect something at such an altitude. Besides, as ever, he told a good story.

Indeed, as Obama told Newsweek reporter Richard Wolff, "You know, I actually believe my own bull----."

No doubt he believed it, in April 2008, when he assured voters, "We're not going to run around doing negative ads. We're going to keep it positive, we're going to talk about the issues." By July 2008, Obama was saying that the $4 trillion increase in national debt during the eight years of George W. Bush's presidency was "unpatriotic."

And by September 2008, his campaign was running ads ridiculing his opponent, Sen. John McCain, because he couldn't send an email. Never mind that McCain's inability had nothing to do with technological ineptitude and everything to with the war hero having been so brutally beaten by the Viet Cong that he physically couldn't use a keyboard. His wife would read his emails to him.

Some say President Obama has been a smashing success, achieving everything he promised to do. He himself told "60 Minutes" in December that his domestic and foreign-policy accomplishments exceeded those of any president "with the possible exceptions of Johnson, FDR and Lincoln."

Others claim President Obama was stymied at every turn by an obstructionist Congress that wanted him to fail. Interestingly, both stories can be heard coming out of the president's own mouth on any given day.

But last month he added a new twist to his tale. He told CBS News that "the mistake of my first term -- couple of years -- was thinking that this job was just about getting the policy right." What Obama forgot to do was "to tell a story to the American people."

What a curious thing to say, particularly for such a storyteller. It amounts to: "I did everything right, but the public can't see it without a story.

By the way, if amassing $4 trillion in debt over eight years is "unpatriotic," how does racking up $5 trillion more in four years add up to "getting the policy right"?

And what was he focusing on? It's an uncontroversial observation inside the Beltway that Obama farmed out the stimulus and health care to congressional Democrats. What was he doing if not telling stories about green-energy magic and invisible recovery summers?

Just in the last few weeks, the Obama campaign or its surrogates have accused (either directly or by insinuation) his opponent -- I mean Mitt Romney, not "cynicism" -- of hastening a cancer death, being a tax cheat, and wanting to put black people in chains and give children E. coli.

But fear not. If you don't like those stories, the president has more. He's always got more stories. And he actually believes them, too.