Pick an Excuse, Any Excuse 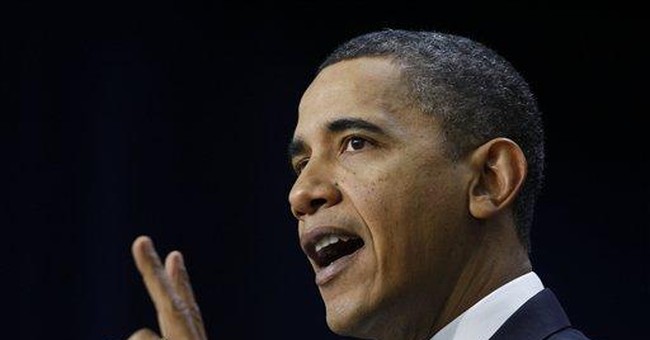 Remember that great scene from the Oscar-robbed classic "The Blues Brothers"? Jake and Elwood (John Belushi and Dan Akroyd) are finally cornered by Jake's former fiancée (Carrie Fisher). Jake left her at the altar with 300 guests and the best Romanian caterers in the state waiting.

"You betrayed me!" she exclaims.

"No I didn't. Honest," Jake explains. "I ran out of gas. I, I had a flat tire. I didn't have enough money for cab fare. My tux didn't come back from the cleaners. An old friend came in from out of town. Someone stole my car. There was an earthquake! A terrible flood! Locusts! IT WASN'T MY FAULT, I SWEAR TO GOD!"

This is pretty much how Democrats sound these days. None of their problems are their fault.

For the first time, more than half of voters think President Obama doesn't deserve to be re-elected. Almost three out of four Americans believe that the stimulus was wasted.

Evan Bayh's retirement has triggered a bowel-stewing panic among Democrats. Bayh is from Indiana, one of the two crown jewels of Obama's "red-blue" victory (the other being Virginia). Even a month ago, the notion that Republicans could get within striking distance of taking back the Senate was considered absurd. Now, it's a live possibility.

Obama's defenders note that he is personally popular, which is at best debatable. But even if that were true, Obama's personal political capital is as non-transferable as an out-of-state check drawn in crayon. It's certainly useless in getting ObamaCare or cap-and-trade passed. And, so far, it hasn't helped Democrats in Virginia, New Jersey, Massachusetts.

Harry Reid, the Senate majority leader and Obama's lead legislative Sherpa, is almost surely toast in his re-election bid. Richard Blumenthal, the popular Democratic candidate running for retiring Sen. Chris Dodd's seat in Connecticut says it's an "open question" whether he will even invite Obama to campaign for him. That's a vote of confidence.

Why is this happening? If you listen to the White House and its defenders in the press, the answer is simple: It's everyone else's fault.

Well, that's not entirely right. The Obama administration admits one mistake -- and one mistake only. It didn't explain itself better. In both his State of the Union address and interviews, Obama insisted he got all the policies right. It's just that the reportedly greatest orator in the history of the republic couldn't quite make himself clear enough.

The good news is that he recognizes his mistakes and is going to try again. White House communications director Dan Pfeiffer told the Washington Post this week that "In 2010, the president will constantly be doing high-profile things to be the person driving the narrative."

The multiple trips to Copenhagen, the five-Sunday-shows-in-one-day marathon, the three joint session addresses to Congress in one year, the prime-time news conferences, the state dinner, the speech in Cairo: These don't add up to "constantly" doing "high-profile things"? I can't wait to hear what "high-profile" means. Explain health-care reform while parting the waters of the Potomac?

But even this explanation amounts to dodging blame. It's still code for "You stupid Americans, why can't you understand I'm right and you're wrong?"

That's certainly how Joe Klein, Obama's de facto press flack at Time magazine, sees things. In a piece titled "Too Dumb to Thrive," Klein argues that Americans are too stupid to understand how totally awesome the stimulus was. (Time's Peter Beinart makes a similar argument in a debate with me for Bloggingheads.tv.) What's funny about this is that if nearly two-thirds of Americans are idiots, that means roughly half of Obama's voters were idiots, too. His election was once the epitome of American wisdom. Now it seems he was elected despite the stupidity of his supporters.

Of course, the Obamaphiles switched to this argument only after months of pounding their spoons on their high chairs about the unfairness of Republican "obstructionism" in the Senate. The filibuster was once a bulwark against tyranny, according to Democrats trying to block George W. Bush's agenda. Now, it's proof that the American political system "sucks," according to Obama confidante and liberal super-wonk John Podesta, and evidence that America's system is arguably "worse" than totalitarian China's, according to New York Times columnist Tom Friedman.

And they switched to that argument only after insisting that Bush was responsible for every evil under the sun. (Now, the White House brags about using Bush's anti-terror policies and insists it deserves the credit for success in Iraq.)

Coming soon: A terrible flood! Locusts! Anything and everything to avoid admitting their problems are their own fault.