Planned Summit Is Just an Infomercial in Disguise 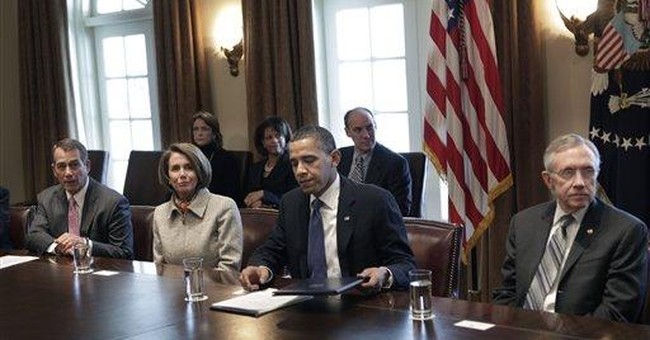 The president has invited congressional Republicans to sit down and talk through health care at a big "bipartisan summit" on Feb. 25. Some think it's a little late for such a conversation. After all, the Democrats have built their health care palace from the ground up, using only Democratic labor and Democratic input; they just can't get it to pass inspection. So general contractor Obama invites Republicans to debate the blueprints, and just the blueprints. Oh, and he wants to debate them, not change them. Not really.

"The president doesn't think we should start over," White House Communications Director Dan Pfeiffer explained. Obama himself has said he's committed to the existing bill(s) in the House and Senate. He just wants to hash out ideas with Republicans, in front of TV cameras, at a much-hyped summit because he thinks it would be good for America, or something. The Republicans can get whatever fixtures they want in the guest bathroom. Beyond that, they should just co-sign ObamaCare and shut up.

The best you can say about the effort is that it fits into the White House's universal answer to all of its problems: "We just need to explain to these confused Americans how we've been right about everything." To that end, the White House wants to use Republicans as a skeptical prop-audience in one last infomercial for the ShamWow of ObamaCare.

The worst you can say is that it's a cynical trap, designed to make the GOP look out of touch, ill-informed and ideological. Indeed, there's a bipartisan consensus growing in Washington that the whole thing is a setup. Obama is going to say "nice doggie" to Republicans right up until the moment he smashes them with a rolled-up 2,000-page health care bill.

Liberals like the idea because they want the Republicans to get brained. They believe the GOP either doesn't have real ideas on health care, or that conservative ideas won't go over well with voters. They hope that Obama the law professor and community organizer will expose all of this, forcing the American people to come to their senses and support legislation they've been hearing about nonstop for a year. Again, liberalism is never wrong, it just has a problem explaining to the mule-headed electorate it's right about everything. Liberalism is always one more tutorial away from sunshine and lollipops for everyone.

Even so, the GOP should go.

Boycotting the event, as some have recommended, would rightly be seen as a sign of cowardice. Although there's no reason why the GOP has to play to the White House's script. Republicans should be respectful and serious, but they should also designate one or two representatives to speak for them. That's what Democrats did when they designated then-Senator Obama as their sole voice in the White House meeting on the financial crisis in September 2008. Sen. John McCain had conceived that meeting as a grand showcase for his statesmanlike leadership. That didn't work out too well for McCain, and there's no reason to expect that Obama's plan is any more foolproof.

That's the great irony in this whole stunt. Since he took office, Obama has been trying to use Republicans as one kind of foil or another. He started by castigating them as mindless drones of Rush Limbaugh. When Republican leaders opposed Obama's hyper-partisan stimulus, the president chastised them. "You can't just listen to Rush Limbaugh and get things done," he told them.

Then the White House and its supporters started casting the GOP -- and the burgeoning tea party movement -- as a Hieronymus Bosch scene of racists and gun nuts. Senate Majority Leader Harry Reid compared opponents of ObamaCare to opponents of civil rights legislation. House Speaker Nancy Pelosi flatly questioned the patriotism of anyone who objected to Obama's policies. And so on.

At every turn, Obama's agenda became less popular, his support among independents cratered, his promises to change the tone in Washington looked ever more transparent, and his magic spell over the press weakened. Gallup now has Obama in a statistical dead heat against a generic Republican opponent, and the Democratic party is in near total freefall, despite the fact it still has almost total dominion over Washington.

Now the president has another brilliant plan. Once again he has Republicans exactly where he wants them. Only someone who thinks Obama is one explanation away from total victory should think the GOP has reason to worry.