The End of an Era That Never Began 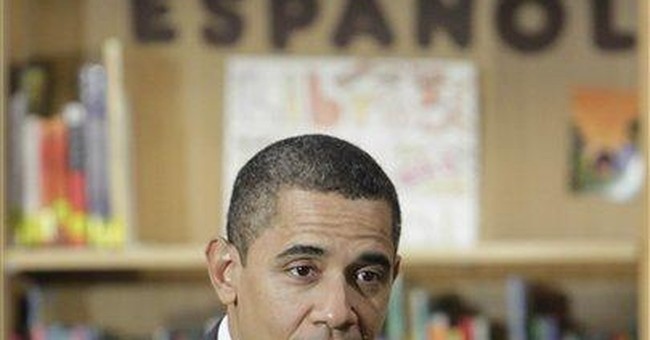 It's all so terribly sad.

To listen to liberals and the White House spin election results, you'd think all was well with the world. Barack Obama is still personally popular! The evil right-wing extremists lost in New York's 23rd congressional district and a Democrat (who was arguably more conservative than the Republican nominee) won. Virginia was always a red state (no matter what we all said about it turning blue with Obama's victory), and the election hinged on local issues. Defeated New Jersey Gov. Jon Corzine was personally unpopular (let's all forget that the White House tried to turn the race into a referendum on Obama's agenda).

In short, the White House spin is: "There's nothing to see here, folks. All is well."

By now, those interested in such things have already heard the rebuttal to these desperate talking points. And there's no need to rehearse them again.

In fact, what is sad is not the spin war. This happens after every election. The partisans and pundits race for the election results like kids charging the disgorged contents of a piñata, claiming convenient facts like candy and shouting "mine!" It's always an unseemly process.

No, what's sad is how far Obama's defenders have had to move the goalposts just to keep up their morale.

They might be right that the elections don't mean all that much for Obama and the Democrats. I very much doubt it, but even having the argument represents an enormous defeat for self-styled progressives.

Almost exactly a year ago, liberals insisted that Obama was going to be FDR 2.0 and that this was the dawn of a new progressive era. Countless magazine articles and newspaper columns were dedicated to the idea we were poised for a "new New Deal." Filmmaker Spike Lee declared that we will henceforth measure time B.O. ("before Obama") and A.O. ("after Obama").

Newsweek became so obsessed with Obama as a redeemer-saint-Jedi reincarnation of both FDR and Lincoln -- and also the sexiest man alive -- it's a wonder the Secret Service didn't issue a restraining order.

Nearly a year later, Newsweek's Nov. 2 cover story is a "survival guide" for liberals who seem on the verge of self-immolation given their disappointment with Obama.

If Obama is the new FDR, it might be instructive to go back and look at the elections in 1933, one year after Roosevelt was elected.

Obviously, the comparison isn't perfect, but many of the imperfections illuminate why the "Obama revolution" was always phony.

The driving political issue that year was the repeal of Prohibition.

Indeed, historians often overplay the popularity of FDR's economic program in 1932 and underplay the importance of his promise to let Americans have a beer. Regardless, the people agreed with the White House on both fronts, and supporters of repeal and the New Deal rallied to the polls. In Virginia, Democrats won a massive across-the-board landslide, outpolling the GOP 3-1.

Meanwhile, the most watched race in the country was for New York City mayor. It was a complicated three-way contest. Republican Fiorello LaGuardia beat the White House's preferred candidate, Joseph V. McKee, a veteran of machine politics in New York, and the Tammany Hall Democrat John O'Brien. The key thing to remember is that while the White House's man lost, the progressives' man won. LaGuardia was in every way a New Dealer who shared FDR's agenda.

This week, Democrats insist Obama is still popular. Maybe so.

But Obamaism is on the ropes. Congress is racing to pass health care reform because Nancy Pelosi and Co. know it is losing popularity, and they fear -- rightly -- that moderate Democrats will jump ship after reading the tea leaves of the Virginia and New Jersey blowouts. They also now know, thanks to Corzine's defeat, that Obama's personal popularity is not transferable.

A true ideological realignment of the sort that people associate with the New Deal requires a massive move in the political center of gravity, with both the middle and the right moving leftward.

There is absolutely zero evidence of anything like that at play in Tuesday's election results. The middle moved rightward and the right continues to hold its ground.

Obama still seems to believe that the equivalent issues to Prohibition and the New Deal are health care reform and cap-and-trade. Every day that looks more and more absurd.

The truth is that Obama's signature issue in 2008 was also repeal -- repeal of George W. Bush. He achieved that on Election Day. And now he is left looking for a mandate he never really had.

He may still be a successful president. He will surely have some victories. But the "new era" is now over, before it even began.