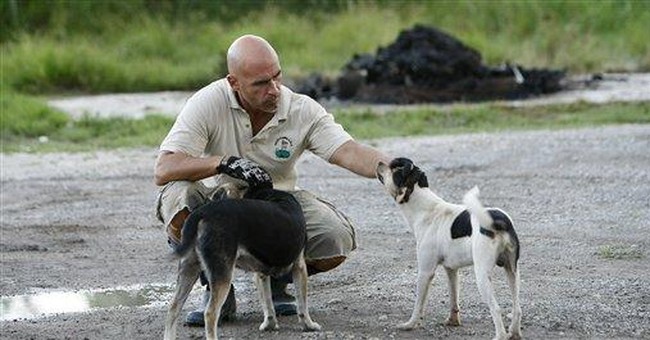 I'm sure it sounds extravagant, but Cosmo had been having unexplained seizures, so we took him in for an MRI and a spinal tap after a batch of the normal, cheaper tests.

He's a handsome dog, but he's built like an old East German car. When he was barely a year old, he came up lame in his front right leg. The vets had to cut the bone in two, insert a long metal pin and then snap it all back in place. At the time, the surgeon suggested that we might avoid the expense by simply "returning" him to the animal shelter, which in canine terms would be like returning a dissident to North Korea.

Since then, Coz has had surgeries on both of his back legs and a bunch of other, lesser procedures stemming from the rough-and-tumble of doggy life. We've stopped counting, but I'm sure we've spent more than the trade-in value of several cash-for-clunker Buicks.

But despite all the hassle and expense, we never regret the expenditures.

Now, given the debate in Washington, it's at this point where I might be expected to pivot to some incisive -- or perhaps insipid -- argument about human-versus-animal medical care. After all, I understand why insurers wouldn't cover Cosmo, given his many pre-existing conditions. And while I firmly believe reformers could learn a lot from the world of animal medicine, where timely and effective services are provided without benefit of giant bureaucracies, that's another column.

More interesting to me is the reaction from liberals. As one friend put it: How does a staunch conservative end up taking his dog to the neurologist? Liberal bleeding hearts are supposed to do this sort of thing, not the hardhearted Scrooges of the right. We like war and shooting fur-bearing creatures and cutting budgets for agencies that remove thorns from kittens' paws.

I understand the stereotype, and it surely exists for a reason. But the truth is that ideology has little to do with it. The wonderful thing about dogs -- and yes, cats too, I suppose -- is that they are beyond the reach of ideology. Not only does affection for dogs have no significant correlation to politics, but politics holds no interest whatsoever to dogs.

Talk about health-care reform to Cosmo and he'll tilt his head, yawn and walk away just as quickly as he would if you opted to discuss the assassination of Trotsky or the defenestration of Prague. But if you say the words "tennis ball" or "squirrel," he will be utterly fascinated.

And that's what I love about dogs. They just don't care about such things, and they encourage you not to care either -- at least while you're with them. You can't say the same thing about children, because they grow up and inherit the society we leave behind. Being a good parent requires caring about politics. Dogs, meanwhile, keep their innocent doggy goodness from kennel to grave, obviating the need to explain to them why tax cuts are awesome.

Dogs give us any number of amusements and comforts, but their greatest gift is to remind us that love and loyalty exist outside the ephemeral pieties of contemporary life. This is true for free marketers and Fabian socialists alike.

Cosmo the Wonderdog is no stranger to mystery. Allegedly half-Australian cattle dog, half Labrador, the truth is that we don't know what he is. I simply say he's a rich ethnic cocktail in the American tradition.

We suspect he was abused as a puppy, because when we first got him, Cosmo saw me roll up a magazine to kill a bug and immediately ran out of the room in fear. To this day, if he sees a rolled up newspaper or magazine, he has the same response. And to this day, I routinely daydream about finding the jerk who hit my dog.

The spinal tap required shaving a patch of fur from the back of Coz's head; now he looks a bit like a furry Trappist monk. The results were good in that he doesn't have a brain tumor and has no obvious infections, but we still don't know what's wrong with him.

So how did a hard-core right-winger like me end up taking my dog to the neurologist? Because my dog needed one.