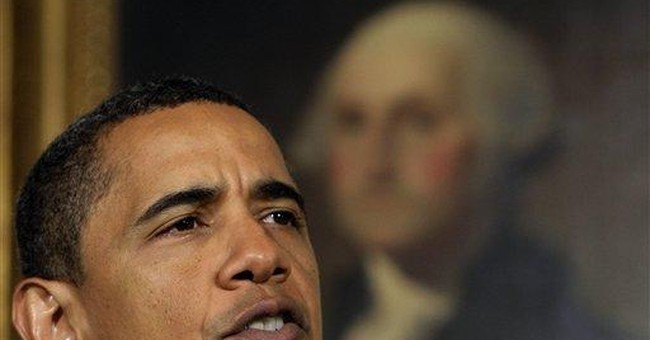 The Democratic Party is panicking, lashing out like a cornered animal, all because its effort to take over the health care industry is coming apart like so much wet toilet paper.

Nancy Pelosi, who will get her own bound volume in the annals of asininity, has outdone herself. When asked by a reporter whether the protests at various town hall meetings represented legitimate grassroots opposition or were manufactured "Astroturf" stunts, she replied, "I think they're Astroturf. You be the judge. They're carrying swastikas and symbols like that to a town meeting on health care."

Now this is a pas de trois of dishonesty, slander and idiocy. Not only is Pelosi lying when she says protestors are bringing swastikas to these town halls, not only is she suggesting that American citizens are Nazis for having the effrontery to get in the way of ObamaCare, but she's also saying that the alleged swastikas are obvious proof that these protests are manufactured by slick P.R. gurus.

How does that work? What public relations genius says: "OK, we need these protests to seem like an authentic backlash of real Americans. Make sure everyone has enough Nazi paraphernalia!"

Meanwhile, Sen. Barbara Boxer insists the protests have to be fake because the protestors are too "well-dressed." Likewise, White House spokesman Robert Gibbs says this is all "manufactured anger" because the protestors -- he calls them the "Brooks Brothers Brigade" -- are too tastefully appointed to be authentic protestors. Apparently only filthy hippies can petition government.

This, of course, doesn't preclude the possibility that the protestors are also Nazis; they were snappy dressers (Hugo Boss made SS uniforms after all). But we'll leave that there.

The White House is asking supporters to submit the names of anyone who forwards e-mail with "fishy" information. "Fishy information" herewith defined as anything that serves as a speed bump for the White House steamroller.

The DNC has put out an ad claiming that the "right wing extremist base" is out to "destroy" Barack Obama, so it has unleashed "angry mobs ... mob activity straight from the playbook of high-level Republican political operatives. They have no plan for moving our country forward, so they've called out the mob."

The DNC ad points to a memo written by an activist named Bob MacGuffie as proof that Republican political ops are pulling the strings. It turns out that MacGuffie, a decent-seeming fellow, is a rank amateur whose Right Principles PAC has collected a mere $5,017, disbursed the staggering sum of $1,777, and has 23 members on Facebook and five followers on Twitter, according to the Weekly Standard's Mary Katharine Ham.

It's difficult for mere mortals like us to fully grasp the enormity of the Democrats' hypocrisy. Put aside all that talk of dissent being the highest form of patriotism. Overlook that Democrats would have upended jerry cans of gasoline and immolated themselves in protest if the Bush administration had asked people to inform on their neighbors. You can even forget that the DNC's claims are untrue.

They only thing they left out is the instruction to leave the Brooks Brothers jackets and swastikas at home.

The reason for the panic is simple. Obama and the Democrats feel entitled to have their way on health care. This sense of entitlement is understandable. They won the election and control everything.

The problem is that Americans don't like what they've heard about the plan, and Obama is incapable of selling, or unwilling to sell, it on the merits (perhaps because he knows the plan will lead to the single-payer system he has long sought but now denies wanting). That's why Obama spends most of his time either attacking critics or denouncing the status quo.

Simply put: This administration believes it knows best. It feels it is the only legitimate beneficiary of "people power." It thinks it has a monopoly on democratic organizing. And it is terrified that it will be hobbled if it loses this fight.

So, it just stands to reason that anyone who stands in the way must be a fraud, a puppet, a goon -- or even a Nazi.