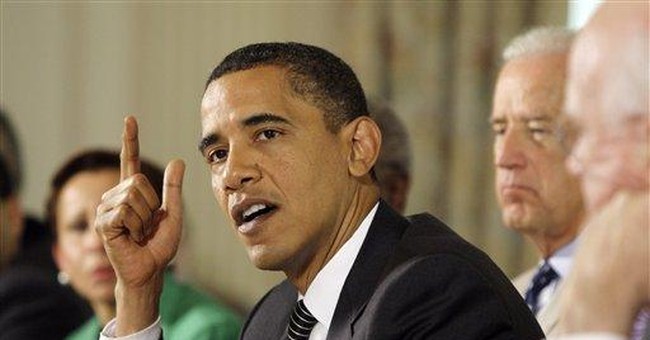 Huzzah! Thanks to a few pointed questions from the press corps at a White House news conference, the long Obama captivity of the media is at an end. The Hotline, an inside-the-Beltway tip sheet, proclaimed June 23 "The Day the Love Ended."

The New York Daily News' Michael Goodwin celebrates the press corps' ability to channel the mood of the country: "By peppering the President with forceful questions ... and by challenging some of his slippery answers, reporters captured the changing tone in the country. Like the end of a real honeymoon, blind infatuation is giving way to a more accurate view of reality."

"The press corps gets it," Goodwin writes. "For Obama, the hard part begins now."

Swamis and carnival contortionists who can fit their bodies into a Happy Meal box could learn something from the press about flexibility, given its ability to effortlessly pat its own back.

Silly me, I thought the main job of the press was to challenge slippery answers and ask tough questions, not to do that only when it helps "capture a tone."

But what truly confuses is how a few tough questions make up for months of forehead-scraping obeisance to The One. Suddenly these half-dozen reporters are media redeemers? "They Asked Tough Questions for Our Sins."

Indeed, shouldn't this be a moment for reflection on how bad the press has been until now? Instead of "The Honeymoon Is Over," why isn't the headline, "Handful of Reporters Make Colleagues Look Like Chumps"?

A week ago, CNN, the Washington Post and other major news outlets covered Obama's killing of a fly as if it was a major news event. (At least when the Russian press similarly gushes over Vladimir Putin, he's karate-chopping cinderblocks in half.)

The good news: More photo-ops are coming, because the White House apparently has a major fly problem. I know that because I read the New York Times' flood-the-zone coverage.

As Kool Aid-allergic columnist Robert Samuelson has noted, such sycophancy is a serious public-policy problem because the president is proposing a radical overhaul of pretty much everything, and for the most part the press hasn't cared that his explanations are iffier than gas-station sushi, his assurances more dubious than a North Korean press release. Obama's ongoing promise that he's "creating or saving" jobs is as plausible as the chess team captain's claim that his supermodel girlfriend can't fly down from Canada for the prom.

Maybe the fly infestation at 1600 Pennsylvania Avenue has something to do with the fact that the White House is a central hub of bovine manure distribution?

I can't remember: Was it Shirley Temple or Keyser Soze who said the greatest trick the Devil ever pulled was to convince the world he didn't exist? It doesn't matter. But I do think of that line whenever I hear liberals claim the press isn't biased.

For instance, Dan Rather famously insisted media bias was a "myth," even after he paid blind Bulgarian orthodontists to officially verify those blockbuster National Guard memos written in fingerpaint. OK, that's not exactly how it went down. But as Dan might say, my version is fake but accurate.

But denial still has its advantages. It allows concubines to say they're merely highly compensated conversationalists. For the press, it allows them to act on their own prejudices and call it "news judgment." Alas, were it not for the fact that Oprah already has a magazine called "O," this same news judgment would have resulted in Newsweek changing its name to better reflect its status as the official tribute album of the Obama years (long may He reign). Subscribe now and get your free plate from the Franklin Mint.

Denial doesn't need much to sustain itself. A little convenient corroboration goes a long way. A dieter drops a few pounds and then feels justified in eating a dumpster load of Cheetos. The press has a nice moment, suddenly all is forgiven and forgotten and they go back on their merry way.

If the honeymoon ended Tuesday, the vows were renewed Wednesday when ABC News staged an infomerical on socialized medicine from the White House. ABC was tough, though. It opted not to hand out commemorative plates.