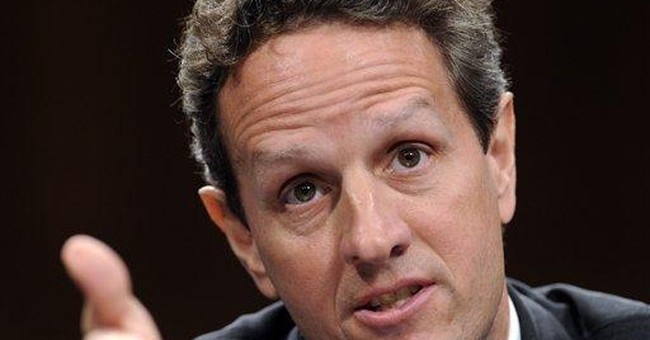 What did you do when capitalism died, Daddy?

I won't be surprised to hear that question from my daughter by the time she gets out of college, or should I say the State Mandatory Voluntarism Training Facility.

When liberals hear conservatives decry the death of capitalism, they titter and roll their eyes. "Oh, you paranoid right-wingers! You see Bolsheviks around every corner."

But such exasperation is the exhalation of concentrated ignorance. The absence of free markets isn't necessarily Bolshevism, or even socialism. Capitalism's death can come in many forms, by many different hands.

After all, not all of Julius Caesar's murderers thought alike. They were united in their belief Caesar had to go, not necessarily on what would replace him. Caesar fought off his attackers until he saw that among their number was Brutus, his friend. "Et tu, Brute?" he exclaimed; "You, too, Brutus?" It was not the enemy blows but his friend's betrayal that sapped his will to fight and brought his downfall.

Some historians claim Caesar actually said, "Tu quoque, fili mi?" or, "You too, my child?"

Whether that's more accurate, it certainly seems a more fitting declaration as the coup de grace of capitalism's murder is at the hands of its most successful child: big business.

Everywhere we look we see the great and once-great beneficiaries of free markets running to the state for protection from the cruel bullying of competition. On health care, insurance companies and others repeat the mantra that they want to be "at the table rather than on the menu," all the better to be positioned as a tax collector of the welfare state. General Motors and Chrysler have gone from being pimped-out prostitutes of the state to outright chattel more akin to the leather-bound gimp in "Pulp Fiction," eager to do the bidding of the president and the UAW.

Once-proud companies like GE have become seduced by global warming schemes, because they recognize that there's more money to be made selling white elephants to Uncle Sam than there is selling competitive products consumers want. Indeed, cap-and-trade taxes promise to deliver precisely the protectionist industrial policies the left has dreamed of for decades, only under a "progressive" label.

This week, Philip Morris, the biggest of the Big Tobacco companies, supported and won passage of an "anti-tobacco" bill that will make it easier for Philip Morris (a subsidiary of Altria) to sell cigarettes by making it harder for smaller, more innovative firms to compete. One way it will do that is by curtailing the First Amendment rights of tobacco companies, making it harder to advertise their products (including healthier alternatives to normal cigarettes). Philip Morris, maker of Marlboro and other established brands, already controls 50 percent of the market. That's why it lobbied government to keep it that way.

Also this week, the White House announced its plan to deal with "systemic risk" in the financial markets. The basic idea is that big firms -- giant banks, insurance companies, etc. -- cannot be allowed to fail if their failure threatens something called "stability." The Obama administration is confident that with its new organizational flow charts and enhanced job description for the Federal Reserve, bureaucrats will suddenly see clearly what they couldn't see before. These regulators will know exactly when bubbles get too big, when booms last too long, and when tens of thousands of managers, investors, actuaries and bankers make bad or sub-optimal decisions.

The problem, other than the shortage of Jedis and shamans to fill these posts, is that big companies will understand the surest way to attain immortality is to become too big to fail. Once they've achieved that privileged status, these companies will become de facto wards of the state, insured for life at taxpayer expense like Fannie Mae and Freddie Mac, and in exchange they will do whatever Uncle Sam asks.

It's too soon to tell which companies will leap at the opportunity to sell their souls for immortality, but you can bet that many of those already suckling the TARP teat will be among the first to celebrate the sagacity of the new system.

While doctrinaire socialists might feel betrayed by liberalism's cozy embrace of big business, their betrayal pales in comparison to the bitterness of free-marketers who defend big business's freedom to operate, only to see these businesses use that freedom to hide behind the skirts of the nanny state. Real freedom means the freedom to fail as well as succeed. Big business wants to be protected from the former and deny competitors the latter. And their betrayal, more than anything, disheartens those who would defend both freedoms.