Obama's Choice Is Not to Choose on Iran 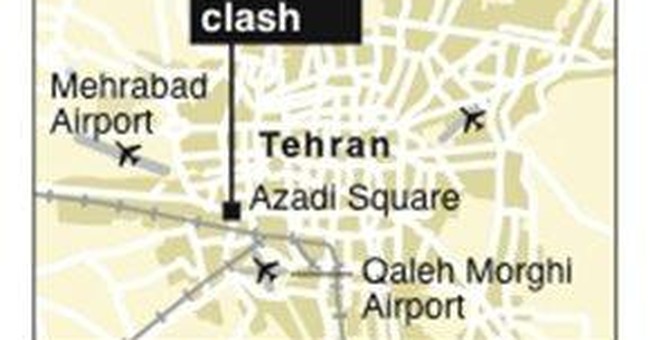 Do it, President Obama, please. Take the side of democracy.

Declare yourself and your nation on the side of hope and change where it is more than a slogan and better than a rationalization for ever-bigger government. Stop measuring the success of your diplomacy with Iran by the degree to which the grinning, hate-filled stooge of a clerical junta will "temper" his rhetoric about the pressing need to destroy Israel and slow his ineluctable pursuit of nuclear weapons.

Instead, choose a higher standard. Look to history. Look to the aspirations of the students risking their lives and livelihoods to protest a sham election. Stop fawning over the mythological Muslim street only when it hates America, and look to the real Iranian street at the moment of its greatest need, when its heart may be open to loving America.

You often invoke President Kennedy's pledge to put a man on the moon to justify your domestic agenda. You and your supporters invite comparisons to Camelot. Well, what of John F. Kennedy's most solemn vow? "Let every nation know, whether it wishes us well or ill, that we shall pay any price, bear any burden, meet any hardship, support any friend, oppose any foe, in order to assure the survival and the success of liberty."

No, we should not bomb Iran, or invade it. Those prices are too steep; those burdens are too heavy. But maybe you could lift a finger for democracy?

During the campaign you mocked those who belittled your rhetoric as "just words." Well, what you've offered so far is less than just words. You've put a fresh coat of whitewash on Iran's sham "democracy." On Monday, you proclaimed yourself "troubled" by the events in Iran, before hinting that you'd negotiate with Mahmoud Ahmadinejad no matter what an official investigation into his "landslide" victory found. (Would you trust Mafia internal audits, too?)

Before the sham election you cheered Iran's "robust debate." But that debate has been robust only if you are grading on a curve. Ahmadinejad's main opponent, Mir Hossein Mousavi, was an accidental reform candidate. The mullahs had disqualified about 400 others, leaving in the race only four presumed hacks deemed pliant enough not to rock the boat. Mousavi's popular support and the robustness of the debate he ignited were an unintended consequence of a rigged election and a clerical politburo indifferent to its people's desires, not the intention of a democratic regime.

Reportedly, you are biding your time, waiting to see what happens, as if it is a great mystery. Your campaign lived and breathed YouTube. Check it now, check it often. You and your team promised "soft power" and "smart power." How about moral power? Because by not clearly picking a side, it appears you have chosen the wrong side.

Do you fear antagonizing the powers-that-be in Iran? That ship has sailed. Though I am sure they're tickled by your eagerness not to roil the seas around them. Is it because you think "leader of the free world" is just another of those Cold War relics best mothballed in favor of a more cosmopolitan and universal awe at your own story?

"Enough about those people bleeding in the street. What do you think of me?" Is that how it is to be?

During the Bush years, what was best about liberalism had bled away. One of the worst things about the Republican Party has always been its Kissingerian realpolitik, the "it's just business" approach to world affairs that amounted to a willful blindness to our ideals beyond our own borders. The Democratic Party may not have always gotten the policies right, but it had a firm grasp of the principle.

In the 1990s, liberals championed "nation building," and many conservatives chuckled at the naivete of it. Then came Iraq, and Republicans out of necessity embraced what liberals once believed out of conviction. The result? Liberals ran from their principles, found their inner Kissingers and championed a cold realism whose chill emanated from the corpse of their ideals.

Labor unions, such as the AFL-CIO, once battled tyranny abroad on the grounds that workers everywhere need democracy. Today, the president turns a blind eye to the independent labor movement in Iran, and the unions and Democrats spend their time trying to figure out how to eliminate the secret ballot in the American workplace.

So far, "hope and change" has meant spending trillions we do not have on expanded government we do not need. Meanwhile, the huddled masses of Iranians yearning to breathe free think hope and change means something more. But the new American colossus stands all but silent, her beacon dimmed, her luster tarnished.