How to Solve the Pirate Problem 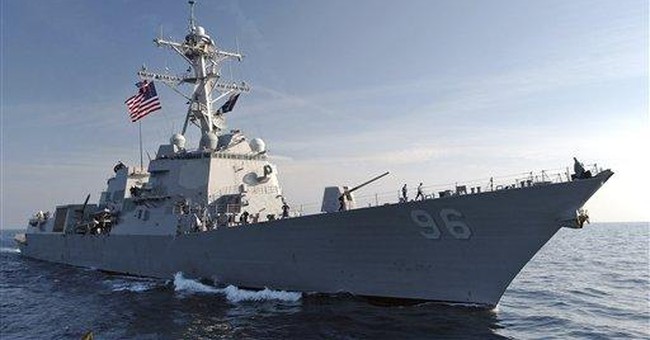 Well, that was simple. Shoot the pirates, problem solved.

OK, not the problem of piracy per se. But the problem of these specific pirates off the coast of Somalia: taken care of. And, if more pirates were shot, there would be fewer pirates. Unlike, say, jihadist terrorists, pirates are in it for the money. Raise the cost of being a pirate -- in denominations of pirate blood -- and you'll lower the supply of pirates. That's how governments -- good and bad -- have dealt with piracy for thousands of years.

President Obama didn't personally order the Navy SEALs to take out the Somali pirates holding Capt. Richard Phillips hostage. He left the decision up to the commanders on the scene, who made the right call. Obama should be congratulated for that, just as surely as he would have been criticized if things had gone south.

For those of us who see the resurrection of Jimmy Carter in Barack Obama, this was a nice surprise. People forget how reluctant the Carterites were to use force. Carter agonized over whether to rescue American hostages in Tehran. According to Charlie Beckwith, the commander of Delta Force in charge of the mission, he informed Carter's point man, Warren Christopher, that in the rescue effort, "anyone who is holding a hostage, we intend to shoot him, and shoot him right between the eyes. We intend to shoot him twice." Christopher was stunned, according to Beckwith. "Would you consider shooting them in the leg, or in the ankle or the shoulder?"

So this, as they say, is progress.

But only if you look at things along a timeline beginning a mere 30 years ago. Looked at from 200 years ago -- the last time an American-flagged ship and crew were seized by pirates -- we've fallen terribly behind.

Why has this become so complicated? I don't mean finding and shooting pirates, which can be quite difficult, according to experts. I mean the issue of piracy, which has been around since the 13th century B.C. And it hasn't gotten any more complex.

Several answers come to mind. For starters, the culture has become more pro-pirate. Although everyone hoped for the safe return of Phillips, it was clear the media and public thought there was something charmingly exotic about all this pirate talk. Avast, mateys, and all that.

Of course, tales of Blackbeard and the like have always fascinated, but in recent years pirates have joined ninjas, mafiosos, drug dealers and even serial killers as pop-culture heroes. If we can make cannibals and psychopaths -- albeit fictional ones -- like Hannibal Lecter and Showtime's "Dexter" into sympathetic figures, it's no wonder we can take a profession historically associated with murder, rape, pillaging and torture and turn it into a Disney franchise.

Then, of course, there's the fact that the pirates today aren't flamboyantly dressed, gold-bling-sporting white guys better suited for "Project Runway," but very poor Muslim Africans from a failed state. Generations of "don't blame the victim" talk have made us sympathetic to criminals, particularly Third World ones.

Indeed, the British, who once hastened human progress by hunting and hanging pirates, are now afraid to allow the Royal Navy to even arrest them for fear that under the 1998 British Human Rights Act, the captured pirates might demand asylum in Britain. After all, you can't send pirates back to their home country, where they might be mistreated.

And that raises the primary reason this all seemed so complicated. Lawyers. Layers and layers of lawyers. Bret Stephens asked in a prescient Wall Street Journal essay last November, "Why Don't We Hang Pirates Anymore?" And the answer, he discovered, is that "there is no controlling legal authority." A combination of international and domestic law has made dealing with what Cicero dubbed "hostis humani generis" -- enemies of the human race -- just too darn complicated.

Add to this the fact that trial lawyers, bureaucrats and accountants for too long have conspired with corporate honchos to make paying ransoms the least costly option. Shipping companies don't want their crews armed to defend themselves.

Piracy is still a small problem in the scheme of things, but that makes things easier. Cannibalistic serial killers are relatively rare, too. That hardly means there's a great mystery about what should be done with them.

What remains to be seen is whether this problem was solved despite Obama's instincts or because of them. The SEALs solved a hostage crisis by shooting three pirates. The question is whether Obama will prevent a pirate crisis from emerging by making it easier to shoot even more pirates.