A Blueprint for a "Remaking" 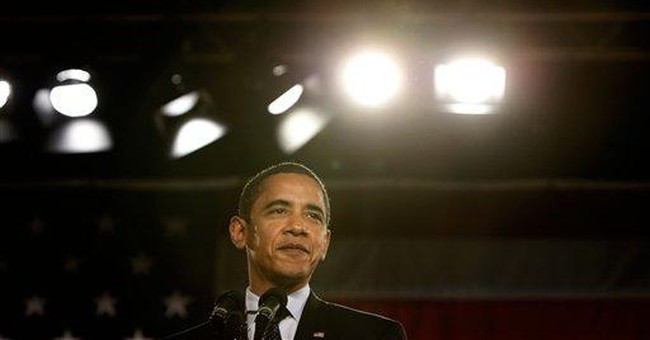 The economy is in the Slough of Despond, according to President Obama. If we don't do what he says, we invite a catastrophe from which we may never recover. Indeed, in his Feb. 24 address to Congress -- in a passage intended to be hopeful and uplifting -- Obama compared our plight to that of America in the darkest days of the Civil War, Great Depression, World War II and the Industrial Revolution.

But there's good news! According to his budget -- which he assures us is an "honest accounting" of our predicament -- the economy will shrink by only a measly 1.2 percent this year (it fell by a 6.2 percent annual rate in the final quarter of 2008) and then take off next year with 3.2 percent growth and soar for years to come.

So which is it? Are we facing the biblical doom described in "Ghostbusters" where fire and brimstone come down from the skies, rivers and seas boil, the dead rise from their graves, and dogs and cats live together? Or, are we in a steep-but-conventional recession that will run its course by the end of the year and be replaced by higher-than-normal growth?

Well, it depends on which Barack Obama you happen to be listening to. It's tempting to say the man is two-faced, but that seems like a woeful undercount. The man has more facets than a disco ball, more angles than a rhombic triacontahedron.

He cites -- and incites -- fear over the financial crisis, the recession and the housing mess to justify his enormous expansion of government, but most of his priorities have little to do with any of these things. Candidate Obama promised a net budget cut. But President Obama wants to increase discretionary spending by 12 percent. He proposes increasing taxes by $1.3 trillion and entitlement spending by at least $700 billion, but insists that he doesn't believe in "bigger government."

He loves to point out that he inherited a large deficit from the Republicans -- which he did. But for reasons that are hard to grasp, he then suggests that this means Republicans have no right to complain when the deficit quadruples in one year or when he seeks to spend trillions of dollars on programs that have nothing whatsoever to do with ending the recession. Democrats flayed President Bush for deficits in the $300 billion to $400 billion range, when the country was at war and recovering from 9/11. Obama boasts that the deficit will be down to $500 billion to $600 billion during "peace and prosperity" -- and that's only if his absurdly rosy scenario comes to pass. And we are supposed to applaud his fiscal seriousness to boot.

But the schizophrenia runs even deeper. The White House and congressional Democrats simultaneously caterwaul about the deficit they inherited from Republicans while they also tsk-tsk the GOP's woeful failure to spend on "underfunded" domestic priorities. During the Bush years, spending -- whoops, sorry, "investment" -- in most of these burning domestic priorities soared: education (58 percent), Social Security (17 percent), Medicare (51 percent), health research and regulation (55 percent), highways and mass transit (22 percent) and veterans' benefits (59 percent). But, according to Democrats, if they had been in charge we would have spent a lot more on these pressing needs and we wouldn't have this terrible Republican-fueled deficit. How does that work?

The White House says withholding $13 less each week from most workers' paychecks is a major tax cut. But it doesn't see raising the cost of gas, electricity and heating oil as a tax hike. Some even say that raising taxes on energy, and therefore manufacturing, not to mention investing and small business, isn't a great idea in a recession.

Fortunately, Obama says this will all work out, and his words trump any form of earthly logic. For example, the president claims that he's actually cutting the budget by not spending money on the Iraq war. The problem is he's counting enormous spending on Iraq -- $170 billion a year -- that not even President Bush ever envisioned, all the way through 2019 (Bush planned on a 2012 withdrawal). In other words, he's "cutting" hundreds of billions from money no one ever planned to spend, in years when he won't even be president, and touting that as savings. Why not simply count the trillions in savings we would reap from forgoing a long and brutal war with the Klingon empire?

No, seriously, try this with your boss sometime. First, go buy a Mercedes on the company credit card. Then tell him that you saved money because you were planning on buying a Learjet -- two years after your mandatory retirement age. Then ask him for an attaboy, or even a raise. See what he says. I dare you.

Meanwhile, not a penny of the actual money raised under the Obama budget ever goes to reducing the deficit. It all goes to new or increased spending. Obama says that he and his team went "line by line" through the budget and found "$2 trillion in savings." But along with the fictional Iraq war savings, the bulk of the rest -- a trillion dollars -- comes from increased taxes.

And that's the translation key to both Obama's rhetoric and his numbers. Raising taxes is, in Obama's eyes, a form of "savings" because whatever money you earn belongs first and foremost to the government. As he told Congress, Bush's tax cuts amounted to a "transfer (of) wealth to the wealthy." In pre-Obama America, keeping more of the money you earned wasn't considered a government transfer payment. But, as he promised in his inaugural address, his goal is the "remaking of America." With little more than a month in office, he's off to a good start.