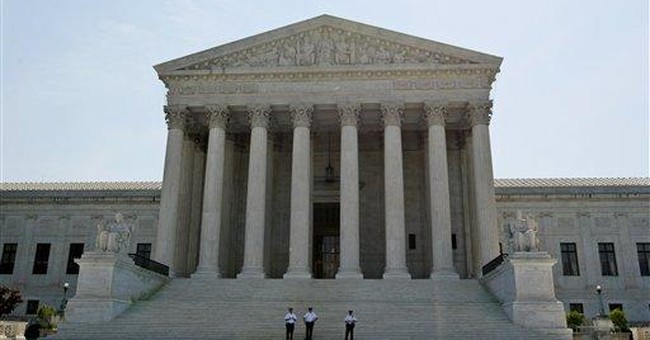 Out of 16 major American institutions, Congress ranks dead last in the eyes of the American people according to Gallup. Even HMOs are more revered. If Carrot Top and Joey Buttafuoco were elected to Congress, it would improve the legislative branch's reputation.

The reasons for Congress' craptacular standing are too long to list here. But some culprits never get blamed, even though they are hiding in plain sight. Chief among them: the U.S. Supreme Court.

Have you ever had a boss who treated you like a child, second-guessed you, reworked whatever you did so that you felt no ownership of the final product? As a result, did you take your job less and less seriously precisely because you knew that whatever you produced wouldn't really be yours anyway?

These days, the court seems to find duly enacted laws unconstitutional six days a week and twice on Sunday.

Lawmakers rarely bother their pretty little heads with the Constitution. Rather, they just load as much spit, tar, Vaseline and whatever else they can think of on a legislative fastball and try to get it over Scotus' plate. If those imperial umpires don't call a constitutional strike, well, then, voila it must be constitutional.

Presidents are no better. George W. Bush, in his one act that does approach an impeachable offense, signed campaign finance "reform" in 2002 even though he made it clear he thought the law was unconstitutional. At the ceremony, he expressed his "concerns" over the fact that the law -- he signed! -- "restrains the speech of a wide variety of groups on issues of public import in the months closest to an election."

But, have no fear, the super court is here. "I expect," he explained, "that the courts will resolve these legitimate legal questions as appropriate under the law."

No sale. Congressmen, senators and presidents alike swear to protect and defend the same constitution as the Supremes do. In the 19th century, Congress actually debated constitutionality with passion, and if it found a proposed law falling short of that standard, it was fixed or killed, not outsourced to the Supreme Court for retrofitting.

The court, by assuming that responsibility, and the other branches of government, by surrendering it, have permanently damaged the constitutional order. Indeed, Thomas Jefferson believed that a judiciary with final jurisdiction over the constitutionality of presidential and legislative actions "would make the judiciary a despotic branch" of government.

Today, that despot has a name. It's Justice Anthony Kennedy. Kennedy rules -- thanks to his status as the court's swing vote -- as the true King of America.

For example, Congress and the president hammered out a system for treating enemy combatants held at Guantanamo Bay -- at the behest of the court. But that compromise wasn't to His Majesty's liking, so it was invalidated anyway in Boumediene v. Bush, which gave members of al-Qaida more rights than captured Nazis in WWII.

Indeed, the whole debate in Congress has been over to what extent the Supreme Court should be running our POW system, not what our POW policy should in fact be.

And just this week, Justice Kennedy issued a diktat in which he quashed Louisiana's sovereign and popular decision to execute a man for raping his 8-year-old stepdaughter in a manner so brutal the details cannot be even hinted at in this space. Why? Not because such executions violate the sensibilities of the public, or the constitutional precedents, or even what Kennedy calls "evolving standards" of decency, but simply because they are at odds with the court's own sense of lese-majesté.

Supreme Court critic Mark Levin has it right when he says that "every time the Supreme Court meets in secret conference, it sits as a constitutional convention, rewriting the Constitution at will."

Aside from a legalistic-yet-lawless despotism that makes the meaning of our constitution hinge on how much fiber Justice Kennedy's diet has on a particular day, the result of this pathetic state of affairs is that the first branch of government doesn't take itself seriously. It is merely a caucus of goodie-givers, sent to Washington to dole out trinkets to whomever it may. At least the president is still charged with life-or-death decisions from time to time. But Congress doesn't take itself seriously, so who can blame Americans for following its lead?