An Early Autopsy on the Clinton Campaign 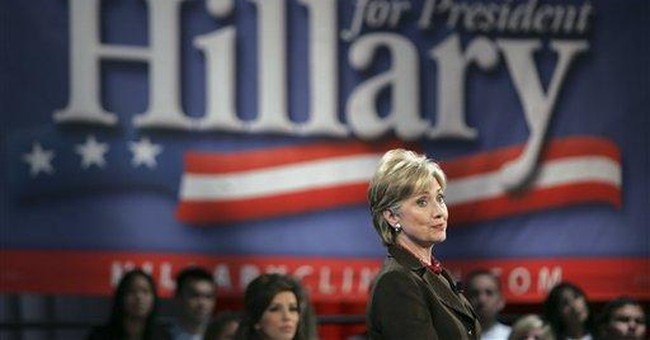 I'm writing this before the results from Ohio and Texas are known. And in an election year where events have been brutally unkind to predictions, it seems folly to pronounce Hillary Clinton a dead woman walking, but I'm going to do it anyway. After all, the great difference between pundits and coroners is that pundits don't need to wait for actual death to commence the autopsy.

Whatever the results of Gotterdammerung Tuesday are, it seems clear that Clinton won't be the Democratic nominee. Indeed, the only way for her to win is for Barack Obama to lose by his own hand. Like some invulnerable demigod who can only be destroyed by his own hubris, Obama is now mathematically and politically immune to Clinton's attacks. She is now the true candidate of hope.

That's ironic, given that Clinton's whole campaign has been based on the premise that she is the careful, strategy-obsessed candidate. From health-care policy to hairdo, Hillary is a planner. As I've said before, her idea of spontaneity is to leap from her prepared text to her prepared index cards.

Hence the glorious failure that she and her strategists neglected to imagine they'd even need a strategy after Super Tuesday.

And there were other more obvious mistakes. In the mother-of-all-change elections, the Clinton team opted to make her campaign about "experience" and about veering "back to the future," in Bill Clinton's words. Or were those Hillary's words? Is there a difference? Confusion on this point is understandable given that the ex-president not only speaks as if a vote for Hillary is a vote for him, but also seems to think that voters are actually voting for him.

The decision to use Bill as a surrogate - the ultimate Hillary in a pantsuit - has been hotly debated for months. The arguments in favor (he's popular with the base, he gets enormous media attention, he's an indefatigable campaigner) and the arguments against (he's controversial, he puts the campaign "off message," his narcissism is all-consuming, etc.) all seem to have missed the larger point. By dragooning Bill into the race - or, more accurately, by failing to prevent him from leaping into it - the Clinton team reinforced the perception that Hillary is the closest thing to an incumbent the Democrats have.

For the first few debates, Hillary insisted there were little to no substantive differences among the Democratic contenders. Over time, voters took her word for it and decided that in a year when Democrats are likely to win and in a race where the policy differences are trivial, they'd rather vote for the candidate who inspires them about the future than the candidate who wearies them with memories of the past.

This points to why Clinton must have a special hatred for Obama. Perhaps not for the man but certainly for the phenomenon. Obama would have been an impressive candidate in any field. But only in a contest where Clinton sucked up most of the oxygen could Obama thrive in such rare air, accomplished as he is in deflating his lungs with outbursts of rhetoric suitable for Olympian heights. Clinton may be a fighter, and she may have claimed to be named after legendary mountain climber Sir Edmund Hillary. But she was raised to fight in the trenches and unsurprisingly gets altitude sickness at the oratorical heights where Obama thrives.

There's one last problem with Clinton's positioning as the experienced candidate in the race. She is not all that experienced.

Last week, the Clinton campaign belched out an argument that felt hackneyed when used by Jimmy Carter and Walter Mondale. A Clinton TV ad asks voters which candidate they'd want in the White House at 3 a.m. when a crisis erupts. The tested-and-ready Clinton is supposed to be the obvious answer. But obvious to whom? How has she been tested? Such is the Clinton campaign's overweening sense of entitlement that when a reporter asked what crises Hillary has actually handled, the Clintonites had no answer at the ready.

Again, miracles happen, and Hillary may win. But come the fall, no matter who the Democratic nominee is, Democrats won't be pleased that Hillary raised the who-should-take-the-call question with John McCain in the race.