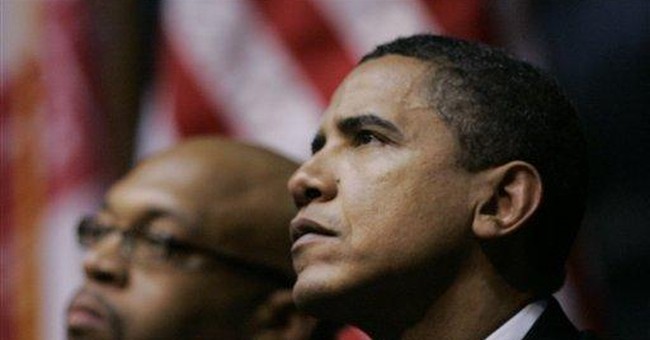 "Everything was absolutely ideal on the day I bombed the Pentagon."

This excerpt from William Ayers' memoir appeared in the New York Times on Sept. 11, 2001 - the day al-Qaida terrorists crashed hijacked planes into the World Trade Center and the Pentagon. Ayers, once a leader in the Weather Underground - the group that declared "war" on the U.S. government in 1970 - told the Times, "I don't regret setting bombs," and, "I feel we didn't do enough."

Ayers recently reappeared in the news because Politico.com reported Friday that Barack Obama has loose ties to him. Ayers, now a professor of education at the University of Illinois at Chicago, is apparently a left-wing institution in Chicago's Hyde Park neighborhood, and Obama visited Ayers' home as a rite of passage when launching his political career in the mid-1990s. The two also served on the board of the charitable Woods Fund of Chicago, which gave money to Northwestern University Law School's Children and Family Justice Center, where Ayers' wife (and former Weather Underground compatriot who glorified violence) Bernardine Dohrn is the director.

I don't think Obama supports domestic terrorism, and I'm sure he can offer eloquent explanations for why he shouldn't suffer any guilt by association. The Hillary Clinton campaign, however, did try to score a few political points, meekly linking to the Politico story on the campaign Web site's blog. The campaign probably couldn't be more aggressive without calling attention to how Bill Clinton pardoned Puerto Rican separatist terrorists - perceived to be a way to gain support for Hillary's Senate bid from left-wing Puerto Ricans in New York.

What fascinates me is how light the baggage is when one travels from violent radicalism to liberalism. Chicago activist Sam Ackerman told Politico's reporter that Ayers "is one of my heroes in life." Cass Sunstein, a first-rank liberal intellectual, said, "I feel very uncomfortable with their past, but neither of them is thought of as horrible types now - so far as most of us know, they are legitimate members of the community."

Why, exactly, can Ayers and Dohrn be seen as "legitimate members of the community"? How is it that they get prestigious university jobs when even the whisper of neocon tendencies is toxic in academia?

The question of why Ayers isn't in jail is moot; he was never prosecuted for the Weather Underground's bombing campaign. Still, Ayers is unrepentant about his years spent waging war against the United States. "Kill all the rich people. Break up their cars and apartments. Bring the revolution home, kill your parents, that's where it's really at," Ayers was widely quoted as saying at the time.

Ayers is merely symptomatic. Academia, the arts, even business have readmitted one former (and a few not-so-former) violent radical after another. Thomas W. Jones, a leader in the armed takeover of Cornell University's student union in 1969, rose to the top of Citigroup and once ran TIAA-CREF, the pension fund of some of the very academics he threatened.

Hillary Clinton had her own brush with violent radical leftists during her years at Yale Law. The New Haven, Conn., trial of Black Panthers - racist paramilitary criminals who had murdered police and civilians in cold blood - was a cause celebre for the Yale Review of Law and Social Action, the journal she helped edit. According to some accounts, Clinton volunteered to monitor the trial to aid Black Panther leader Bobby Seale's defense, and one of Seale's lawyers, a major radical, was sufficiently impressed to offer her an internship.

I don't think such associations should necessarily cost people their careers or place in polite society, particularly if some sort of contrition is involved. But shouldn't this baggage cost something?

Why is it only conservative "cranks" who think it's relevant that Obama's campaign headquarters in Houston had a Che Guevara-emblazoned Cuban flag hanging on the wall? Indeed, why is love of Che still radically chic at all? A murderer who believed that "the U.S. is the great enemy of mankind" shouldn't be anyone's hero, never mind a logo for a line of baby clothes. Why are Fidel Castro's apologists progressive and enlightened but apologists for Augusto Pinochet frightening and authoritarian? Why was Sen. Trent Lott's kindness to former segregationist Sen. Strom Thurmond a scandal but Obama's acquaintance with an unrepentant terrorist a triviality?

I have my own answers to these questions. But I'm interested in theirs. In the weeks to come, maybe reporters can resist the temptation to repeat health-care questions for the billionth time and instead ask America's foremost liberal representatives why being a radical means never having to say you're sorry.